BLOG TOUR - The Girl She Wanted 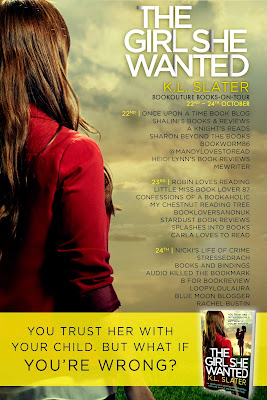 What if my sister is unstable and everyone can see it but me? What was she really doing standing over Florence’s cot in the middle of the night?
Alexa has always looked up to her older sister Carrie. Carrie lives in Alexa’s family home, and adores her one-year-old niece Florence. Alexa doesn’t know how they would cope without her. So when Carrie is suspended from her job as a senior nurse, accused of the most terrible crime, Alexa reels in disbelief. Alexa knows how caring Carrie is, and as she watches Florence gurgling and cooing whenever Carrie is around, she knows her little girl is in safe hands.

Alexa’s husband doesn’t trust Carrie. He wants her out of the house, unable to ignore what people are saying about her. But when he suggests that Carrie could be a danger to their daughter, Alexa shuts him out. Nobody will ever come between her and her sister.

Then Florence is hurt while in Carrie’s care and Alexa at last starts to wonder. Alexa has always wanted to protect Carrie from the past they have hidden. But does Alexa know what Carrie wants? And will the secret that has kept the sisters together now destroy her little girl?

A completely gripping rollercoaster of a read about the darkness families hide behind closed doors. Fans of Gone Girl and The Girl on the Train will be hooked on The Girl She Wanted. 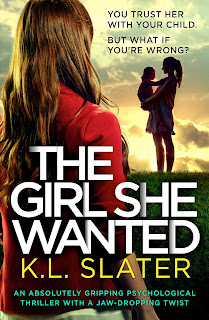 Title:   The Girl She Wanted
Author:  K. L. Slater
Publisher:  Bookouture
Genre:   Psychological Thriller
Format:  Kindle ARC
No. of Pages:   319
Date of Publication:   October 22, 2020
My Rating:   4 Stars
Alexa and her husband Perry are having some problems and it seems that their primary difficulties is that Alexa are due to the fact that Alexa is supporting her troubled older sister Carrie above all else. If Perry had his way he would insist that Carrie leave their home. Instead, after Carrie's marriage ended, Alexa invited Carrie to stay with them and their toddler daughter Florence. Alexa loves the bond that Carrie and Florence shares. Furthermore, Perry works away from home for weeks at a time on an oil rig, so Alexa enjoys having extra help with the baby.
However, one day the police arrive and they take Carrie away for questioning. Alexa is quite concerned, but so relieved that Perry is currently away. She knows that if he knew Carrie had any issues that concerned the police, she would have no choice but to ask Carrie to leave. Alexa is utterly shocked when she learns that Carrie might have been involved in the death of two patients. Carrie is a senior nurse at a nearby hospital and the deaths proved to be unusual. Carrie is not charged, but she is suspended from her job. Alexa is very concerned as to how to tell Perry, all while trying to figure out a way to get information and to help Carrie.
When Florence is hurt under Carrie's care, Alexa begins to wonder, and she knows she must inform Perry as to what is going on. Could Carrie have indeed been responsible for the deaths at the hospital? Could the fact that Florence was hurt be due to Carrie's actions? Then there is the fact that there is a hidden secret between Alexa and Carrie, and if the truth came out, so much could be lost, and at the very least, the safety of Florence.
I love the way that this book was written. I wanted to believe Carrie guilty of wrongdoing from the very start, so I love the winding trail that this book took to get my feelings so involved. I was captivated from beginning to end, even to the point that Perry began to raise doubts with me. When an author can keep me on my toes and invested in the characters, then I count it as a win for me. Actually, every book I have read by K. L. Slater has managed to evoke strong feelings in me while reading, and this book is right up there with the ones I've read previously by her.
Many thanks to Bookouture and to NetGalley for this ARC for review. This is my honest opinion.
ABOUT THE AUTHOR: 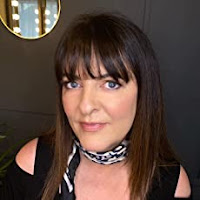 For many years, Kim sent her work out to literary agents but never made it off the slush pile. At the age of 40 she went back to Nottingham Trent University and now has an MA in Creative Writing.Before graduating, she received five offers of representation from London literary agents which was, as Kim says, ‘a fairytale … at the end of a very long road!’Kim is a full-time writer and lives in Nottingham with her husband, Mac.https://www.facebook.com/KimLSlaterAuthor/https://twitter.com/KimLSlater