Review - In a Holidaze 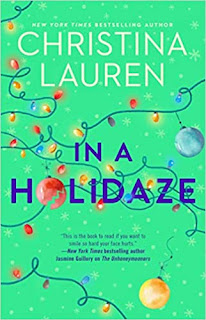 Title:   In a Holidaze

One Christmas wish, two brothers, and a lifetime of hope are on the line for hapless Maelyn Jones in In a Holidaze, the quintessential holiday romantic novel by Christina Lauren, the New York Times bestselling author of The Unhoneymooners.

It’s the most wonderful time of the year…but not for Maelyn Jones. She’s living with her parents, hates her going-nowhere job, and has just made a romantic error of epic proportions.

But perhaps worst of all, this is the last Christmas Mae will be at her favorite place in the world—the snowy Utah cabin where she and her family have spent every holiday since she was born, along with two other beloved families. Mentally melting down as she drives away from the cabin for the final time, Mae throws out what she thinks is a simple plea to the universe: Please. Show me what will make me happy.

The next thing she knows, tires screech and metal collides, everything goes black. But when Mae gasps awake…she’s on an airplane bound for Utah, where she begins the same holiday all over again. With one hilarious disaster after another sending her back to the plane, Mae must figure out how to break free of the strange time loop—and finally get her true love under the mistletoe.

Jam-packed with yuletide cheer, an unforgettable cast of characters, and Christina Lauren’s trademark “downright hilarious” (Helen Hoang, author of The Bride Test) hijinks, this swoon-worthy romantic read will make you believe in the power of wishes and the magic of the holidays.

What happens when you wish something would never end? That is what Maelyn Jones is about to discover. For her entire life, Mae and her family have been spending Christmases with a couple of other families at a delightful Christmas cabin in Utah. Mae knows that this will be the last holiday that they will spend together. And for a book that is said to be Love Actually meets Groundhog Day, Mae’s wish is that this holiday vacation continue to occur year after year.

Mae’s simple wish leads to a sudden car crash as she is driving away from the cabin. She blacks out. Next thing Mae knows, she is back on the airplane headed to Utah - only to repeat the same holiday week time and again. Truthfully, Mae would rather forget one very specific event of said week, a disastrous kiss that shakes the foundation of perfect memories.

Unfortunately for Mae, as she is destined to repeat the same fiasco over and over again, she is determined to break this continual loop that is beginning to drive her crazy. While trying to figure out why a simple wish would land her in a time traveling loop, Mae is also realizes that keeping conversations straight is rather dizzying in the varying timelines.

With a mix of drama and humor, along with a rather Hallmark-like romance, have fun suspending belief as I did in this delightful book by the prolific duo that is none other than Christina Lauren.