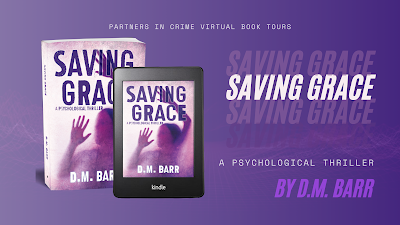 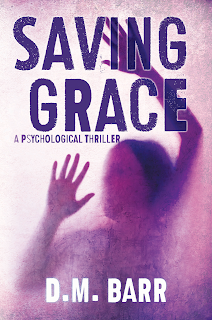 Grace Pierrepoint Rendell, the only child of an ailing billionaire, has been treated for paranoia since childhood. When she secretly quits her meds, she begins to suspect that once her father passes, her husband will murder her for her inheritance. Realizing that no one will believe the ravings of a supposed psychotic, she devises a creative way to save herself – she will write herself out of danger, authoring a novel with the heroine in exactly the same circumstances, thus subtly exposing her husband's scheme to the world. She hires acclaimed author Lynn Andrews to help edit her literary insurance policy, but when Lynn is murdered, Grace is discovered standing over the bloody remains. The clock is ticking: can she write and publish her manuscript before she is strapped into a straitjacket, accused of homicide, or lowered six feet under?

With a cast of secondary characters whose challenges mirror Grace's own, Saving Grace is, at it's core, an allegory for the struggle of the marginalized to be heard and live life on their own terms.

"A psychological thriller with more than enough twists, turns, and misdirection to keep even the most jaded reader turning pages all night long."

From when she was a child, Grace Pierrepoint Rendell was deemed mentally unfit. Her diagnoses included paranoia and psychosis. This was by her father and this action was continued by her husband. Grace managed to break away from her father as a young adult when she went away to collage. However, it did not take her very long to meet the man who would soon become her husband. Although Grace managed to develop a career, becoming the mother of two boys sidelined her more than she would have liked. Throughout her life, however, one thing did not change, and that was her lifelong psychological treatment and a host of medications.
At some point, Grace decided to take her destiny into her own hands. She managed to fool her psychiatrist and husband. When visiting her ailing father, her deception did not come as easy. While reading this book - whether it was Grace's father, or her husband - I kept getting vibes of the classic movie Gaslight. Grace often questioned her own sanity, even during moments of obvious clarity. That is how good the ploys used against her were.
Once Grace's father's health became extremely serious, Grace knew that the likelihood of her becoming beneficiary of his multi-million dollar estate might not happen for her. In fact, she began to wonder if indeed her husband would "get rid of her" in order to collect said millions. So, Grace develops a scheme that will save her very life as well as her future. This plan included penning a fictional yet literal account that, if published, would inform any and all of the plans being made against her.
Despite her industriousness regarding writing her manuscript, things began happening that began to spiral out of her control, thus bringing her ever closer to danger. In this thrilling book there is a race against time that Grace has to manage. Fortunately she finds friends who are willing to stand by her. Will the manuscript be written in time to save her? With the connection I felt to Grace, some of the supporting characters, and the aforementioned movie, I found this book to be quite an entertaining read.
Many thanks to Black Rose Writing for this ARC for review. This is my honest opinion.

One felony was all it took to convince Andrea Lin she was better suited to committing crime on paper than in person. As renowned mystery author Lynn Andrews, she understood conflict equaled good drama. Like her readers, she should have expected the hiccups, even relished them. What she hadn’t counted on was the accompanying agita, especially while sitting in her Bergen County kitchen, far from the action at the Bitcoin Teller Machine.

Her one job had been to place a single phone call when the money hit and tell the hacker to lift the encryption on Grace’s computer. Trouble was, her dozen calls remained unanswered until a few minutes ago, throwing their meticulous plan off schedule.

Andrea stroked the blue-gray Nebulung purring on her lap and tried to ignore the churning in her stomach. “Denver, the next time I consider helping a sibling with some crazy scheme, you have my permission to use my leg as a scratching post until I come to my senses. Agreed?”

Denver looked up, his green eyes filled with innocence, and answered with a single meow before leaping onto the table toward her plate of shortbread cookies.

“I’ll take that as a yes.” She sipped her tea, willing the sugar to sweeten the acrid taste in her mouth. The phone interrupted her meditation. No doubt a check-in from her brother, the extorter-in-chief.

“I figured you’d have called by now. Everything on track?” Joe’s strained voice conveyed his own jangled nerves. They’d agreed to be vague when communicating. In these days of Siri and Alexa, anyone could be listening.

“Finally. Took forever to get through to our friend, but she said she’d take care of ‘our project’ as soon as her meetings wrapped up. From here on out though, I’m sticking to fiction. Real-life intrigue is too stressful.”

Andrea missed Joe’s response, instead perplexed by her cats’ sudden change of behavior. Denver had tilted his head and leapt from the table; Vail and Aspen sat frozen, ears perked, staring toward the foyer. Then she heard it too, the sound of papers shuffling in the living room. She leaned forward, muscles taut, hackles raised, ready to pounce. “Joe, hold on a sec. I think someone’s in the house. I’ll call you back later.”

“Wait, what? Andrea??” Silence. The connection was dead.

After twenty minutes of weaving in and out of rush-hour traffic to travel one mile, Joe “Hack” Hackford pulled up outside his sister’s Ridgewood home. Adrenaline pumping on overdrive, he jumped from his car and sprinted toward the house. Door wide open—not an encouraging sign. He steeled his nerves and hastened inside. The living room looked like a hurricane’s aftermath, with furniture overturned and papers littering the carpets and floor.

“Andrea? Are you here?” He rushed into the kitchen, which lacked any signs of their celebratory dinner—no spaghetti boiling on the stove, no cake rising in the oven. Only the door to the backyard ajar and a shriek emanating from the next room, piercing the eerie silence. Hair stiffening at the back of his neck, he raced into the dining room where a redheaded woman stood frozen, staring across the room.

“Who the hell are you?” he growled.

The stranger remained wide-eyed and unresponsive. He followed her gaze to the floor, where he witnessed the unthinkable. His beloved sister lay in the corner, surrounded by a pool of blood, a kitchen knife stuck in her chest. Her eyes remained fixed on the ceiling. A trio of feline guards circled her lifeless body.

Hack’s knees turned to jelly, and he grabbed onto a chair for support, forcing back the remains of the snack he’d consumed only minutes earlier. Once the initial shock waned, he reverted his attention back to the intruder. At second glance, she did look somewhat familiar, though the woman he’d met a few weeks back—the missing heiress whose computer they’d just hacked—was brunette. Had she uncovered their con? With a bolt of fury, he reached forward and pulled the wig from her head. A thousand questions zigzagged in his brain, but only one forced its way past his lips:

This is a rafflecopter giveaway hosted by Partners in Crime Virtual Book Tours for D.M. Barr. There will be 1 winner of one (1) Amazon.com Gift Card. The giveaway begins on October 12, 2020 and runs through November 15, 2020. Void where prohibited. 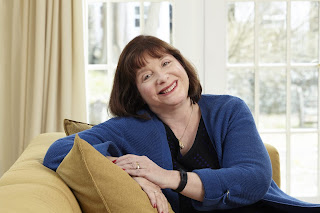 My background includes stints in travel marketing, travel journalism, meeting planning, public relations and real estate. I was, for a long and happy time, an award-winning magazine writer and editor. Then kids happened. And I needed to actually make money. Now they're off doing whatever it is they do (of which I have no idea since they won't friend me on Facebook) and I can spend my spare time weaving tales of debauchery and whatever else tickles my fancy.

The main thing to remember about my work is that I am NOT one of my characters. For example, as a real estate broker, I've never played Bondage Bingo in one of my empty listings or offed anyone at my local diet clinic. And I haven't run away from home in fear that my husband was planning to off me.

But that's not to say that I haven't wanted to…