BLOG TOUR - Under a Sky on Fire 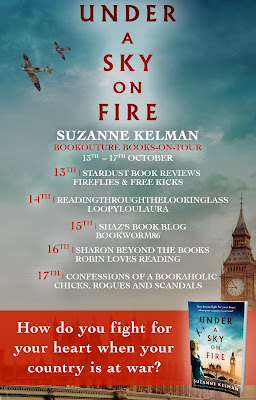 DESCRIPTION:
The child stood in the road wearing a blue flannel nightie, her feet bare and dirt-splattered. Her blonde flyaway hair was golden, aglow from the fires that lit her up from behind. Stumbling over, Lizzie reached her side. The little girl’s eyes were closed, her palms facing upwards. If she’d been in church, you would have thought she was praying.
September 1940, London
As the German Luftwaffe begin a terrifying bombing campaign that will come to be known as the Blitz, thousands are evacuated to safety. But Lizzie Mackenzie finds herself heading towards London.
She knows she must help in the war effort. But she has another reason for leaving the security of her Scottish village: the illegitimate child she gave up for adoption nearly five years before is somewhere in the city. And – as the bombs rain down – she will stop at nothing to find her and make sure her little girl is safe.
Then she finds herself trapped in a dark theatre during a bombing raid, where she meets Pilot Officer Jack Henson. Against all her instincts, she falls in love. But what chance is there for that love to flourish? Because if he discovers the secret shame of her past, he may never forgive her. And with Jack facing the enemy every day in the sky, and Lizzie’s job guiding pilots into battle – life and love has never felt so fragile.
Until a chance encounter with a little orphaned girl changes everything, forcing Lizzie to ask herself what truly matters. Because, in the darkest days of war, every life counts. And – when tragedy strikes – saving one child’s life might just give Lizzie a reason to survive…
An unforgettable story about sacrifice, love and heartbreak set in World War Two London during the Blitz. If you liked All the Light We Cannot See, My Name is Eva and A Fire Sparkling, you will love Under a Sky on Fire.
BUY LINKS:
Amazon: https://geni.us/B08CY521H9Social
Apple: http://ow.ly/Gr4650AyHac
Kobo: http://ow.ly/YIPn50AyH8i
Google: http://ow.ly/YqVx50AyNJA
MY THOUGHTS: 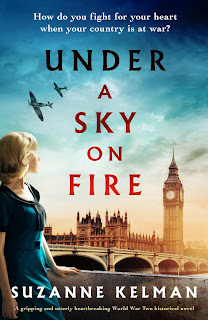 Title:   Under a Sky on Fire
Author:  Suzanne Kelman
Publisher:  Bookouture
Genre:   Historical Fiction
Format:  Kindle ARC
No. of Pages:   361
Date of Publication:  October 13, 2020
My Rating:   4 Stars
It is September 1940 in London and Lizzie McKenzie has two chances in front of her. She can play a very big role in the war effort. Mote importantly, however, she has the opportunity to look for a daughter she was forced to give up for adoption when she was a young teen. When she became pregnant at fourteen, her parents sent her away and she only saw her young daughter once, and very briefly at that. Due to her parents' shame, Lizzie lived with her aunt and uncle ever since, and was especially close to them.
Now a young woman performing secretarial duties she gets the opportunity to perform special duties for the prime minister, Winston Churchill. While bombing has become rampant in London due to the war and thousands are rushing away from London, Lizzie is headed into the fray so to speak. While intent on doing a good job in helping soldiers, Lizzie already plans to use her time in London to look for her daughter.
One day, however, after a bomb goes off, Lizzie spots a young girl all alone. She grabs the girl and takes her to safety. When she tries to take the child to the authorities, things are such a mess with so many lives lost and so much confusion, that she ends up keeping the little girl longer than she planned. All the while she continues to search for her daughter.
Something else special happens to Lizzie. She meets a pilot named Jack Henson and falls in love. Her special job - that of guiding pilots into battle - becomes ever more important because she knows of the grave danger Jack faces in his job. So Lizzie balances her job, her new relationship with Jack, and the care of the little girl, all while never once giving up hope of finding her daughter.
This tender story was equally captivating and heartbreaking. It proved that intense love could indeed flourish during those tenuous times. But it also showed the danger that swallowed so many lives during that terrible time in history. Suzanne Kelman did a fine job of writing this touching story with a fine balance between the two.
Many thanks to Bookouture and to NetGalley for this ARC for review/. This is my honest opinion.
ABOUT THE AUTHOR: 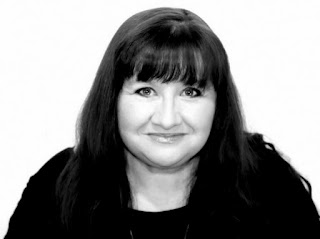 Suzanne Kelman is an Amazon International Bestselling author in America, United Kingdom, Canada, and Australia. Her WW2 historical fiction books "A View Across the Rooftops" and "When We Were Brave," together have sold over 150,000 copies and are published by Bookouture - an imprint for Hachette U.K. Her third WW2 Book, Under A Sky on Fire, publishes October 13th, 2020. Kelman's books have also been translated into five languages.
She is also the author of the bestselling book, "The Rejected Writers' Book Club", published by Lake Union, which is the first book in the Southlea Bay series. Other books in the series include, "Rejected Writers Take the Stage" and "The Rejected Writers' Christmas Wedding".
Kelman is an award-winning writer/screenwriter whose accolades include the Best Comedy Feature Screenplay Award from the L.A. International Film Festival, the Gold Award from the California Film Awards, and the Van Gogh Award from the Amsterdam Film Festival.
In 2015 her script, Held, was recognized by the Academy of Motion Pictures and was shortlisted to the top ten in the Academy Of Motion Pictures Nichols Fellowship competition.
As well as a screenwriter and a published author, Suzanne is also a playwright, and her award-winning comedy play, "Over My Dead Body", had its World Premiere at Outcast Theatre in Washington, Fall 2019.
Born in the United Kingdom, Suzanne now resides in Washington State.
Please sign up for her newsletter to stay in touch - https://www.suzannekelmanauthor.com
Author Social Media Links:
Facebook: https://www.facebook.com/suzkelman
Twitter: https://twitter.com/suzkelman
Website: https://www.suzannekelmanauthor.com