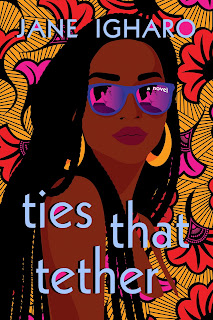 Title:   Ties That Tether
Author:  Jane Igharo
Publisher:  Berkley
Genre:   Multicultural Interest; Romance
Format:  Kindle ARC
No. of Pages:   336
Date of Publication:   September 29, 2020
My Rating:   5 Stars
DESCRIPTION:
When a Nigerian woman falls for a man she knows will break her mother’s heart, she must choose between love and her family.
At twelve years old, Azere promised her dying father she would marry a Nigerian man and preserve her culture, even after immigrating to Canada. Her mother has been vigilant about helping—well forcing—her to stay within the Nigerian dating pool ever since. But when another match-made-by-mom goes wrong, Azere ends up at a bar, enjoying the company and later sharing the bed of Rafael Castellano, a man who is tall, handsome, and…white.
When their one-night stand unexpectedly evolves into something serious, Azere is caught between her feelings for Rafael and the compulsive need to please her mother. Soon, Azere can't help wondering if loving Rafael makes her any less of a Nigerian. Can she be with him without compromising her identity? The answer will either cause Azere to be audacious and fight for her happiness or continue as the compliant daughter.
Link to purchase the book
MY THOUGHTS:
In this excellent debut novel by Jane Igharo, a young Nigerian woman is being pressured by her mother to marry another Nigerian, with hopes of never forgetting her heritage. However, businesswoman Azere has her own mind and while on a business trip she has a one-night stand. Imagine her shock when she discovers that the man, Rafael Castellano, a gorgeous white man, is now working at her advertising firm. No chance of forgetting their night together.
Meanwhile, Azere's mother will not let her forget her heritage for one moment, and has a line of available Nigerian men for Azere to consider marriage. Not a single one of them is promising enough to Azere, with the exception of her first love - a man she cannot stomach now. More than that, something happened between Azere and Rafael on their night together, thus forcing Azere to consider long-range life choices.
Azere loves and respects her mother, and she understands that her mother does not want her to forget who she is and she does her best to honor her mother. However, her heart has been compromised and she must choose between love, honor and loyalty. Is her happiness really her due? If it is, she could lose her relationship with her mother. As a strong woman, one who has always known her own mind, she is truly in a dilemma now.
This book touches strongly on tradition, family and the culture that binds everyone together. It also explores matters of the heart, even when pain is part of the equation.  This is something that many families face, especially when an interracial relationship begins to be formed. Now you have two cultures clashing. When one appears to be dominant then the road to be traveled becomes paved with uncertainty. The question of love and strength of heart comes into play with Azere and Rafael.
I was quite moved by this story. The romantic in me wanted love to be the deciding factor, but the culture clash between Azere and Rafael was real. Also, the honor Azere wanted to show her mother went a long way, to the point of very difficult decision making. Was culture more important than a future based on love and commitment? Azere had something else to consider this entire time, and that was fulfilling her father's dying wish for her to marry a Nigerian man, something her mother never let her forget.
There was another layer to this book involving Rafael and his family and culture. How Rafael and Azere came together to explore their connection was a difficult trial, but as this was a romance, there was a happy ending, even if the trail was not an easy one to traverse.
Many thanks to Berkley and to NetGalley for this ARC for review. This is my honest opinion.
ABOUT THE AUTHOR:

Jane Abieyuwa Igharo was born in Nigeria and immigrated to Canada at the age of twelve. She has a journalism degree from the University of Toronto and works as a communications specialist in Ontario, Canada. When she isn't writing, she's watching "Homecoming" for the hundredth time and trying to match Beyoncé's vocals to no avail.