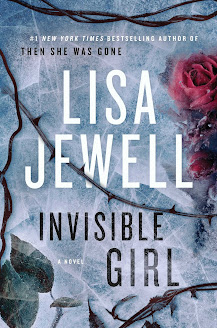 Title:   Invisible Girl
Author:  Lisa Jewell
Genre:   Psychological Thriller
Publisher:   Atria Books
Format:  Kindle ARC
No. of Pages:  368
Date of Publication:  October 13, 2020
My Rating:   5 Stars
DESCRIPTION:
The author of the “rich, dark, and intricately twisted” (Ruth Ware, New York Times bestselling author) The Family Upstairs returns with another taut and white-knuckled thriller following a group of people whose lives shockingly intersect when a young woman disappears.
Owen Pick’s life is falling apart.
In his thirties, a virgin, and living in his aunt’s spare bedroom, he has just been suspended from his job as a geography teacher after accusations of sexual misconduct, which he strongly denies. Searching for professional advice online, he is inadvertently sucked into the dark world of incel—involuntary celibate—forums, where he meets the charismatic, mysterious, and sinister Bryn.
Across the street from Owen lives the Fours family, headed by mom Cate, a physiotherapist, and dad Roan, a child psychologist. But the Fours family have a bad feeling about their neighbor Owen. He’s a bit creepy and their teenaged daughter swears he followed her home from the train station one night.
Meanwhile, young Saffyre Maddox spent three years as a patient of Roan Fours. Feeling abandoned when their therapy ends, she searches for other ways to maintain her connection with him, following him in the shadows and learning more than she wanted to know about Roan and his family. Then, on Valentine’s night, Saffyre Maddox disappears—and the last person to see her alive is Owen Pick.
With evocative, vivid, and unputdownable prose and plenty of disturbing twists and turns, Jewell’s latest thriller is another “haunting, atmospheric, stay-up-way-too-late read” (Megan Miranda, New York Times bestselling author).
Link to purchase the book
MY THOUGHTS:
Owen Pick is running out of places to turn. His mother passed away. His father remarried and turned his back on him. His aunt treats him horribly. Meanwhile, Owen's past was not spotless. He has lost his job as a geography teacher due to sexual misconduct accusations. Then a young woman goes missing, and Owen is charged with her kidnapping and possible murder. Owen turns to the internet for advice, and he joins a forum where he meets a woman named Bryn.
Meanwhile, there is a family that lives across the street from Owen. The family is far from perfect. The father, Roan Fours is a psychologist and works with teens who have experienced trauma. The wife, Cate is a physiotherapist but her time is spent caring for her family, including two teens. Their home life is far from perfect. Also, they have never felt comfortable with Owen as their neighbor.
Their son, Josh, befriends Roan's former patient, Saffyre Maddox. Saffyre experienced great loss and tragedy. Saffyre has never been able to accept the fact that Roan would not treat her any longer. She is furious. How dare he concluded treatment and called her cured. As far as she is concerned, nothing could be further from the truth. So, she begins to stalk Roan, thus becoming an Invisible Girl. However, Saffyre disappears on Valentine's Day. Due to the fact that Owen was the last to see her, he is the prime suspect.
This book is literally filled with twists and turns - yes, an overused description, but that is the best way to describe it. This is something that Lisa Jewell excels in. There are some things that become slowly revealed in this story. I love how this story is layered - whether it is about Owen, Josh, Roan or Saffyre. This thrilling book had an exciting conclusion, but left me with my mouth hanging open nonetheless. WHY did she do that, lol? This is one of the best books I have read this year. Now I have to wait for her next release!!!
Many thanks to Atria and to NetGalley for this ARC for review. This is my honest opinion.
ABOUT THE AUTHOR: