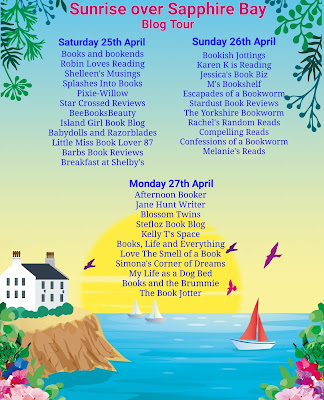 Today I am pleased to be a part of the Blog Tour for Sunrise Over Sapphire Bay by Holly Martin.

Fall in love with the beautiful Jewel Island this summer, where the sapphire sea sparkles, the golden sun warms your skin and the islanders melt your heart. From the bestselling author of The Little Village of Happiness comes Holly Martin’s most romantic novel yet.

Aria Philips has lived on Jewel Island all of her life. Even when her sisters Clover and Skye left its stunning shores for bigger and better things, Aria stayed to help her father run their family hotel.

A year after her father’s death Aria’s done everything she can to keep things afloat but the hotel has long been struggling to make a profit. With so few guests Aria risks losing the only home she’s ever had.

Noah Campbell earned his fortune from making hotels a success, and he also just happens to be staying on Jewel Island this summer. Could he be the answer to Aria’s problems? If only he hadn’t kissed her under the willow tree the year before and never called her again. It had been the most incredible kiss of her life, but clearly business and pleasure should never be mixed.

As gorgeous and charming as Noah may be, Aria vows to keep things professional while she seeks his help. But for the past year Noah has been keeping a secret and his return to Jewel Island is about to change Aria’s life forever… 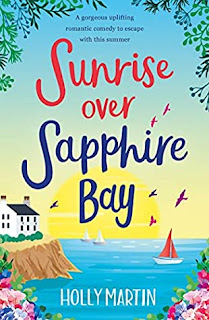 Aria Phillips never left Jewel Island, even managing a struggling hotel after her father's death. Her sisters Clover and Skye left a long time ago, but they are back now while the future of the hotel is uncertain. Even though there are very few guests, Despite everything, Aria is putting plans forward for the annual Festival of Lights. However, what Aria and her sisters don't know is that despite all of their work, there are plans in place that could cost them their hotel.

There is one guest at the hotel that causes Aria's heart to flutter, Noah Campbell. He is rich beyond reason due to buying and completely revamping hotels. What's more is that he and Aria have a connection that could definitely bode well for their future. However, with all the changes taking place, Aria has made it her aim to keep things professional. Will she manage to do that?

In this touching story by Holly Martin family means everything. I love the bond between Aria and her sisters. All the while the romance that bloomed between Aria and Noah was quite touching. Sunrise Over Sapphire Bay is the first book in the Jewel Island series. As much as I loved Aria and Noah finding their chance at happiness, I look forward to Clover and Skye finding the opportunity to do the same.