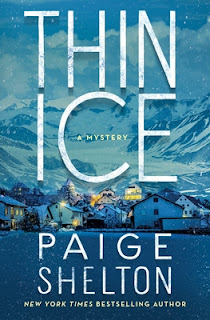 First in a new series set in Alaska from beloved author Paige Shelton, Thin Ice will chill your bones.

Beth Rivers is on the run - she's doing the only thing she could think of to keep herself safe. Known to the world as thriller author Elizabeth Fairchild, she had become the subject of a fanatic's obsession. After being held in a van for three days by her kidnapper, Levi Brooks, Beth managed to escape, and until he is captured, she's got to get away. Cold and remote, Alaska seems tailor-made for her to hideout.

Beth's new home in Alaska is sparsely populated with people who all seem to be running or hiding from something, and though she accidentally booked a room at a halfway house, she feels safer than she's felt since Levi took her. That is, until she's told about a local death that's a suspected murder. Could the death of Linda Rafferty have anything to do with her horror at the hands of Levi Brooks?

As Beth navigates her way through the wilds of her new home, her memories of her time in the van are coming back, replaying the terror and the fear--and threatening to keep her from healing, from reclaiming her old life again. Can she get back to normal, will she ever truly feel safe, and can she help solve the local mystery, if only so she doesn't have to think about her own?

Miraculously, Beth Rivers managed to escape the clutches of a madman. Although she uses a pseudonym as a thriller writer, the fanatic managed to discover her identity and kidnap her. She goes to the furthest place she can to hide from the man, and that is to the remotest part of Alaska. Despite her feeling safe, a local murder near where she is staying makes her worry that the killer is again close on her heels.

This thrilling story sets off at breakneck speed and the tension never lets up. Beth does what she can to investigate the small town's residents in order to flush out the man that took her, all while desperately striving to stay alive. I couldn't tap my Kindle fast enough to see if she would be able to continue to elude him. Now I am eager to continue the series with Cold Wind, which is set for release at the end of the year.

Many thanks to Minotaur Books and to NetGalley for this ARC for review. This is my honest opinion. 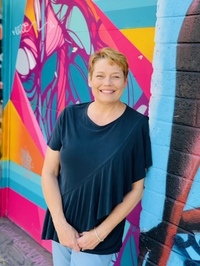 My husband and I moved to Arizona in February of 2015 but before that we lived in Salt Lake City, Utah. I moved there for an advertising job right after college. I hadn't planned on staying twenty-seven years, but I met Charlie, we got married, we had our son, and a really terrific life happened. I loved Utah, and those twenty-seven years were wonderful. Our son finished college and is working in Missouri now, and we're enjoying our new and very desert adventure.

As a kid I moved around a lot. My dad was a football coach, mostly throughout the Midwest but we spent one year in Portales, New Mexico. A couple of things stood out and and stayed with me that year. 1 - We lived in a haunted house. 2 - The southwest rubbed off on me and I have loved it ever since.

I did get to start and finish high school in one place - Des Moines, Iowa, which is a wonderful city even if the humid climate always was a challenge. I ended up going to college there too, at Drake University where I studied journalism. I made some great friends those years. I'm glad to still be in touch with many of them.


I have only ever wanted to be a writer. I've had good jobs, bad jobs, great bosses, and terrible bosses. Through it all and ever since I was seven I have only wanted to write. I'm grateful to have the opportunity now. If you're interested in my road to becoming a published author, I posted the story on my agent's blog. Click here -