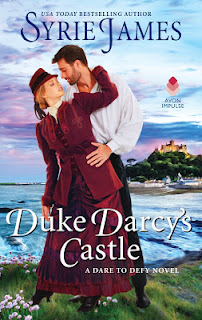 Lance Granville, the Tenth Duke of Darcy, was none too happy to give up his career in the Royal Navy to inherit the family title, complete with an ancient castle he needs to renovate. When an architect arrives on his doorstep, Darcy is astonished to discover that she’s a woman.

Kathryn Atherton has one goal: to become the first woman architect in Britain. Marriage doesn’t figure in her plans. Despite the odds, her schooling is behind her. Now she needs experience. When she’s sent to a small tidal island in Cornwall to remodel a castle, the last thing Kathryn wants is to be attracted to its roguishly handsome owner.

Kathryn is determined to keep things professional, but the sizzling attraction between her and the duke quickly blazes out of control. When Darcy learns that Kathryn is an heiress whose fortune would save St. Gabriel’s Mount, he wages the most important battle of his life: to woo and win the woman who’s captured his heart. But (in an homage to Austen), the Duke’s first proposal is so Darcyesque, he is refused. In any case, duchesses can’t be architects. And Kathryn has worked too long and too hard to give up her career for anyone …. 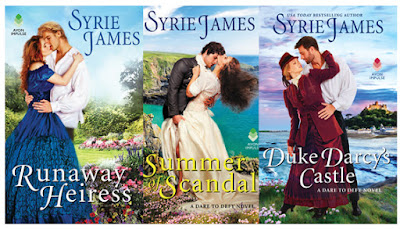 Three American heiresses defy their family’s wishes, and social convention, to strike out and find their own happiness in late Victorian Cornwall.

Brainy and college-educated, American heiress Alexandra Atherton will do anything to avoid marriage to the English peer her mother has chosen for her—even abandon the life of privilege she’s always known. But as her escape goes horribly wrong, Alexandra must invent a new identity to gain the help of a handsome stranger.

Summer of Scandal: A Dare to Defy Novel (Book 2)

An American heiress and an English earl fight against the conventions of society -- and their attraction to each other -- in the second book in the Dare to Defy series by USA Today bestselling author Syrie James.

Lance Granville has inherited the title of the Tenth Duke of Darcy and has had to leave the Royal Navy. Lance is in need of a bride. Part of this means that he must renovate his castle. However, the castle is falling apart and needs many changes, so the renovation needed is hardly a simple task. He hires an architect to complete the task, but imagine his shock when the architect is a woman, Kathryn Atherton.

Kathryn has fulfilled her dream of being an architect. She is an American heiress but that really means nothing to her. She is striving to create a career in a man's world. Having finished schooling and seeking a license, she intends on making a name for herself. Her work on her current task in Cornwall might open doors for her.

There is a problem that makes itself apparent from almost the moment she walks into the castle. Sparks fly between her and the Duke. Kathryn struggles to keep things professional. Lance has no intent on letting that happen. In addition to a passion that cannot be denied between them, Lance has a problem. He has a huge debt and marrying for money just might solve his problems. Can the two align their individual goals and keep their hearts intact?

Duke Darcy's Castle is the final book in the Dare to Defy trilogy and it is an enjoyable book, especially when the heart, with explosive passion, is at war with logic and goals. It was wonderful to see how Kathryn and Lance found their way to a happy ever after. I did read the second book in this series, The Summer of Scandal, which I also enjoyed, but each book does fine as a standalone novel. One thing I loved by both books that I have read is that these women are strong, articulate and independent. I love seeing women of that ilk in historical romances.

Many thanks to Avon Impulse and to Edelweiss for this ARC for review. This is my honest opinion.

SYRIE JAMES is the USA TODAY and Amazon bestselling author of thirteen novels of historical, contemporary, and young adult fiction and romance. Her books have hit many Best of the Year lists, been designated as Library Journal Editor’s Picks, and won numerous accolades and awards, including Best New Fiction by Regency World Magazine (the international bestseller “The Lost Memoirs of Jane Austen”), and the national Audiobook Audie for Romance (“The Secret Diaries of Charlotte Bronte”, also named a Great Group Read by the Women’s National Book Association). Los Angeles Magazine dubbed Syrie the “queen of nineteenth century re-imaginings,” and her books have been published in twenty languages. A member of the Writer’s Guild of America, Syrie is also an established screenwriter and playwright who makes her home in Los Angeles. An admitted Anglophile, Syrie has addressed audiences across the U.S., Canada, and the British Isles.