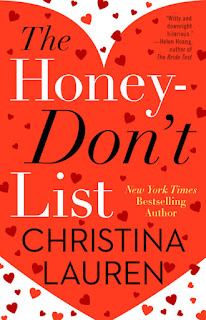 Carey Douglas has worked for home remodeling and design gurus Melissa and Rusty Tripp for nearly a decade. A country girl at heart, Carey started in their first store at sixteen, and—more than anyone would suspect—has helped them build an empire. With a new show and a book about to launch, the Tripps are on the verge of superstardom. There’s only one problem: America’s favorite couple can’t stand each other.

James McCann, MIT graduate and engineering genius, was originally hired as a structural engineer, but the job isn’t all he thought it’d be. The last straw? Both he and Carey must go on book tour with the Tripps and keep the wheels from falling off the proverbial bus.

Unfortunately, neither of them is in any position to quit. Carey needs health insurance, and James has been promised the role of a lifetime if he can just keep the couple on track for a few more weeks. While road-tripping with the Tripps up the West Coast, Carey and James vow to work together to keep their bosses’ secrets hidden, and their own jobs secure. But if they stop playing along—and start playing for keeps—they may have the chance to build something beautiful together…

Melissa and Rusty Tripp have a very lucrative and popular home design business. They have a public persona that they must display in order for an upcoming book launch. Sales would never get off the ground if the truth of their failing relationship was made public. As they prepare for this tour, they use two of their employees to travel with them in order to keep things looking as smooth as possible.

Carey Douglas has been with the company since she was sixteen while James McCann is relatively new, he soon finds out that his esteemed business degree from MIT might have as well have been tossed in the trash due to his current duties with the Tripps.

Neither Carey nor James appreciate the new duties and responsibilities that fall on their shoulders. They find it critical to keep the secrets of the Tripps failed marriage hidden, and this will allow them to hold on to their jobs. Meanwhile, it doesn't take very long for James and Carey to realize that their have mutual attraction between them.

Christina Lauren is the remarkable duo of two talented writers. They somehow manage to create likable and relatable characters. Writing characters that are supposed to be happily married who are anything but was done spot on. I loved the buildup of the romance between James and Carey and watching their story evolve was rather enjoyable.

I enjoy this pair of writers and have recently read another book of theirs, The Unhoneymooners, and look forward to reading much more by them in the future.