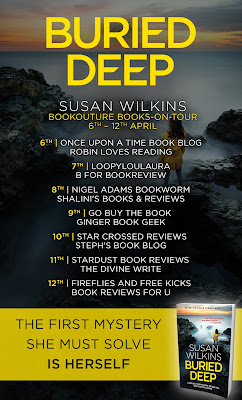 Today is my stop on the Blog Tour for Buried Deep by Susan Wilkins.

Megan has to climb round and step across the body to get a proper view. What’s left is like a chalk white mask in the rough shape of a face. The innocence is still there, and a hint of the cheekiness. But perhaps she is imagining that.

Detective Megan Thomas spent years undercover. It cost her marriage and her peace of mind, but she got the job done. Now she has to decide if she can go back to her life before, to a regular crime unit alongside other cops who have no idea about the fear that haunts her dreams. She’s still running from her memories. She doesn’t know how to stop.

Moving to Devon was meant to be a fresh start. She’s staying with her sister and swimming in the sea daily, battling the tides and letting the waves wash her past away. But she can’t outrun everything. First, the discovery of a body in a claustrophobic crime scene triggers a panic attack. And then, when she gets too emotionally involved in an attack on a local teenager, her boss pulls her off the case entirely.

When a body is found on the stretch of beach where she swims every day, Megan remembers why she joined the force, and what she’s fighting for… But how can she find justice for others, when she’s no longer sure of herself? 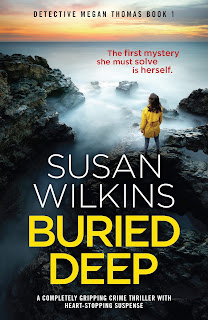 From undercover work back to being a detective. That is a simple description to the complicated situation Detective Megan Thomas is dealing with. Four years undercover came with cost to Megan. Having lost her cover and almost her life brought that job to a crashing end. Her marriage was ruined and she is overwhelmed with stress.

Hoping for a lighter workload, Megan hopes to ease into her new duties. One of the most relaxing things Megan to do at this point is swimming in the sea. This is a very cathartic activity, no matter how cold the water. When a body is found in a bunker near where she swims, the gruesome discovery has tainted the one thing that truly calms her. Just as Megan is about to dive into her first case, a second body is found - this one far too close where she takes her daily swim.

While Megan attempts to work the case, she immediately suffers a panic attack. Dealing with PTSD and the related trauma that goes along with it knocks her to her knees. The stress of working this crime is triggering for Megan.

As Buried Deep is the first book in a new series, no doubt readers will be able to see Megan's growth with regard to her feelings and how she copes with her triggers. I also look forward to see her progress with her new job and team. I love detective fiction especially when the primary protagonist is a real person with emotions and actions are easy to connect with. I look forward to the next book in the series.

Buried Deep was a well-written book that kept me interested and seeking clues, while I was unable to work things out on my own. I love when I am able to be surprised in a book and Susan Wilkins did a fine job with keeping me on my toes. 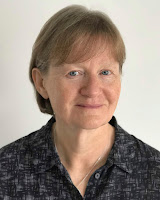 Susan worked for years in television drama, wrote for shows including Casualty, Heartbeat, Coronation Street and Eastenders and created the London-based detective drama South of the Border.

Her gritty, Essex-based gangster trilogy - THE INFORMANT, THE MOURNER and THE KILLER - has been compared to Martina Cole and Kimberley Chambers and described as "blazingly brilliant" (Sunday Mirror).

IT SHOULD HAVE BEEN ME, her fourth book, is a twisty psychological thriller, featuring police detective Jo Boden, an ambitious cop still grieving for a murdered sister.

For 2020 a completely gripping new series from Susan introduces the tough and determined Detective Megan Thomas. For fans of Ann Cleeves, LJ Ross and Mari Hannah, this will keep you hooked from the first page to the last.

Writing as S.J. Wilkins, A KILLER'S HEART - a tense and timely political thriller, is now available on Kindle.