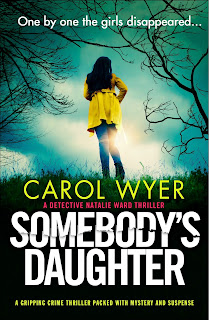 But when a wealthy young woman is found murdered the next morning, the word ‘guilty’ scrawled on her forehead, Natalie realises that the case is more complex than she first thought. Determined to establish a connection between her three victims, Natalie wastes no time in chasing down the evidence, tracing everyone who crossed their paths. Then, a key suspect’s body turns up in the canal, a mole in Natalie’s department leaks vital information and everything seems to be against her. Can Natalie stop this clever and manipulative killer before they strike again?

An unputdownable crime thriller from an Amazon bestselling author that will have you sleeping with the light on. This gripping rollercoaster ride is perfect for fans of Angela Marsons, Rachel Abbott and Rachel Caine. Prepare to be totally hooked!
Posted by Robin Loves Reading at 4/16/2020 11:45:00 AM