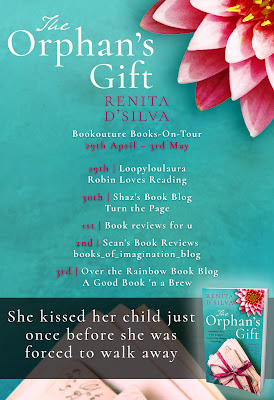 Today is my stop on the Blog Tour for The Orphan's Gift by Renita D'Silva.

She allows herself to kiss her perfect child just once. She wraps the baby in her last gift: a hand-knitted cardigan, embroidered with a water lily pattern. ‘You’re better off without me,’ she whispers and although every step breaks her heart, she walks away.

1910, India. Young and curious Alice, with her spun-gold hair, grows up in her family’s sprawling compound with parents as remote as England, the cold country she has never seen. It is Raju, son of a servant, with whom she shares her secrets. Together, their love grows like roses – but leaves deep thorns. Because when they get too close, Alice’s father drags them apart, sending Raju far away and banishing Alice to England…

1944. Intelligent and kind Janaki is raised in an orphanage in India. The nuns love to tell the story: Janaki’s arrival stopped the independence riots outside the gates, as the men on both sides gazed at the starry-eyed little girl left in a beautiful hand-knitted cardigan. Janaki longs for her real mother, the woman who was forced to abandon her, wrapped in a precious gift…

Now old enough to be a grandmother and living alone in India, Alice watches children play under the tamarind trees, haunted by the terrible mistake she made fifty years ago. It’s just an ordinary afternoon, until a young girl with familiar eyes appears with a photograph and Alice must make a choice. Will she spend the rest of her life consumed by dreams of the past, or can she admit her mistakes and choose love and light at last?

A stunning and heartbreaking novel about how a forbidden love can echo through the generations. Readers who love Lucinda Riley, Kathryn Hughes and The Storyteller’s Secret will be captivated. 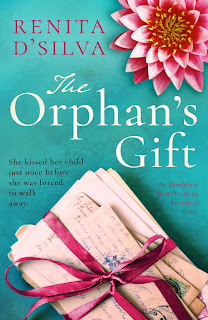 The Orphan's Gift is a wonderful saga that explores a mother's love and how lives were affected by war. This emotional story also explores lasting effects of how the division of race affected more than one life.

Alice and Janaki have tragic stories at different times in history, but their lives eventually converged. The story starts with Alice in India 1909. While Alice did not want for much in a material sense as her father was in the British Royal Army and she had her mother, her life was not ideal. This was in large part due to the fact that her mother spent most of her life in bed, Alice was raised by her nanny, Ayah, and she formed a great bond with Ayah's son Raju. As children they were blind to the incredible race divisions that would plague them as they grew up.

The story begins to go back and forth between Alice's life and that of Janaki, with Janaki’s story in 1944 with her being raised in an orphanage. Janaki did manage to get adopted by loving parents, but things did not stay in her favor, as she was forced to deal with terrible tragedies.

With the story being told in alternating points of view and time spans between both Alice and Janaki, there were many tragedies and thus was often heartbreaking. There was terrible hatred at that time and this eventually destroyed the incredible bond Alice had with Raju. Later, when Janaki was born she was taken to an orphanage by her mother. It takes decades of tragedies before a glimmer of hope is offered to either Alice or Janaki.

It was disconcerting to read of the violence and hatred that existed during those years towards the Hindus and this broke my heart. The rapid switch between stories gave me a chance to breathe through my tears, but I could not put the book down because I so hoped for some type of happiness to occur for both Alice and Janaki. I was very pleased to have followed this story until the end and was rewarded with a heartwarming conclusion.

Renita D'Silva loves stories, both reading and creating them. Her short stories have been published in 'The View from Here', 'Bartleby Snopes', 'this zine', 'Platinum Page', 'Paragraph Planet' among others and have been nominated for the 'Pushcart' prize and the 'Best of the Net' anthology. She is the author of 'Monsoon Memories','The Forgotten Daughter', 'The Stolen Girl', 'A Sister's Promise', 'A Mother's Secret', 'A Daughter's Courage', 'Beneath An Indian Sky', 'The Girl In The Painting', 'The Orphan's Gift'.