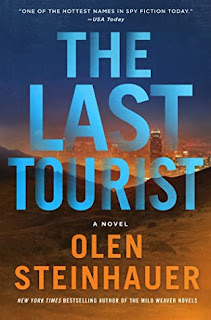 A decade later, Milo is hiding out in Western Sahara when a young CIA analyst arrives to question him about a series of suspicious deaths and terrorist chatter linked to him.

Their conversation is soon interrupted by a new breed of Tourists intent on killing them both, forcing them to run.

As he tells his story, Milo is joined by colleagues and enemies from his long history in the world of intelligence, and the young analyst wonders what to believe. He wonders, too, if he’ll survive this interview.


After three standalone novels, Olen Steinhauer returns to the series that made him a bestseller.

I have enjoyed every book in this Milo Weaver story and this book was a find end to an intriguing series. The book opens in first person from the perspective of a CIA analyst. His life will forever be changed when he is assigned the task of checking out someone named Milo Weaver. Anyone having read this series will know that Milo was a part of a secret group of CIA operatives called The Library, and has managed to spend ten years off the radar.

This operation spans the globe and brings in a bevy of dangerous characters, situations and experiences. It is almost too much to absorb as their are many players and locations and keeping them all straight while reading this book should have earned me a degree of some sort.

Since spy novels are not my forte, this was a complicated, comprehensive read that took a lot for me to absorb. Having read the first three books in the series, The Tourist, The Nearest Exit and An American Spy, helped me to fit into Milo's world and all of the danger it entailed.

If you like deeper stories filled with intrigue that take you to the edge of your imagination, then I encourage you to pick up this book, The Last Tourist, and the entire series.

Many thanks to Minotaur and to NetGalley for this ARC for review. This is my honest opinion.

Olen Steinhauer grew up in Virginia, and has lived throughout the US and Europe. He spent a year in Romania on a Fulbright grant, an experience that helped inspire his first five books. He now splits his time between Hungary and New York with his wife and daughter.

His first novel, The Bridge of Sighs (2003), began a five-book sequence chronicling Cold War Eastern Europe, one book per decade. It was nominated for five awards. The rest of the sequence includes: The Confession, 36 Yalta Boulevard (The Vienna Assignment in the UK), Liberation Movements (The Istanbul Variations in the UK)—this one was nominated for an Edgar Award for best novel of the year—and Victory Square, which was a New York Times editor’s choice.

With The Tourist (2009), he began a trilogy of spy tales focused on international deception in the post 9/11 world. The Tourist reached the New York Times bestseller list, and has been translated into 25 languages. The second volume, The Nearest Exit, was published in 2010 and won the Hammett Prize for best literary crime novel of the year. The finale, An American Spy, was published in March 2012 in the US and UK, and it spent 3 weeks on the New York Times bestseller list, as well as the LA Times and Publishers Weekly bestseller lists.

The Cairo Affair (2014), which begins in Budapest and moves to post-Mubarak Cairo and Libya in the midst of the Arab Spring, was published to acclaim from The New York Times, The Seattle Times, Amazon.com, The Saturday Evening Post, The Christian Science Monitor, PopSugar, and others. It reached a number of bestseller lists, including the New York Times, the Washington Post, and Publishers Weekly.

All the Old Knives (2015), deals with terrorism, love and revenge, split between a restaurant in California and the American embassy in Vienna. He penned the screenplay, which is being produced by Chockstone Pictures and Nick Wechsler Productions, and will star Chris Pine. He spent nearly a year in Berlin making a television show, Berlin Station, which ran for three seasons on Epix.

Turning to the threat of domestic terrorism, The Middleman (2018) focuses on the political anxieties and frustrations of contemporary America.

Forthcoming in March 2020, The Last Tourist will return to the world of Milo Weaver, jumping a decade past the events in An American Spy and bringing Milo’s story fully into the present.