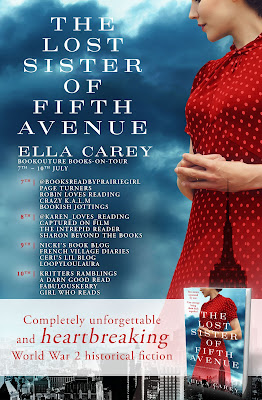 New York, 1938: Martha pulled the door of her Fifth Avenue apartment closed, her heart thumping, re-reading the telegram she’d been dreading. Her beloved sister Charlotte needed her help. She was alone in Paris, and the threat of Nazi invasion was growing ever stronger. The time had come for Martha to make the bravest decision of her life. She needed to bring Charlotte home.As Martha looks out of her bedroom window at the blossom-covered trees in Central Park, she is a world away from Europe and the threat of war. But when a telegram arrives from her sister Charlotte telling of the death of their Jewish friend Anita, Martha’s quiet life changes in an instant. With the threat of the Nazi invasion growing, Martha knows she must travel to Paris to convince Charlotte to return home.When Martha arrives, she finds a city preparing for war. Soldiers patrol Paris’ cobbled streets and families talk of packing up and fleeing with whatever they can carry. Clutching her sister tightly, Martha knows that Charlotte has already decided to stay. Charlotte’s heart is in France, and as an American in Paris she believes she will be safe.When the Nazis march through Paris’ streets and raise their flags over the city’s most beautiful buildings, Charlotte is determined not to give in. She works for the Resistance with a Frenchman named Louis, carrying messages, and hiding Anita’s family’s precious art collection from the Nazis. Meanwhile, Martha vows to help a female Jewish professor to safety in America, only to be faced with impossible odds.But as the war rages, Martha and Charlotte’s determination will be tested like never before. And when Charlotte uncovers a shocking secret about her family which threatens her own life, can she find the strength to protect those she loves the most?From top ten bestselling author Ella Carey comes an utterly heartbreaking novel about the strength of sisterly love and the courage of the women of the Resistance. Perfect for fans of The Nightingale, All The Light We Cannot See and Fiona Valpy.
BUY LINKS:
Amazon: https://geni.us/B09XJ7N5QDsocial 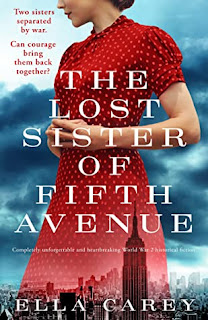 Title:   The Lost Sister of Fifth Avenue
Author:  Ella Carey
Series:  Daughters of New York #4
Publisher:  Bookouture
Genre:   Historical Fiction
Format:  Kindle ARC
No. of Pages:   327
Date of Publication:   July 7, 2022
My Rating:  5 Stars
Twin sisters live thousands of miles apart. Martha was living a good life on Fifth Avenue in New York. However, that means nothing to her when she learns that her twin sister Charlotte needs her help. Charlotte is currently living in Paris and the Nazi invasion is getting closer and closer. Martha is currently residing with her father in New York whereas Charlotte was living near a dear family friend who has since passed away. Martha does what she has to do to bring her sister home.
How will Charlotte feel about leaving Paris? With imminent danger as a definite factor if she were to go with Martha, time is of the essence. Martha would make the decision for Charlotte if it were up to her. As things start to evolve, it soon becomes clear that the sisters were not just separated by an ocean, they were seperated by ideals and goals.
Courage and strength go hand-in-hand in this fourth book of the Daughters of New York series. The previous titles, A New York Secret, The Lost Girl of Berlin and The Girl From Paris, were all incredible reads and this installment is just as impactful. This book, like the others, has multiple viewpoints, and these increase the intensity of this pivotal book. In fact, characters from the previous books are briefly mentioned, like Vianne Mercer, from book three. Vianne was said to be a family friend. If you are anything like me and like the continuity that comes from reading series, then this will make your heart sing.
To say those days of World War II were dark days would be a gross understatement. While at the time America was not as affected as Paris was with the invasion getting closer and closer, it was important to see how Martha chose to leave relative safety to try and save Charlotte. Considering also that this book had a dual timeline brought this book even more meaning. Then factor in the sensitive, beautiful way that Ella Carey has with words and her storytelling, and The Lost Sister of Fifth Avenue becomes a book that will be with me for a long time to come.
I would like to also mention something that Ms. Carey does in this book. She provides two epilogues. In fact, when reading, this caught me by surprise. By so doing, the reader is kept in mind the important roles Martha and Charlotte played, as well as how heartbreaking their experiences were. However, strength, hope and courage shone through time and again in this stunning read.
I want you to read this book so much that I will mention in this review that this title, as well as the previous three books in this series, is available on Kindle Unlimited! Yes, if you have a KU subscription, you can get this entire series at no additional cost. So, start with book one, and read each title. You will not be disappointed. I love the fact that there are two more books upcoming in this series.
Many thanks to Bookouture and to NetGalley for this ARC for review. This is my honest opinion.
Please enjoy my YouTube video review -

Ella Carey is the international bestselling author of The Things We Don’t Say, Secret Shores, From a Paris Balcony, The House by the Lake, and Paris Time Capsule. Her books have been published in over fourteen languages, in twelve countries, and have been shortlisted for ARRA awards. A Francophile who has long been fascinated by secret histories set in Europe’s entrancing past, Ella has degrees in music, nineteenth-century women’s fiction, and modern European history. She lives in Melbourne with her two children and two Italian greyhounds who are constantly mistaken for whippets.
Ella loves to connect with her readers regularly through her facebook page and on her website.
http://www.ellacarey.com/
https://www.facebook.com/ellacareyauthor/
https://www.instagram.com/ellacarey_author/
https://twitter.com/Ella_Carey
Sign up to be the first to hear about new releases from Ella Carey here: https://www.bookouture.com/ella-carey