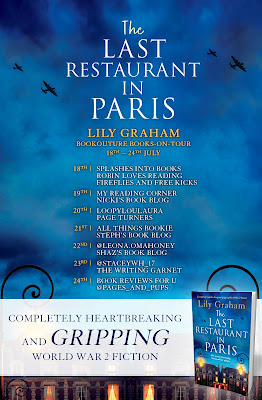 DESCRIPTION:
Paris 1944. To save her people, she served the enemy.
In enemy-occupied Paris, as the locals go to bed starving and defeated by the war, music and laughter spills through the door of a little restaurant, crowded with German soldiers. The owner Marianne moves on weary feet between its packed tables, carrying plates of steaming, wholesome food for the enemy officers. Her smile is bright and sparkling, her welcome cordial. Nobody would guess the hatred she hides in her heart.
That night, the restaurant closes its doors for the final time. In the morning, the windows are scratched with the words ‘traitor and murderer’. And Marianne has disappeared without a trace…
Years later, Marianne’s granddaughter Sabine stands under the faded green awning, a heavy brass key in her hand, staring at the restaurant left to her by the grandmother she never met. Sabine has so many questions about herself. Perhaps here she can find answers, but she knows she isn’t welcome. Marianne was hated by the locals and when Sabine discovers they blamed her for the terrible tragedy that haunts the pretty restaurant, she is ready to abandon her dark legacy.
But when she finds a passport in a hidden compartment in the water-stained walls, with a picture of a woman who looks like her grandmother but has a different name, she knows there must be more to Marianne’s story. As she digs into the past, she starts to wonder: was her grandmother a heroine, not a traitor? What happened to her after the tragic night when she fled from her restaurant? And will the answer change her own life forever?
A haunting and compelling story of love, strength, and sacrifice in Nazi-occupied Paris as one brave young woman risks everything to save the lives of those around her. Fans of The Nightingale, The Paris Library and The Alice Network will lose their hearts to The Last Restaurant in Paris.
BUY LINKS:
https://geni.us/B09XR387ZFcover
Audible:
UK: http://ow.ly/oz1z50JRgm0
US: http://ow.ly/ILTv50JRglX
Listen here: http://ow.ly/n8Bi50JRglY
MY THOUGHTS: 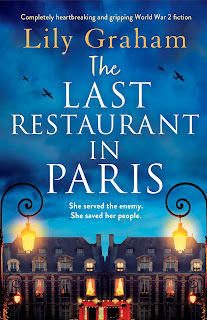 Title:   The Last Restaurant in Paris
Author:  Lily Graham
Publisher:  Bookouture
Genre:   Historical Fiction
Format:  Kindle ARC
No. of Pages:   333
Date of Publication:   July 18, 2022
My Rating:   5 Stars
In the year 1987, Sabine Duchelle discovered that her mother was adopted. This was only the tip of the iceberg for Sabine. Armed with an old key and determination, she heads to Paris for answers.
Enemy occupied Paris, 1940s. Marianne Blanchet is determined to open a small restaurant, knowing full well that most, if not all of her customers will be enemy officers. Her customers will likely be the hated Germans who have infiltrated the country. However, Marianne is not about to be deterred and does what she can to obtain any permissions that she can and does indeed open her restaurant.
However, the restaurant was only open for so long. In fact, Marianne's story ended on a very dark note. After the restaurant was closed, words were scratched on the windows - traitor and murderer. Why did the restaurant close so suddenly, and what was the meaning behind those words?
These are questions that Sabine has decades later. She goes to Paris with her key and has many questions about her grandmother Marianne. There was a legacy left by Marianne and this is something the locals have not forgotten - or forgiven - all those years later. Sabine meets an old man named Gilbert. Gilbert was around during the time the restaurant was opened, and his story is chilling and sad.
What an incredibly tragic story! Marianne had a plan, that much is made clear. However, it took a turn that was not expected. Sabine wants answers. Whether or not she can handle the truth behind those answers remains to be seen. Something happened in 1943 and Sabine's determination for the truth will not be swayed. In this compelling read by Lily Graham, readers will slowly learn the motive behind Marianne's actions and why it was that Sabine's mother was adopted.
Both timelines were intriguing, especially considering the irreversible actions that Marianne took in 1943. She took great risks and those risks came with tragic results. A morally sensitive story to be sure, one that any lover of historical fiction should read. This was a book that was impossible to put down, especially when the mystery and motive behind Marianne's actions are explored and how Sabine and Gilbert slowly uncovered the secrets of the past in order to understand what happened back in 1943.
The story paints Marianne one way or another - evil or kind. Sabine wants to understand how to view her. Was Marianne a heroine or was she truly a traitor, a murderer, something believed for decades? This dark story answers those questions while smartly delivering a message of strength, hope and courage.
Many thanks to Bookouture and to NetGalley for this ARC for review. This is my honest opinion. 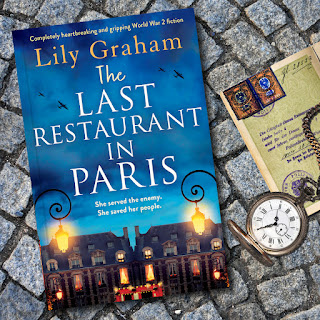 Lily Graham is the author of the bestselling, The Child of Auschwitz, The Paris Secret and The Island Villa, among others. Her books have been translated into numerous languages, including French, Italian, Polish, Portuguese and Turkish.
She grew up in South Africa, and was a journalist for a decade before giving it up to write fiction full time. Her first three novels were lighter, women's fiction, but when she wrote The Island Villa, a story about a secret Jewish community living on the tiny island of Formentera during the Spanish Inquisition, she switched to historical fiction and hasn't quite looked back since.
She lives now in the Suffolk coast with her husband and English bulldog, Fudge. Her latest book, The Flight of Swallows, set in Denmark and Sweden, will be out in January 2021.
Social Media
Facebook: https://facebook.com/LilyRoseGrahamAuthor/
Twitter: https://twitter.com/lilygrahambooks
Website: https://lilygraham.net/
Instagram: https://www.instagram.com/lilygrahamauthor/
Bookouture Email Sign Up: https://www.bookouture.com/lily-graham