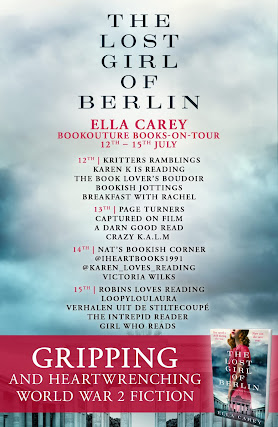 In today's blog tour post, I also include the first book in the Daughters of New York series, A New York Secret. 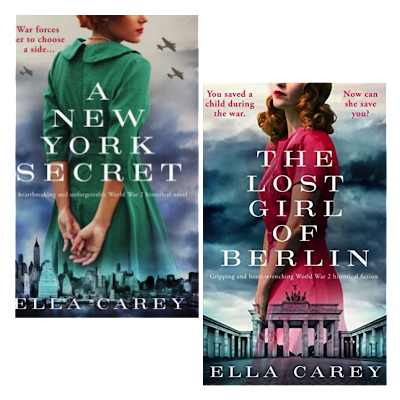 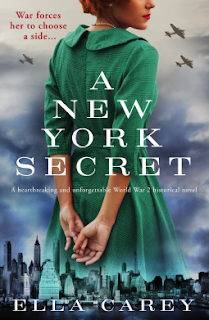 Title:   A New York Secret
Author:  Ella Carey
Publisher:  Bookouture
Genre:   Historical Fiction
Format:  Kindle
No. of Pages:   379
Date of Publication:   March 12, 2021
My Rating:   5 Stars
DESCRIPTION:
From top-ten bestseller Ella Carey comes a stunning Second World War novel. The glitter, glamor and danger of 1940s New York collide in this dazzling story about a young woman striving to survive in a world where everything is set against her.
War forces her to choose a side…
1942, New York. As war rages in Europe, Lily Rose is grateful for her perfect life: a wealthy family who love her and a dream job working uptown as a restaurant chef. Times are changing for women and Lily is determined to run her own kitchen one day. She hopes handsome Tom Morelli, son of Sicilian immigrants, will be at her side. Together they work late, dreaming up delicious meals for New Yorkers struggling with wartime rationing and the threat of sons and sweethearts being called up…
Then Tom receives a devastating telegram that changes everything: he is drafted to fight in Italy.
Suddenly alone, Lily turns to her parents for support. But when her mother finds out about Tom, she is furious. When the war ends, Lily’s duty is to marry the man picked for her, keep house and raise children. They give her a heartbreaking ultimatum: end her relationship with Tom or lose her family and inheritance forever.
In the middle of the war, Lily is left in an impossible position. Will she choose to stay with her family and live the safe life she has always known, or will she follow her heart and her dreams?
An emotional and utterly unputdownable novel, inspired by true events, about the courage, love and friendships that will see you through war and tragedy. Fans of Fiona Davis, Rhys Bowen and The Nightingale will be captivated.
Link to purchase the book
MY THOUGHTS:
Lily Rose has eschewed convention and the wishes of her parents - particularly her mother - to find a husband and to marry well. Instead, Lily is a talented chef with every intention of growing her career. The world is in the throes of World War II and New York, though mostly unaffected, is feeling the effects. For one thing, more and more men are being drafted, thus opening up jobs for women that might not otherwise be available to them.
Lily's mother is hoping her daughter will soon tire of working so hard. While Lily is completely happy her mother has other ideas. Meanwhile, Lily finds herself attracted to another chef at the restaurant where she works, and his name is Tom Morelli, a Sicilian immigrant. Will Lily allow her growing affection for Tom to change her direction in life, especially when another man has been declaring his feelings for her? Tom is not well off, so Lily knows the reaction her parents would have should she follow her heart. What is more is that Tom is about to go off to war. Will he make it back safely and will he and Lily have their chance at happiness?
Thus far just about every historical fiction book I have read takes place in Europe and other countries, showing the utter devastation that surround the effects of World War II. With this book we have affluence and class distinction that are at the base of this story. I loved reading things from this angle during the war, especially when it is hard to imagine affluent restaurants and other businesses surviving at that time despite food shortages and other restrictions that were going on.
Lily is a remarkable woman of strength and I loved seeing such a strong female character that thrived in the male-dominated world at that time. I also loved how she handled her difficult mother and followed her heart, despite the heartbreak she felt at times. Allthough A New York Secret is not a review title, since I have The Lost Girl of Berlin for an upcoming blog tour, I just had to read this book.
**Featured Blog Tour review** 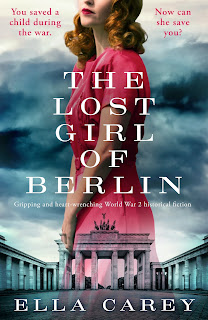 Title:   The Lost Girl of Berlin
Author:  Ella Carey
Publisher:  Bookouture
Genre:   Historical Fiction
Format:  Kindle ARC
No. of Pages:   289
Date of Publication:   July 12, 2021
My Rating:   5 Stars
DESCRIPTION:
The truck stopped for a moment in the freezing, bombed-out street and Kate caught sight of a little girl in a ragged dress on the steps of a once-beautiful mansion. The child’s eyes were startling blue, a pair of endless pools, drawing Kate towards her…
1946, Berlin. War correspondent Kate Mancini is in Germany, reporting on the aftermath of the devastating war. For her readers back home in New York, she tells the stories of innocent families, trying to rebuild the wreckage of their lives now the soldiers have left at last. But in the Russian-held sector of Berlin on an icy winter’s day, Kate breaks all the rules, rescuing Mia Stein, a silent orphan who she fears will otherwise perish.
Together with her fellow journalist, handsome Rick Shearer, Kate manages to find a safe house for Mia before she returns to America and vows to keep in touch. Back home, the reality of post-war life for women is stark. Whilst Rick walks into his dream job, no newspaper will hire a woman. The editors laugh her out of their offices, telling her to get married and raise a family. Rick does all he can to support her, as she takes her first steps towards the new medium of television news, and their friendship deepens into something more.
Then tragedy strikes: Rick is falsely named as a communist sympathizer. He is arrested, blacklisted and faces prison.
Kate knows she must do all she can to free the man she loves. But that means returning to Germany, to seek out the little orphan girl who is her only chance at salvation. Kate and Rick saved Mia—will she help them both now? And even if Kate succeeds, freedom might never be hers when she returns home…
From Amazon Charts bestseller Ella Carey comes an utterly heartbreaking historical novel, inspired by true events, about the courage, love and friendships that sustain us in the darkest of days. Fans of Fiona Davis, All the Light We Cannot See and My Name is Eva will be totally captivated.
Buy Link:
Amazon: https://bit.ly/3dK8lEK
MY THOUGHTS
Kate Mancini is a journalist in a male-dominated world. More than that, class distinction and the woman's role disrupts any chance Kate hss for love. World War II is over and she had been reporting on the war in Berlin. Now that she is back home in New York, Kate finds herself struggling to get a radio job. However, no such job that highlights her skill in writing is available to her. One of the last things Kate and fellow war corrrespondent Rick Shearer were able to do in Berlin was to resuce a lost orphan girl, who they later discovered is named Mia Stein. They managed to find the child a safe house, although it broke both of their hearts to let her go.
Meanwhile, it is clear that Kate and Rick are attracted to one another. However, due to the rules of convention they are all but competitors in their field. What is more is Kate is more than aware that if she is tied to any man that it could have a devastating impact on her career. While it certainly was not fair, men got the jobs, women got turned away, no matter their experience and talent.
Kate and Rick find themselves traveling yet again, and this leads to a false accusation against Rick that could land him in prison. What can Kate do to save Rick, all while not upsetting her chances at finding employment? What is more, what of the little girl they were forced to leave behind?
I wasn't sure how a World War II based historical fiction would work as part of a series, but the first book, A New York Secret, had the main character, Lily Rose, as a woman struggling in her career during the war and in this story, The Lost Girl of Berlin, the war is now over and we have another strong woman fighting her way in a world barely recovering from the war. I loved the continuity in this second book in the series and the appearances of some of the minor characters gave a warm sense of familiarity.
Not only does male dominance stand out in this book with regard to employment issues, class distinction was something that was difficult to read about. This affected Kate, but also her sister and the views of her mother. Also, Mia's story was utterly heartbreaking to read. So this multi-layered book was equally emotional and impessive. This was a wonderful story that has me more than eager to read the third book in the trilogy.
Many thanks to Bookouture and to NetGalley for this ARC for review. This is my honest opinion.
ABOUT THE AUTHOR:

Ella Carey is the international bestselling author of The Things We Don’t Say, Secret Shores, From a Paris Balcony, The House by the Lake, and Paris Time Capsule. Her books have been published in over fourteen languages, in twelve countries, and have been shortlisted for ARRA awards. A Francophile who has long been fascinated by secret histories set in Europe’s entrancing past, Ella has degrees in music, nineteenth-century women’s fiction, and modern European history. She lives in Melbourne with her two children and two Italian greyhounds who are constantly mistaken for whippets.
Ella loves to connect with her readers regularly through her facebook page and on her website.
http://www.ellacarey.com/
https://www.facebook.com/ellacareyauthor/
https://twitter.com/Ella_Carey