BLOG TOUR - Do I Really Know You? 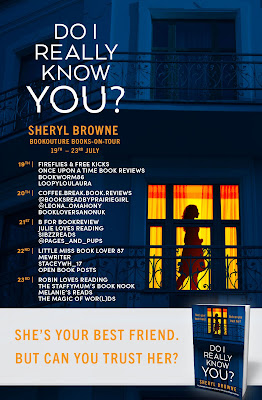 DESCRIPTION:
She’s the friend you trust with your life. But can she trust you with hers?When the police knock on my door to tell me that my best friend Kiara has taken her life, my world shatters.Ever since we met at university along with my husband, Nathan and her ex-husband David, the four of us have been inseparable. I can’t believe that, suddenly, she’s not here.The police say that Kiara fell from the balcony of her small, pristine apartment. But I refuse to accept that she jumped.I thought I knew Kiara better than anyone. But I soon find out my friend was keeping some big secrets.Talking to her ex-husband, David, I’m shocked. Was she reallyhaving an affair, like he claims?Searching for evidence, I let myself into her apartment. My heart races as I find her diary and I read the name of her last appointment – Nathan. Why would she be meeting with my husband? And why didn’t he tell me?It soon becomes clear that everyone around me has been hiding the truth, and when the police call again and ask me to look at security camera footage from the night Kiara died, fear floods through me as I recognise her final visitor. Can I trust anyone in my life? And if someone did push Kiara that night, could I be next?Perfect for fans of The Girl on the Train, Gone Girl and The Wife, Do I Really Know You? is a gripping new psychological thriller from bestselling author Sheryl Browne. Once you start reading, you won’t be able to stop!
BUY LINKS:
Amazon: https://geni.us/B0B1QRWNNXsocial
Apple: http://ow.ly/P2je50JU0VJ Kobo: http://ow.ly/QSq750JU0VI Google: http://ow.ly/strr50JU0VH
Audio:
UK: http://ow.ly/ppbo50JUyaA US: http://ow.ly/tzYX50JUyaz
Listen to a sample here:
https://soundcloud.com/bookouture/do-i-really-know-you-by-danielle-owen-jones-narrat 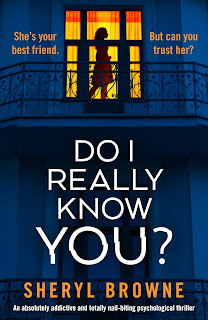 Title:   Do I Really Know You?
Author:  Sheryl Browne
Publisher:  Bookouture
Genre:   Psychological Thriller
Format:  Kindle ARC
No. of Pages:   370
Date of Publication:   July 19, 2022
My Rating:   5 Stars
While Maddie and Kiara had been very close friends for years, they had a falling out and their relationship suffered. However, when Maddie is informed by the police that Kiara has died, apparently due to suicide, Maddie just had to know what would drive Kiara to take such action.
Kiara was married to David and she really wasn't happy. In fact, when Kiara died, she and David were separated. Even before she separated from David, Kiara wasn't happy. She insisted that they move because she kept on finding spiders in their cottage. Being a real arachnophobe, it got to be too much for her. Was her home really infested by spiders or was there gaslighting going on? If she was indeed being gaslighted by David, why would she kill herself after they had separated?
Meanwhile Maddie is married to Nathan and things between them become strained. Then there are Jake and Sophie. Jake was Kiara's previous boyfriend before she married David and Jake married Sophie. A lot of players in this intriguing book by Sheryl Browne. Not only are there are bevy of characters, but the term unreliable narrators comes to mind, especially when the cause of Kiara's death might not have been as it was ruled.
Now, if someone is afraid of spiders, then this might not be the book to read. They play a huge role in this book - in fact, Nathan's job as an entomologist comes into play in this thrilling read. How devious of Sheryl Browne! Everything and everyone comes full circle in this book. While it was Kiara who lost her life, readers may begin to wonder if there is more than one victim.
Then there is the fact that while Kiara had her fear of spiders, Maddie had her addiction to sleeping pills. Both women were interesting protagonists in this story. Maddie's actions, mainly due to insomnia and said sleeping pills, really jazzed up this intriguing story. Then, let's talk about David. What a character! Nathan keeps going to South America for his research work. David sticks around. Perhaps too close?
What a sensationally well-layered story! While the crux of the matter might be the apparent suicide of Kiara, there are so many additional layers that come into play through the pages of this book. How well this is done. Yes, the various characters, fears, addictions, actions and more all come together for a compelling read that will catch even the most seasoned reader by surprise.
Many thanks to Bookouture and to NetGalley for this ARC for review. This is my honest opinion.
Please enjoy my YouTube video review -
ABOUT THE AUTHOR:

Bestselling Author, Sheryl Browne, writes taut, twisty psychological thriller. A member of the Crime Writers’ Association and the Romantic Novelists’ Association, Sheryl has several books published and two short stories in Birmingham City University anthologies where she completed her MA in Creative Writing. Sheryl has also obtained a Certificate of Achievement in Forensic Science and – according to readers – she makes an excellent psychopath. Sheryl’s latest psychological thriller DO I REALLY KNOW YOU? comes to you from BOOKOUTURE. Her previous works include the DI Matthew Adams Crime Thriller series, along with contemporary fiction novels, The Rest of My Life and Learning to Love.To find out more about Sheryl. go to www.sherylbrowne.com
https://twitter.com/sherylbrowne
https://www.instagram.com/sheryl.browne
Sign up to be the first to hear about new releases from Sheryl Browne here: https://www.bookouture.com/sheryl-browne