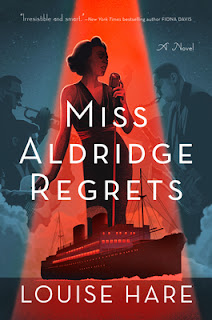 London, 1936. Lena Aldridge wonders if life has passed her by. The dazzling theatre career she hoped for hasn't worked out. Instead, she's stuck singing in a sticky-floored basement club in Soho, and her married lover has just left her. But Lena has always had a complicated life, one shrouded in mystery as a mixed-race girl passing for white in a city unforgiving of her true racial heritage.

She's feeling utterly hopeless until a stranger offers her the chance of a lifetime: a starring role on Broadway and a first-class ticket on the Queen Mary bound for New York. After a murder at the club, the timing couldn't be better, and Lena jumps at the chance to escape England. But death follows her onboard when an obscenely wealthy family draws her into their fold just as one among them is killed in a chillingly familiar way. As Lena navigates the Abernathy's increasingly bizarre family dynamic, she realizes that her greatest performance won't be for an audience, but for her life.

With seductive glamor, simmering family drama, and dizzying twists, Louise Hare makes her beguiling US debut.
Link to purchase the book
MY THOUGHTS:
Lena Aldridge is a woman with ambition. However, being of mixed race back in the 1930s limit her opportunities. Her career in London comes to a screeching halt when her boss, the husband of her best friend, is poisoned while in the audience.  Lena may indeed be a suspect, but she does have a chance to get away because she gets offered an opportunity to appear in a show on Broadway.  Lena takes a first class ticket ride on the Queen Mary that might open many doors of opportunity for her.
However, things do not go as planned. In fact, there is a murder on the ship. More than that, someone is not happy with Lena‘s presence and various scenarios occur that make her life very difficult and it is questionable whether she will even make it to Broadway. The transatlantic cruise is not one of pleasure, even though Lena has a first class ticket. Instead, she is often accosted, accused, and judged by her race and sex. While on the ship,Lena gets the opportunity to learn more about her past and the book shows how she was sometimes able to pass as white and how she played on either side of race depending on how it would benefit her.
In addition to the problems that Lena is having on the ship, yet another murder occurs. Considering that this book is written in first person narrative, as well as by means of a diary, we just are given privy to Lena‘s thoughts and concerns while she is on this trip. Is Lena guilty of these murders or is her situation one that makes her a likely suspect? She’s definitely not an innocent woman because she had been sleeping with a married man. Does this mean that she is a woman that does not have a good character or does this mean that she is a woman who dealt with living a double life and took whatever she could to get by? The dynamics in this book take on quite a few different directions, which include morality, alcohol and drugs, racism, class distinction, the unfairness that some women face and much more.
Considering that this book is not just a historical fiction but a historical mystery, it is definitely a well-layered book that has a lot of intrigue as well as drama. In fact, this book reminded me of Agatha Christie’s book Death on the Nile as the second murder happened while they were on the ocean so it was more than clear that the murderer was on board. That definitely increased the tension and danger in this well-written and captivating read.
Many thanks to Berkley Books and to NetGalley for this ARC for review. This is my honest opinion.
ABOUT THE AUTHOR:

Louise Hare is a London-based writer and has an MA in Creative Writing from Birkbeck, University of London. Originally from Warrington, the capital is the inspiration for much of her work, including This Lovely City, which began life after a trip into the deep level shelter below Clapham Common.
web | twitter