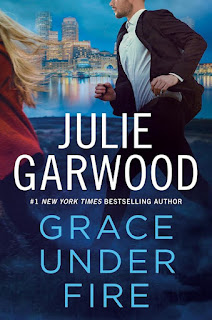 A Navy SEAL will need every bit of his extensive skill set when he appoints himself as bodyguard to a woman determined not to need one in this thrilling new novel from #1 New York Times bestselling author Julie Garwood.
Grace Isabel MacKenna had a hundred things to do today. Killing someone wasn’t one of them. It was supposed to be a quick visit to Boston for the Buchanan anniversary party, then on to Scotland to collect an inheritance. She checks into the hotel and then decides to go for a brisk walk. But after getting lost she ends up with a wounded man stumbling into her arms, and then his shooter coming after them both. When she fires back in self-defense, she doesn’t expect him to drop dead. Thanks to the Buchanans dispatching Navy SEAL and now a lawyer Michael Buchanan to help her deal with the police, Isabel endures hours of interrogation and is finally free to go.
Isabel knows she should be grateful for Michael’s help, but since she’s harbored an extreme dislike for him for years, gratitude is difficult to muster. Michael has appointed himself her de facto guardian, and she’s stuck with him despite their constant bickering and sizzling attraction. Even when Isabel goes to Scotland to claim her inheritance, Michael follows her, but he isn’t the only thing she can’t shake. Mysterious threats against Isabel surface, and before they can deal with their growing feelings for each other, Michael and Isabel must first survive.
Link to purchase the book
MY THOUGHTS:
Killing a man is something that Grace Isabel MacKenna will never forget. She knows the unavoidable act will keep her up for many nights to come. Her trip to Boston was supposed to be short-lived, and her next travels will be to take her to Scotland. She has received an inheritance but must go to Scotland in person in order to claim it.
Her plans change considerably when a man falls into her arms while being chased by a shooter. Whether in survival mode or acting on instinct she is able to grab a flailing gun and manages to shoot the attacker between the eyes. She killed a man. Not how she expected her day to go. Not at all.
Quite naturally she must be questioned by the police, but she doesn't have to face this alone. Michael Buchanan, Navy SEAL and lawyer, not only accompanies her but soon acts as her protector.  There is a catch. Isabel has been harboring a great dislike for him. Isabel's connection to Michael is that her sister Kate recently married his brother. In fact, Michael and Isabel met at that wedding and clashed almost from the moment they met. This dislike proves contrary to the strong physical attraction that she has for Michael, especially considering the fact that he is equally drawn to her.
Danger follows Isabel's every move, and as far as Michael is concerned, he will keep her safe. Meanwhile, even before Isabel can board a plane to Scotland, she gets the opportunity to exhibit her song-writing talent and singing by performing with a huge star. What is not clear to Isabel is that shooting from earlier has placed her in the line of fire, and her sudden stardom easily keeps her in the killer's crosshairs.
What a delightful read! Although this book is very deep into a long series, I was able to read and enjoy it as a standalone novel. However, I immediately fell in love the Buchanan family and can easily see myself devouring this series from the beginning, and following the series as future books are released.
Julie Garwood writes with flair. Not only does this book keep the reader's attention with the drama, action, danger, romantic elements and mystery, Ms. Garwood has a sense of humor that shines through the pages of this story. There were more than a few times that I found myself chuckling at the way things were worded.
Excellent pacing, two excellent protagonists, a strong supporting set of characters, really worked remarkably well to create a fabulous story from beginning to end. This might have been the first book that I have read by Julie Garwood, but it certainly won't be my last.
Many thanks to Berkley and to NetGalley for this ARC for review. This is my honest opinion.
Please enjoy the following excerpt:
Please also enjoy my YouTube video review -
ABOUT THE AUTHOR:

It’s no surprise that Julie Garwood became a writer. Growing up in a large family of Irish heritage, she took to storytelling naturally. “The Irish relish getting all the details of every situation,” she explains. “Add in the fact that I was the sixth of seven children. Early in life I learned that self-expression had to be forceful, imaginative, and quick.”
Creating stories was always a passion for Julie, but she didn’t focus on making it a career until the youngest of her three children entered school. After the publications of two young adult books, she turned her interests to historical fiction. Her first novel, GENTLE WARRIOR, was published in 1985, and there has been a steady parade of bestsellers ever since. Today more than 40-million copies of her books are in print, and they are translated in dozens of languages around the world. One of her most popular novels, FOR THE ROSES, was adapted for a HALLMARK HALL OF FAME production on CBS.
Whether the setting be medieval Scotland, Regency England, frontier Montana, or modern-day Louisiana, her themes are consistent: family, loyalty, and honor. Readers claim that it’s the humor as well as poignancy of her novels that keep them coming back for more. Julie described her goals this way: “I want my readers to laugh and cry and fall in love. Basically, I want them to escape into another world for a little while and afterwards to feel as though they’ve been on a great adventure.”
Julie lives in Leawood, Kansas, and is currently working on her next novel.
web | twitter