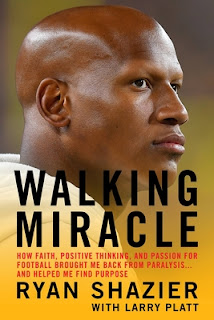 As an All-American at Ohio State and All-Pro linebacker for the Pittsburgh Steelers, Ryan Shazier was living his best life while excelling at the game he loves, a game that has given him so much. But then Ryan was forced to redefine success. Suddenly, it was no longer measured by tackles or sacks, but by purpose and faith.

WALKING MIRACLE is the story of this new definition of success, following the arc from December 4, 2017, when Shazier was injured playing the Cincinnati Bengals, to his retirement. For three years, Shazier doggedly pursued a return to professional football. He took small wins as “first downs” on the drive to return to the field: moving his toes, walking, dancing at his wedding, and ultimately running and returning to the team. What Shazier didn’t realize is that along the way, he was preparing himself for another purpose—that of father and husband, philanthropist, and football analyst. The journey was preparing him not for a renewed life as a middle linebacker, but a renewed life after the game.

Here we see Shazier overcome childhood alopecia, which caused a great deal of emotional pain, and scoliosis, which nearly robbed him of his dreams of playing college and professional football. We gain insights into legendary coaches Urban Meyer and Mike Tomlin. And we see him star on the field. Shazier was one of the best defensive players in Steeler history—a history full of great defensive stars.

WALKING MIRACLE—the message on a bracelet given to him by his godmother—is the story of Ryan’s comeback, but it’s also a book of life’s lessons, challenges, and a love letter to the power of positive thinking.

Link to purchase the book
MY THOUGHTS:
All American at Ohio State and All-Pro linebacker for the Pittsburgh Steelers. That may tell readers about his career playing football, but there is much more to this story. A tackle. A sack. Any football player knows that any hit could take them down for good, either crippling them or even causing severe brain degeneration. For Ryan Shazier his injuries were of a physical nature and were devastating. In fact, Ryan was thought to never walk again.
Not only did Ryan defy the odds but doing just that - walking - he wanted to do much more. Ryan wanted to play professional football again. He took as many firsts as possible to try to achieve his dream. Ryan made such progress that he actually remained on the roster for more than one team. However, he never did achieve that particular dream, although he did reach other very high hopes along the way.
The reason it was thought that Ryan would never walk again was because he sustained a critical spinal injury after a head-on tackle. Surgery proved successful in his journey to walk again, but it might not have been enough to achieve his ultimate dream to play professional football once again.
Despite the result of such loss that Ryan had to deal with, this book proved to be a book of hope. Ryan's hope was strongly connected to his faith. In fact, it was is faith that kept Ryan putting one foot in front of another - literally. More than that, this inspiring story relays Ryan's life even before he played the game of football. This was such an incredible story that this book will defnitely get a re-read by me. Faith, hope and courage just might be Ryan Shazier's hallmarks and makes this man a true hero to me.
Many thanks to Grand Central Publishing for this ARC for review. This is my honest opinion.
ABOUT THE AUTHOR: 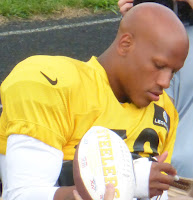 Ryan Shazier
Ryan Dean Shazier is a former American football linebacker. He played college football at Ohio State and was drafted by the Pittsburgh Steelers in the first round of the 2014 NFL Draft.
Shazier had a successful first few seasons in the league, including a Pro Bowl appearance in 2016. During the 2017 season against the Cincinnati Bengals, Shazier attempted to make a head first tackle that left him unable to move his legs, and he had to have spinal stabilization surgery and learn to walk again. After spending two seasons on the Steelers' physically unable to perform list, Shazier announced his retirement from football in 2020.

Larry Platt
A well-known author, editor, media executive and pundit, Larry Platt is the co-author of Just Tell Me I Can’t: How Jamie Moyer Defied the Radar Gun and Defeated Time (“The best book I have ever read on the psychology of that complex and marvelous creature called the pro athlete,” writes Buzz Bissinger) and Everyday I Fight, the posthumous memoir from Stuart Scott.
Platt is a former columnist for the Philadelphia Inquirer and former editor of the Philadelphia Daily News and Philadelphia magazine. Under Platt, the magazine received its first back-to-back nominations for the much-coveted National Magazine Award in General Excellence and was named the nation’s third-best newsstand performer by Capell’s Circulation Report.
Currently, Platt is the co-founder and editor of The Philadelphia Citizen, a nonprofit media organization dedicated to using solutions-based journalism to reignite civic participation.
Platt is a nationally recognized writer, penning multiple features on sports, politics, media and business for publications such as GQ, the New York Times Magazine, New York, Men’s Journal, Playboy, and Salon.com, among other publications.
Platt is the author of four books. In 1999, Avon Books published Keepin’ It Real: A Turbulent Season at the Crossroads with the NBA, a chronicle of a year inside the NBA through the eyes of Charles Barkley, Chris Webber, Jerry Stackhouse, Vernon Maxwell, and Matt Maloney. In May 2002, Temple University Press published New Jack Jocks: Rebels, Race and the American Athlete, an anthology of Platt’s national sports pieces over the years.
In November 2002, Platt penned Only the Strong Survive: The Odyssey of Allen Iverson  (Regan Books). (“Iverson’s past has been strip-mined by many,” writes Sports Illustrated’s Gary Smith. “Platt has gone back with a hand shovel and sifter and found what everyone missed.”)  Most recently, his book about ageless pitcher Jamie Moyer has met with widespread critical acclaim.
Platt, a native Philadelphian and avid tennis player, has appeared on numerous television shows, including Nightline, ESPN Outside the Lines, and HBO Real Sports. Platt is 49 and lives in Ardmore, PA, with his wife, Bet, a second-grade schoolteacher.