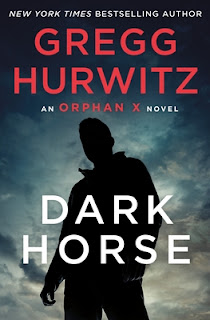 Evan Smoak is a man with many identities and a challenging past. As Orphan X, he was a government assassin for the off-the-books Orphan Program. After he broke with the Program, he adopted a new name and a new mission—The Nowhere Man, helping the most desperate in their times of trouble. Having just survived an attack on his life and the complete devastation of his base of operations, as well as his complicated (and deepening) relationship with his neighbor Mia Hall, Evan isn't interested in taking on a new mission. But one finds him anyway.

Aragon Urrea is a kingpin of a major drug-dealing operation in South Texas. He's also the patron of the local area—supplying employment in legitimate operations, providing help to the helpless, rough justice to the downtrodden, and a future to a people normally with little hope. He's complicated—a not completely good man, who does bad things for often good reasons. However, for all his money and power, he is helpless when one of the most vicious cartels kidnaps his innocent eighteen year old daughter, spiriting her away into the armored complex that is their headquarters in Mexico. With no other way to rescue his daughter, he turns to The Nowhere Man.

Now not only must Evan figure out how to get into the impregnable fortress of a heavily armed, deeply paranoid cartel leader, but he must decide if he should help a very bad man—no matter how just the cause.
Link to purchase the book
MY THOUGHTS:
Evan Smoak had been trained and known as Orphan X for years. Also known as The Nowhere Man. And many other identities. Evan is all things to all people when it comes to saving and protecting as many lives as possible. However, Evan had enough. He left the program, but his desire to help others still remained paramount to him.
A very interesting man, a man with OCD, he will take on any challenge, even if these challenges put his very life at risk, and that is something Evan has experienced time and again, and will likely experience until he takes his very last breath.
Evan faces what just might be his biggest challenge yet - that of actually working with and for the kingpin of a major drug-dealing operation.The fact that Urrea mixes illegal and legal operations does not make him a good man and this goes against everything Evan stands for, but the kingpin, Aragon Urrea nees help and Evan is man for the job. Urrea's eighteen-year-old-daughter has been kidnapped and the location where she is being held can only be penetrated by someone with Evan's experience. In fact, Evan, The Nowhere Man once again, is the only man for the job.
Evan is not alone in this incredible task. In fact, some of the best characters from the previous books in this series - other Orphans - Mia, Joey, Peter and even Dog, the dog, are right in the thick of things. While I really love Evan, Joey, the teenage tech guru is trying hard to steal first place in my heart in this series. This continuity is important. Important enough that this is a series that should really be read in order.
Factor in that I was able to get this book also as an audiobook ARC while having the print ARC was stellar. The narration was just perfect, making Evan come alive and the adventure and danger utterly realistic.
Many thanks to Minotaur Books and to NetGalley for this ARC for review. This is my honest opinion.
Here is a YouTube video review of all of the
previous books in the series:
- - - - -
And here is a picture of all of the previous books in this amazing series: 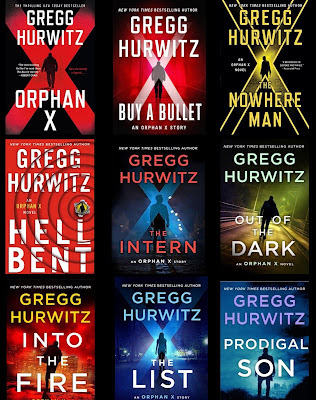 Gregg Hurwitz is the New York Times, #1 internationally bestselling author of 22 thrillers, including the ORPHAN X series, and two award-winning thriller novels for teens. His novels have won numerous literary awards, graced top ten lists, and have been published in 33 languages. Gregg currently serves as the Co-President of International Thriller Writers (ITW).
Gregg has written screenplays for or sold spec scripts to many of the major studios (including THE BOOK OF HENRY), and written, developed, and produced television for various networks. He is also a New York Times bestselling comic book writer, having penned stories for Marvel (Wolverine, Punisher) and DC (Batman, Penguin). He has published numerous academic articles on Shakespeare, taught fiction writing in the USC English Department, and guest lectured for UCLA, and for Harvard in the United States and internationally. In the course of researching his thrillers, he has sneaked onto demolition ranges with Navy SEALs, swum with sharks in the Galápagos, and gone undercover into mind-control cults.
Additionally, Gregg is actively working to end polarization in politics and on college campuses. To that end, he's produced several hundred commercials which got over a hundred million views on digital and TV platforms. His editorial pieces have appeared in The Wall Street Journal, The Guardian, The Huffington Post, The Bulwark, and others.
web | twitter | facebook | instagram