Review - A Life For a Life 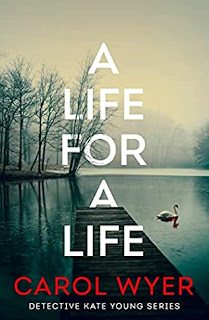 Title:   A Life For a Life
Author:  Carol Wyer
Series:  Detective Kate Young #3
Publisher:  Amazon Publishing UK
Genre:   Mystery/Thrillers
Format:  Kindle ARC
No. of Pages:   363
Date of Publication:   March 15, 2022
My Rating:   5 Stars
DESCRIPTION:
Nobody can get into the mind of an erratic killer—except an unpredictable detective.

When a young man is found lying on a station platform with a hole in his head, DI Kate Young is called in to investigate the grisly murder. But the killing is no one-off. As bodies start to pile up, she is faced with what might be an impossible task—to hunt down a ruthless killer on a seemingly random rampage.

Meanwhile, Kate has her own demons to battle as she struggles to come to terms with her husband’s death. And she is hell-bent on exposing corruption within the force and bringing Superintendent John Dickson to justice. But with the trail of deception running deeper—and closer to home—than she could ever have imagined, she no longer knows who she can trust.

With her grip on reality slipping, Kate realises that maybe she and the killer are not so different after all. But time is running out and Kate is low on options. Can she catch the killer before she loses everything?
Link to purchase the book
MY THOUGHTS:
Superintendent John Dickson, superintendent is corrupt. Detective Inspector Kate Young finally has just enough proof. Just a little bit more and Kate is certain she will prove just who Dickson is. More importantly, Kate is convinced that he is responsible for the murder of her husband. She will not rest until justice is served.

Despite her determination when it comes to Dickson, Kate has another case. When a body is found on a train flatform, after evidently being shot, Kate has to find focus in order to find his killer. Before long, however, even more murders occur, and the clock is ticking. Kate must find a way to stop this killeer.

Meanwhile, Kate begins missing something, the husband the voice of her deceased husband has quieted. He had been with her since his passing keeping her strong in her endeavors. However, the closer she gets to finding out what happened to him the less she hears his voice. There is no doubt that her personal investigation is at conflict with the murder investigation. Kate becomes more and more distant from her team, and at least a few of them begin to get worried.

What a riveting story! From beginning to end the tension never once let up. Compassion and concern for Kate equalled pride her determination shone through time and again. She is a fabulous protagonist and Carol Wyer has developed her character just right - no doubt leaving every reader in her corner. A Life for a Life ended with a bang, leaving me more than eager to read the next book in this series.
Many thanks to Amazon Publishing UK and to NetGalley for this ARC for review. This is my honest opinion.
ABOUT THE AUTHOR:

USA Today bestselling author and winner of The People's Book Prize Award, Carol Wyer writes feel-good comedies and gripping crime fiction.
A move from humour to the 'dark side' in 2017, saw the introduction of popular DI Robyn Carter in LITTLE GIRL LOST and demonstrated that stand-up comedian Carol had found her true niche.
To date, her crime novels have sold over 750,000 copies and been translated for various overseas markets.
Carol has been interviewed on numerous radio shows discussing ''Irritable Male Syndrome' and 'Ageing Disgracefully' and on BBC Breakfast television. She has had articles published in national magazines 'Woman's Weekly', featured in 'Take A Break', 'Choice', 'Yours' and 'Woman's Own' magazines and the Huffington Post.
She currently lives on a windy hill in rural Staffordshire with her husband Mr Grumpy... who is very, very grumpy.
When she is not plotting devious murders, she can be found performing her comedy routine, Smile While You Still Have Teeth.
Social Media:
Website www.carolwyer.co.uk
Blog www.carolwyer.com
Facebook https://www.facebook.com/AuthorCarolEWyer/
Twitter https://twitter.com/carolewyer
Instagram https://www.instagram.com/carolwyer
Pinterest http://www.pinterest.com/carolewyer
Linkedin https://www.linkedin.com/in/carol-wyer-407b1032
Goodreads https://www.goodreads.com/author/show/14925467.Carol_Wyer
YouTube https://www.youtube.com/channel/UCj5O-lvkAYO19S0AMW8VqJQ