BLOG TOUR - The Girls in the Fire 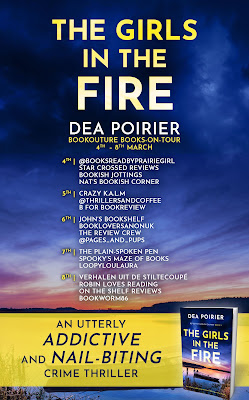 DESCRIPTION:
Harlow looked down at a photo of her victim and couldn’t reconcile it with the body found by the lake. Here was a young and carefree woman, gazing at the camera with her striking emerald green eyes, her long black hair waving in the breeze. But within an instant her future had been extinguished. Harlow had to find out why.When the remains of a young woman are discovered on the edge of Saranac Lake in upstate New York, local law enforcement immediately call Detective Harlow Durant. When she arrives at the scene, she instantly knows this case will get under her skin. Lying just beyond the picturesque lake popular with families are the remains of a victim who has seemingly been burned to death. With very little evidence remaining, Harlow begins scouring missing persons reports.The victim is identified as twenty-six-year-old Ellie Gordon—a fun-loving young woman who worked in the bookstore and enjoyed going out with friends. When her mother comes to ID the body, she reports her daughter’s gold crucifix missing and the hunt begins to locate it and any potential DNA evidence. But as Harlow starts to piece Ellie’s last movements together, another body is found. The victim was killed in exactly the same way and worked with Ellie.Witness statements identify a local man who was obsessed with both women and when Harlow sees video evidence of him pawning the gold necklace, she thinks she has her man. But when he too winds up dead, Harlow has to start over. The only other link to the women is Gavin Croswell, one of the most powerful men in the town. But with a whole host of alibis, pinning the murders on him is almost impossible.With time running out to find the killer before another woman loses her life, the case soon becomes personal when Harlow’s car is violently run off the road. Someone wants to warn her off the case and they will use anything they can to threaten her. Even if it means exposing her own dark secret.Can Harlow confront her demons to save another innocent life from being lost? And just how much is she prepared to sacrifice?An absolutely addictive serial killer thriller perfect for fans of Melinda Leigh, and Robert Dugoni’s Tracy Crosswhite series.
BUY LINK:
Amazon: https://geni.us/B09KCDJLT4social
MY THOUGHTS: 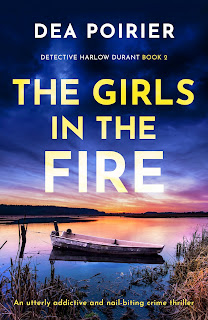 Title:   The Girls In the Fire
Author:  Dea Poirier
Series:  Detective Harlow Durant #2
Publisher:  Bookouture
Genre:   Mystery/Thrillers
Format:  Kindle ARC
No. of Pages:   302
Date of Publication:   March 4, 2022
My Rating:   4 Stars
Detective Harlow Durant’s newest case involves the tragic murders of two young women. Both bodies were beaten and burned. As Harlow and her partner Lucas begin investigating, they look for a connection, one they did indeed find. Apparently both women had dated the same man. Meanwhile, there are snippets of Harlow’s past throughout the book as she grew up the child of a serial killer.
Due to her tragic past, Harlow easily identifies that a serial killer is at work now and she strives to find them before yet another body is found. Harlow’s past and present consistently clash, especially when her mother comes storming back into her life. Harlow is determined to push her violent memories aside and hopes to ignore her mother as she is determined to find the killer before yet another body is found. The harder she pushes, the more personal things become. In fact, she is seemingly unconcerned for her safety as she draws closer to uncovering facts about the possible identity of the killer.
With riveting twists and turns, excellent pacing and an intriguing protagonist, this book was an utterly compelling read, one impossible to put down. Written from Harlow’s first-person POV, readers can easily see things from her perspective, especially as she uses her disturbing past to identify critical clues. As things come to a head, the book closes with a cliffhanger, thus creating an intense desire to read the next book in the series.
Many thanks to Bookouture and to NetGalley for this ARC for review. This is my honest opinion.
ABOUT THE AUTHOR:

Author Dea (D.H) Poirier is the author of NEXT GIRL TO DIE, which hit #1 in the Amazon charts. She was raised in Edmond, Oklahoma, where she got her start writing in creative writing courses. She attended The University of Central Oklahoma for Computer Science and Political Science. Later, she spent time living on both coasts, and traveling the United States, before finally putting down roots in Central Florida. She now resides somewhere between Disney and the swamp. She spends her days at her day job as a President of Digital Marketing, and her nights writing manuscripts.
https://www.dhpoirier.com/
https://www.facebook.com/dhpoirier/
https://www.instagram.com/deapoirier/
https://twitter.com/deapoirierbooks