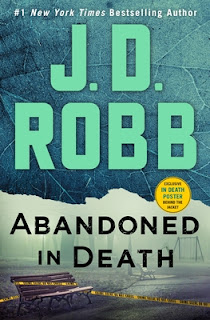 Title:  Abandoned in Death
Author:  J. D. Robb
Series:  In Death #54
Publisher:  St. Martin's Press
Genre:  Mystery/Thrillers
Format:  Kindle ARC
Date of Publication:  February 8, 2022
No. of Pages:  368
My Rating:  5 Stars
DESCRIPTION:
Homicide detective Eve Dallas must untangle a twisted family history while a hostage’s life hangs in the balance—in the new In Death novel by #1 New York Times bestselling J. D. Robb.
The woman’s body was found on a bench in a New York City playground. She was clean, her hair neatly arranged, her makeup carefully applied. But other things were very wrong—like the tattoo and piercings, clearly new. The clothes, decades out of date. The fatal wound hidden beneath a ribbon around her neck. And the note: Bad Mommy, written in crayon as if by a child.
It seems clear the killer’s childhood was traumatic—a situation Eve is all too familiar with herself. Yet the clues point to a perpetrator who’d be around sixty, and there are no records of old crimes with a similar MO. What was the trigger that apparently reopened such an old wound and sent someone over the edge? When Eve learns that other young women have recently vanished, the case grows even more urgent—and to solve it she’ll need to find her way into a hidden place of dim light and concrete, into the distant past, and into the depths of a shattered mind.
Link to purchase the book
MY THOUGHTS:
One woman dead. Two missing. Time is a factor if either of them will be found alive. Detective Eve Dallas is facing a very difficult case. As always, her attention is more than riveted to solving this latest murder. The fact that the woman's body was found at a playground near her dear friends Mavis and Leonardo's neighborhood presses Eve even more. There is one clue that is rather curious - a note that says "Bad Mommy."
What could that pertain to? Well, between Eve and her team, as well as resident Dr. Mira, Eve begins to unravel events that took place decades previously. Actually. as the book opens there is a very sad case of a mother who was prepared to give up on life and this including taking her young son with her. What happened in that case, to the woman, to the child, and what does that have to do with the current case?
I have read thousands of books in my lifetime and for the life of me I could not come close to finding a similar plot line. A plot that took some time to unfold for Eve. Her skills of deduction, along with occasional help from her billionaire hunk husband Roarke, proved invaluable when it came to desperately try to find the other two missing women.
This 54th book in J. D. Robb's amazing series was a one-sitting read from start to finish. Impossible to put down, especially when the feeling of working alongside Eve as she connected the past with the present events. The sense of urgency never once let up.
I have read each and every book in this series - including the novellas - and I must say that Robb never ceases to surprise me. To engage me. To keep my attention from beginning to end. It is with eager anticipation that I look forward to reading Desperation in Death, set for release in September, 2022.
Many thanks to St. Martin's Press and to NetGalley for this ARC for review. This is my honest opinion.
ABOUT THE AUTHOR: