Months after she disappeared, a high school senior is found floating in the town’s harbor, alive but unconscious. Where has Emily been, and how did she get into the water? In Kristen Bird’s “gripping” (Publishers Weekly) debut The Night She Went Missing, three friends-to-frenemies mothers in a close-knit, wealthy Texas community decide to investigate after the police hit a dead end. While each woman has secrets to protect, they’ll all be forced to look at their own children – or each other’s – to uncover the truth.

With the relentless pacing and complex female characters of Big Little Lies and an expertly crafted small town setting, The Night She Went Missing introduces Kristen Bird as a new force in the world of domestic suspense. Her novel goes well beyond that, exploring complex questions about mothers and daughters, loss, and the line between taking chances and living dangerously.
BUY LINKS:

Books-A-Million | Powell’s | Murder by the Book 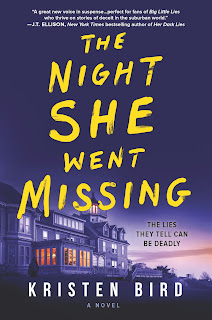 Title:   The Night She Went Missing
Author:  Kristen Bird
Publisher:  MIRA
Genre:   Mystery & Thrillers
Format:  Kindle ARC
No. of Pages:   352
Date of Publication:  February 8, 2022
My Rating:   5 Stars
In this fantastic debut novel by Kristen Bird three mothers make unlikely allies when one of their teen children goes missing. The missing 17-year-old is named Emily and she never returned home after a night out with friends. Although she left the party with a boy named Alex, he swore she left ahead of him.
The three mothers now working together are Catherine, Leslie and Morgan, once close friends but now they barely get along. They begin to wonder what has been going on with their children and if Emily's disappearance means much more than they have imagined. Catherine is Emily's mother and she searches vigorously for her daughter. She is determined that she will find Emily no matter what it would take.
I love how this story developed. In fact, as it opens, Emily is rescued. As the story progresses, it goes to the past to her disappearance and slowly builds tension as to what happened to her that night and why she was found three months later. Full of drama and angst, the story is told with multiple viewpoints and has more than one surprising twist. In fact, as things begin to unfold the fact that secrets and lies have played into Emily's disappearance proves more than troublesome. What an utterly intense story!
Many thanks to MIRA and to NetGalley for this ARC for review. This is my honest opinion.
Please enjoy the following excerpt:
ABOUT THE AUTHOR:

Kristen Bird lives outside of Houston, Texas with her husband and three daughters. She earned her bachelor’s degree in music and mass media before completing a master’s in literature. She teaches high school English and writes with a cup of coffee in hand. In her free time, she likes to visit parks with her three daughters, watch quirky films with her husband and attempt to keep pace with her rescue lab-mixes. THE NIGHT SHE WENT MISSING is her debut novel.