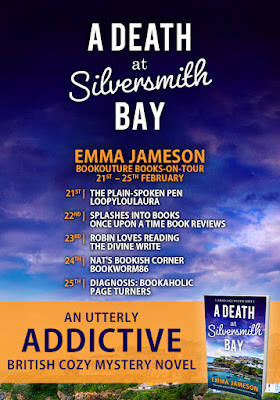 Librarian Jemima Jago can’t resist a whodunnit, but finding a body in a bookshop is a plot twist she could never have expected…

Jem Jago is back at work with her antique books, and spending her weekends exploring her new home—the windswept Isles of Scilly—in her little sailboat, Bellatrix. She’s really starting to settle into island life. Unfortunately, murder in the Scillies is not as rare as some of her manuscripts…On a trip out to picturesque Penzance with best friend Micki, the pair stumble across an intriguing mystery, not of the fictional kind. In Tatteredly’s second-hand bookstore, they discover the body of beautiful Gina Marrak, Micki’s former sister-in-law.Jem can’t bear to see Micki so distraught, and with the hapless Detective Conrad in charge of the inquiry, she must do some sleuthing of her own to find out the truth. As she convinces Gina’s so-called friends to talk, Jem learns she wasn’t actually well liked in her little corner of Penzance. Did the jilted lover, the pretentious pub landlord or the rowdy real estate agent bump off poor Gina?Poking around the scene of the crime, Jem finds an unusual book which leads her down an unlikely path. But can Jem get to the bottom of the mystery before the terrible tale comes to an end for her too?A fun, cozy page-turner filled with mystery and intrigue, from the New York Times and USA Today bestselling author Emma Jameson. Fans of M.C. Beaton, Faith Martin and Agatha Christie will be totally hooked! 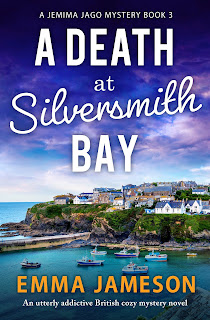 Title:   A Death at Silversmith Bay
Author:  Emma Jameson
Series:  Jemima Jago Mystery #3
Publisher:  Bookouture
Genre:   Cozy Mystery
Format:  Kindle ARC
No. of Pages:   263
Date of Publication:   February 21, 2022
My Rating:   4 Stars
Jemima Jago had spent a few months on the Isles of Scilly, and while there she gained some notoriety - she became known as Scilly's very own sleuth. Back home in Penzance, she plans on getting back to her job as a special collections librarian. As the story opened, Jem was surprised to find her sister Tori in her home. More significantly, Jem had called the police in order to try to figure out what was going on, especially considering that she thinks she found a possible murder weapon, This is when she realized that one of the officers, DS Conrad, was going to be a difficult fellow that she might have to evade why she sought to find out what happened.
Jem was quite certain that she left her home tidy, yet her apartment was overpowered by a rank odor. What is more is that Jem soon discovers significant evidence of yet another murder. Tori has a story, a rather wild one at that, and things just do not add up for Jem. Quite naturally, she plans on getting to the bottom of the recent turn of events. More than adept at solving crimes. Jem doesn’t shrink back for a single moment.
With the aid of her friends, most notably Micki Latham, Jem pays close attention the fact that there is definitely evidence of murder and this leads them to travel to a bookstore. This is how they discover who the murder victim was. Another character of note is Rhys Tremayne, Jem’s former (possibly future?) boyfriend, and he also assists in the investigation. Let’s not forget Wotsit, the cat that Jem found in her apartment that apparently is now her pet. Meanwhile, as the story progressed, it seems that Rhys was not the only one that Jem is thinking about in a romantic sense. It will be rather interesting to see how that develops in future books in this series.
What an enjoyable cozy mystery and a very nice addition to the series. The setting, the characters, and the intrigue made this book a thoroughly engaging read. The first two books are A Death at Seascape House and A Death at Candlewick Castle. I am very much looking forward to continuing the series with the next story.
Many thanks to Bookouture and to NetGalley for this ARC for review. This is my honest opinion. 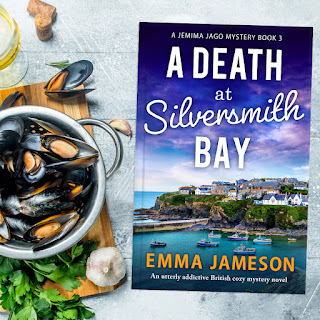 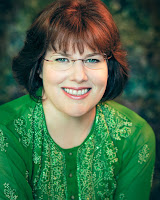 Emma Jameson writes mysteries that readers call witty, romantic, and full of surprises. An aspiring novelist since age seven, she took a long, twisty route to the New York Times and USA Today bestseller lists. After years of working at a major medical center, her first novel, cobbled together on nights and weekends, became a runaway e-book bestseller. Now she writes full-time and has sold over half a million books. A compulsive reader and information hoarder, Emma is always searching for that fascinating nugget or startling fact that will spark another novel. A lifelong Anglophile, she resides in the United States, where she enjoys swimming, yoga, and serving the needs of not one, not two, not three, but four cats.