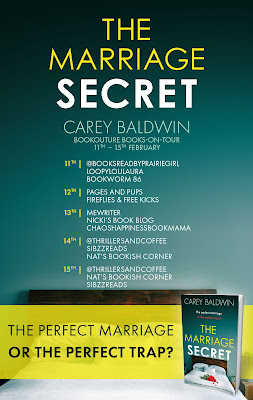 He married me despite my darkest secret. But am I safe now that I know his?

From the outside, my marriage to Zach was perfect: dream home, a perfect baby girl and passionate, all-consuming love. When we met, I confessed my darkest secret to him and he never judged me for it. Instead, he vowed to always protect me whatever the cost.

But as I cradle my gorgeous baby, I have to accept that the husband who used to be my everything, has changed. At first it was little things: expecting me to keep to a strict schedule, picking out my clothes for me. Now, he controls every aspect of my life: from how much money I have, to when I leave the house and who I can see.

One fateful night, a young woman is found murdered and Zach is a potential suspect. Turning towards me, a look of warmth returning to his eyes, he swears he’s innocent, and I realize there is only one solution. If I agree to be his alibi, he will keep my secret and our daughter can grow up in a loving home. In that moment, I do what any faithful wife would do: I stand by him.

But I know deep down, only one of us will make it out of this marriage alive.

A completely unputdownable and twist-filled psychological thriller from USA Today bestselling author Carey Baldwin. Fans of The Wife Between Us, The Marriage and Gone Girl will be totally addicted to The Marriage Secret. 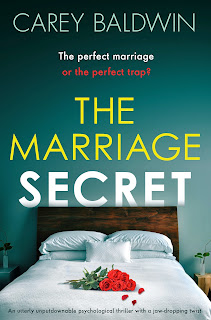 Title:   The Marriage Secret
Author:  Carey Baldwin
Publisher:  Bookouture
Genre:   Psychological Thriller
Format:  Kindle ARC
No. of Pages:   302
Date of Publication:   February 11, 2022
My Rating:   4 Stars
The Marriage Secret is about a marriage based on threats as a result of a devastating secret. Holly and Zach Bancroft seem to have it all, including a gorgeous home and a delightful new baby. He is a very successful doctor, and has earned quite a bit of respect. Holly had a fabulous career herself as a speech pathologist but was more than happy to be a stay-at-home mother, at least for the time being. However, nothing is as it seems with the couple. This book just might remind readers of Rebecca by Daphne du Maurier or even the film Gaslight. Despite outward appearances, Zach makes it his aim to keep Holly exactly where he wants her, using more than one method of control, even to the point of her doubting her ability to care for their baby. In fact, Zach's control grows by leaps and bounds in this book, something that might make readers cringe on Holly's behalf. Zach has been written as an utterly vitriolic character, unlikeable to the nth degree. When Zach becomes a person of interest in the murder of a young colleague, he calls in the cards. Holly will alibi him or he will tell her secret.What brought this couple together in the first place? What is the ugly secret that Zach is holding over Holly's head to keep her in what is most certainly an unhappy marriage? While every lasting marriage starts with a firm foundation, Holly's agreeing to marry Zach had the writing on the wall. With Zach being alternately caring and cruel, Holly is forced to walk on eggshells, never knowing what next Zach has in store. Her wardrobe, her finances, even her mentality - Zach holds it all in his hands. Told entirely from Holly's perspective, events continued to unfold in disturbing fashion.  While this book proved to be a page-turner, with Holly struggling to show backbone, there was a point when the plot almost seemed predictable. In fact, there was one plot line that more than one reader might guess, and although the story was intriguing, guessing a major twist might take away some enjoyment of the book. Even so, the tension was kept at a high rate. With just a few principal characters, this story is full of drama and angst. All delivered with excellent pacing.Carey Baldwin spun a compelling tale of who could possibly win in this disaster of a marriage. Any reader would know that Zach and Holly's marriage did not have a strong basis and it was very interesting to see what the end result would be. Inasmuch as possibly recognizing a major plot twist seemed to wrap everything up, Baldwin took readers on an exciting ride, which will no doubt leave most readers shocked by the impossible to predict ending.
Many thanks to Bookouture and to NetGalley for this ARC for review. This is my honest opinion.
ABOUT THE AUTHOR:

By day Carey is a dedicated pediatrician. By night she's a USA Today bestselling and award winning author of edgy suspense. In addition to her MD, Carey also holds a PhD in clinical psychology. She loves reading and writing stories that keep you off balance and on the edge of your seat. In her spare time she enjoys hiking and chasing wildflowers.
Author social media
Twitter: @careybaldwin
Instagram: @authorcareybaldwin
Website: https://www.careybaldwin.net/