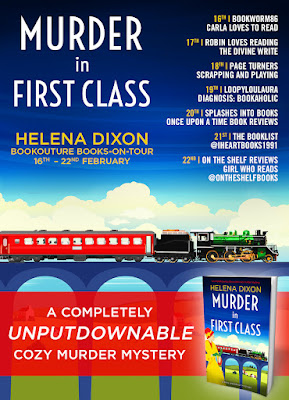 All aboard a train bound for… murder.Kitty Underhay is looking forward to a week of long lunches and wedding planning with her husband-to-be, Captain Matthew Bryant. But the plan is derailed when he is called on to collect a former comrade-in-arms, arriving on the 15:50 from Bakerloo. As the train bearing Simon Travers pulls up to the platform, a piercing scream rises over the screech of its brakes. Travers is dead in his seat, a dagger in his heart.Who gave this defenceless man a one-way ticket to the next life? And why? And could Matt’s close connection put him at risk? Only a few individuals had access to Travers’s compartment, and Kitty must find out which of these seemingly benign passengers is in fact a cross-country killer.But when Kitty’s prime suspect, the travelling salesman with no merchandise, is found murdered, she is stumped. Until she makes the connection between the two victims and realises that this murderer has an even more deadly destination in mind. Can she stop them before they strike again? Or will Kitty’s own next stop be the graveyard?A pitch-perfect and totally gripping Golden Age historical cozy mystery! Perfect for fans of Agatha Christie, T.E. Kinsey and Lee Strauss. 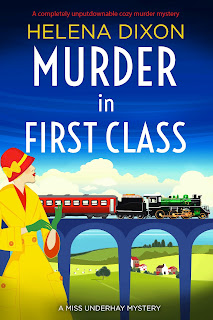 Title:   Murder in First Class
Author:  Helena Dixon
Series:  Miss Underhay #8
Publisher:  Bookouture
Genre:   Cozy Mystery
Format:  Kindle ARC
No. of Pages:   248
Date of Publication:   February 14, 2022
My Rating:  4 Stars
Kitty Underhay had been looking for information about her mother. She is finally ready for closure now that she is certain about who is responsible for her mother's murder. In fact, her new fiancé, Captain Matthew Bryant, is called into play when he is tasked to briefly house Simon Travers, a witness as to what happened to Kitty's mother. As Kitty and Matthew head to the train station to pick up his soon-to-be houseguest, they discover that he is dead, killed during the train ride. The fact that the compartment he was riding in only contained a few other travelers, discovering the murderer should be easy.
Kitty is determined to discover the murderer, thus she begins to make inquiries. However, things do not prove easy as the very individual she is certain committed the crime is also murdered. Even more determined than ever, Kitty feels she now has two murders to solve. Matthew plays his own role, as his former employer expects him to find answers.
One of the passengers on the train is someone that Kitty is not all that fond of, Mrs. Craven, but Kitty has no doubt she had nothing to do with the murder. Despite her dislike of the older lady, Kitty finds herself interested in what she has to say. Meanwhile, Kitty recently was on holiday, with only a few days left until she is back to managing her hotel, The Dolphin. In fact, while investigating, Kitty often wonders what her future will hold when she marries Matthew.
What a delightful book in a thoroughly enjoyable series. Each book was intriguing, and no doubt will always leave the reader guessing. This series has definitely grown on me and I love that each book is fresh and exciting. One thing I really enjoyed about this book is that the first murder victim was traveling with his dog, leaving the pet without anyone to care for him. Matthew quickly adopts the mischevious animal, and this brings another enjoyable layer to this lovely story. I am already looking for the 9th book in this series, Murder at the Country Club, set for release in just a few months.
Many thanks to Bookouture and to NetGalley for this ARC for review. This is my honest opinion. 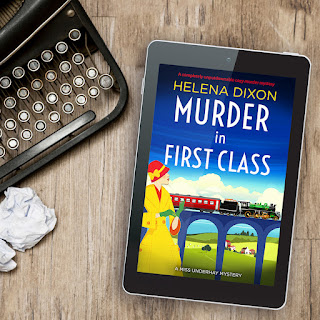 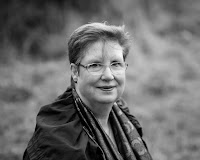 Helena Dixon was born and continues to live in the Black Country. Married to the same man for over thirty years she has three daughters, a cactus called Spike, a crazy cockapoo and a tank of tropical fish. Helena was the RNA winner of the Romance Prize in 2007 and Love Story of the Year 2010.
Social Media
Twitter:  https://twitter.com/NellDixon
Instagram: https://www.instagram.com/helenadixonuk