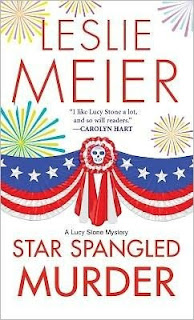 Lucy Stone is in the doghouse--with her next-door neighbor, Mrs. Prudence Pratt. It seems that Kudo, the Stones' misbehaving mutt, has developed a taste for Mrs. Pratt's blue-ribbon winning chickens, as well an escape artist's talent for sneaking out. With the Fourth of July coming up, Lucy doesn't want to set off any more fireworks with the crabby Prudence.

Another sign that the crazy days of summer are in full swing arrives when a group of naturists--a.k.a. nudists--descends on Tinker's Cove, skinny-dipping at the pond that borders Mrs. Pratt's property, giving her something else to complain about. Worse still, the local lobstermen are upset about poachers--and suspicion falls on Mrs. Pratt's husband and son. Then the July Fourth fireworks are canceled to protect a patch of extremely rare purple-spotted lichen, and Mrs Pratt is the victim of a hit and run.

Tinker's Cove is full of suspects, but none with so personal a motive as the Stones. Their feud with Mrs. Pratt has put them at risk of losing their freedom this Independence Day--unless Lucy can start things off with a bang by catching a red, white and blue killer. . .

Mrs. Prudence Pratt is Lucy Stone’s nemesis. More accurately put, Mrs. Pratt is Kudo’s, the family’s dog, nemesis. Kudos keeps escaping and killing her blue-ribbon chickens. Before the Stone family can correct the matter, Mrs. Pratt will go to any means necessary to have the dog destroyed. As if enough isn’t going on in Tinker’s Cove, there are some trying to cancel the upcoming fireworks display and a colony of nudists, or more accurately referred to, naturists, have descended upon the local pond.
Oh, and let’s not forget the serious concern that the lobster trade might be affected by poachers. As a part-time reporter, Lucy is trying to cover at least one of these stories...well, she would rather leave the naturists to her boss.
Sort of a spoiler here...but each story in this cozy mystery series contains a murder...
Mrs. Pratt is dead. Her manner of death is beyond all doubt a murder. Since Lucy is concerned that the police are looking at her for it, she decides to check into it for herself. Will she be able to locate the murderer without bringing danger to herself?
For a relatively short book, the story is quite busy. There is the requisite family drama, the aforementioned murder, Lucy’s hectic job, and a bit more. This is a nice addition to the series that I have been enjoying thus far. This is a quick read, and despite some serious issues, it is rather light-hearted.

Star Spangled Murder is book eleven in the series. The next book is New Year’s Eve Murder with twenty-five to-date. These are all delightful reads and I look forward to continuing. I encourage readers of this review to look at my other reviews from this series on this blog. Also, here is a link to her series in order:
https://www.fantasticfiction.com/m/leslie-meier/.