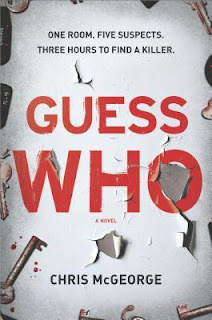 A debut thriller that offers a fresh, modern twist on the classic "locked room" mystery novel, for readers of Noah Hawley and Jeffery Deaver

The rules are simple.

But the game is not.

At eleven years old, Morgan Sheppard solved the murder of a teacher when everyone else believed it to be a suicide. The publicity surrounding the case laid the foundation for his reputation as a modern-day Sherlock Holmes. He parlayed that fame into a gig as TV’s “resident detective,” solving the more typical tawdry daytime talk show mysteries like “Who is the father?” and “Is he cheating?”

Until, that is, Sheppard wakes up handcuffed to a bed in an unfamiliar hotel room. Around him, five strangers are slowly waking up, as well. Soon they discover a corpse in the bathtub and Sheppard is challenged to put his deductive skills to the test. One of the people in the room is the killer. He has three hours to solve the murder. If he doesn’t find the killer, they all will die.

An ingenious, page-turning debut, Chris McGeorge’s Guess Who matches the high-wire plotting of classic “locked room” mysteries into the unstoppable pacing of the modern-day thriller.

A murder puzzle. Three hours or they all die. Six people locked in a hotel room. Morgan Sheppard and five others, Alan, Mandy, Constance, Ryan and a young girl referred to as Headphones. These are all complete strangers to Morgan, the Resident Detective on a popular TV show, yet he has the unenviable task of solving the murder of a dead man in the bathroom before time runs out.
It doesn’t take Sheppard long to discover that he is the real target. What’s more is that there appears to be no method of escape. Furthermore, if Sheppard does not correctly identify to murderer, the entire hotel is rigged with explosives.
The story is told in two time frames, presently as Sheppard must interview each of the five others, and snippets of his past. During these snippets we learn how Sheppard became the man that he is. Everyone has their own suspicions, creating massive distrust and ultimate danger.
While I was quite invested in the intrigue that was developed here, unfortunately things became a bit implausible, and this knocked things down for me. I do applaud the creativity that the author employed in this story, so I definitely was eager to identify the killer. If you enjoy Agatha Christie type novels, with edge of a thriller, then Guess Who might just appeal to you.
Many thanks to Hanover Square Press and to NetGalley for this ARC. This is my honest opinion. 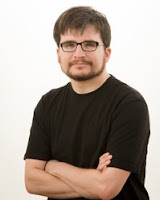 Chris McGeorge has an MA in Creative Writing (Crime / Thriller) from City University London where he wrote his first crime novel Dead Room for this thesis. He constantly told stories from a young age, whether they took the form of comics, short stories or scripts.

He is a lover of Golden Age crime, like Christie and Conan Doyle, leading his crime stories to be a mix of the old and the contemporary. He likes weird and wonderful plots, with plenty of intrigue and twists.

His often coherent ramblings about everything pop culture can be found on his blog Festival of Blood and occasionally he produces the Sarcasmicast podcast with a group of friends.