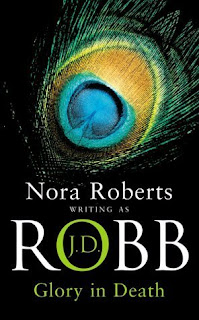 It is 2058, New York City. In a world where technology can reveal the darkest of secrets, there's only one place to hide a crime of passion-in the heart. Even in the mid-twenty-first century, during a time when genetic testing usually weeds out any violent hereditary traits before they can take over, murder still happens. The first victim is found lying on a sidewalk in the rain. The second is murdered in her own apartment building. Police Lieutenant Eve Dallas has no problem finding connections between the two crimes. Both victims were beautiful and highly successful women. Their glamorous lives and loves were the talk of the city. And their intimate relations with men of great power and wealth provide Eve with a long list of suspects -- including her own lover, Roarke.

Famous women are being killed. There must be a connection. It is up to Lieutenant Eve Dallas to pull together clues before even more women are killed. Just as in her most recent murder case, Eve’s lover Roarke is one of the many suspects.
What is it about the murder victims, and where does Roarke fit in? Has a serial killer risen up in 2058 New York? Can Eve follow her instincts and completely rule Roarke out, all before another woman is brutally slain? Eve certainly has her hands full and there are no shortage of suspects.
For character development, J. D. Robb is definitely on point. Eve is relentless, focused and principled. She is forced to let a side of herself out that she thought she held dear. Her past is gently touched on, and this is quite revealing. Roarke is a dream, richer than rich, beyond handsome and sensitive to a fault. They are the best-paired couple I have ever had the pleasure of meeting in the pages of a book.
If you love the way Eve and Roarke came to be a couple in the first book of the series, Naked in Death, then you will absolutely swoon in this book! Melt even.
I can’t say much more, other than the conclusion has me dying to fit in the next book in the series, Immortal in Death, as soon as possible. I must admit to being just a bit jealous of those who can devour these back-to-back. This series is thriving and there are 49 books so far, well into 2019.

Nora Roberts was born in Silver Spring, Maryland, the youngest of five children. After a school career that included some time in Catholic school and the discipline of nuns, she married young and settled in Keedysville, Maryland.
She worked briefly as a legal secretary. “I could type fast but couldn’t spell, I was the worst legal secretary ever,” she says now. After her sons were born she stayed home and tried every craft that came along. A blizzard in February 1979 forced her hand to try another creative outlet. She was snowed in with a three and six year old with no kindergarten respite in sight and a dwindling supply of chocolate.
Born into a family of readers, Nora had never known a time that she wasn’t reading or making up stories. During the now-famous blizzard, she pulled out a pencil and notebook and began to write down one of those stories. It was there that a career was born. Several manuscripts and rejections later, her first book, Irish Thoroughbred, was published by Silhouette in 1981.
Nora met her second husband, Bruce Wilder, when she hired him to build bookshelves. They were married in July 1985. Since that time, they’ve expanded their home, traveled the world and opened a bookstore together.
Through the years, Nora has always been surrounded by men. Not only was she the youngest in her family, but she was also the only girl. She has raised two sons. Having spent her life surrounded by men, Ms. Roberts has a fairly good view of the workings of the male mind, which is a constant delight to her readers. It was, she’s been quoted as saying, a choice between figuring men out or running away screaming.
Nora is a member of several writers groups and has won countless awards from her colleagues and the publishing industry. Recently The New Yorker called her “America’s favorite novelist.”
web / facebook / pinterest / twitter