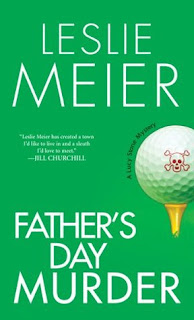 When her part-time reporting gig gives Lucy the opportunity to attend a Boston newspaper conference, she looks forward to the vacation from domestic bliss. But upon leaving Tinker’s Cove, she quickly discovers that alone time can be kind of…lonely. And in between libel workshops and panel discussions, Lucy takes a guilt trip. She feels terrible that she won’t be home to help her husband celebrate Father’s Day.But when Luther Read—head of a nearly bankrupt newspaper dynasty—suddenly drops dead, Lucy has other things to think about. Murder, for instance. She’s not buying the theory that Luther died of an asthma attack. The man just had too many enemies. Always the intrepid snoop, Lucy vows to investigate. But she can’t help wondering if her name will end up on a byline—or in an obit…

Part-time reporter Lucy Stone is about to get a break from her family to attend a newspaper conference. Unfortunately, it is just before Father’s Day, so Lucy has some juggling to do. It’s not as fun as she imagines. She misses her family more than she thought she would, the panels are rather boring, and some of the other attendees really get on her nerves.
Shockingly, Luther Read, owner of a virtually bankrupt newspaper suddenly dies, and the circumstances are quite suspicious, despite being first ruled an asthma attack. As a matter of fact, Luther had enemies, so there is more than one suspect.
Luther Read is no stranger to Lucy. His family has a second home in Lucy’s hometown of Tinker’s Cove. So, per usual, Lucy decides to investigate. All the while, Lucy gets to enjoy parts of Boston and even has time to shop for her family. Meanwhile, husband Bill works hard at running their household.
As Lucy goes further in seeking out Luther’s murderer, she again places herself in harm’s way. This cozy mystery is fast-paced with Lucy being out of her element, while she excels at being an amateur detective.

Father’s Day Murder is book ten in the series. The next book is Star Spangled Murder with twenty-five to-date. These are all delightful reads and I look forward to continuing. I encourage readers of this review to look at my other reviews from this series on this blog. Also, here is a link to her series in order: https://www.fantasticfiction.com/m/leslie-meier/.