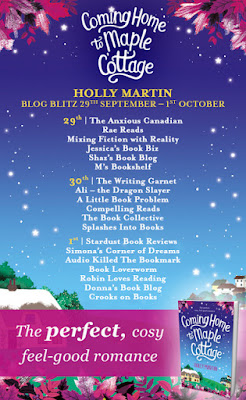 Today is my day on the Blog Blitz for Coming Home to Maple Cottage by Holly Martin.

This utterly addictive new novel from bestselling author Holly Martin will make you smile until your cheeks hurt, sob tears of pure joy and fall head over heels in love with a totally unforgettable romance…

Isla Rosewood is creating a new life for herself and her sweet nephew Elliot in their cosy, yellow-brick family cottage, brimming with special memories. Living in Sandcastle Bay was never part of Isla’s plan but, after her brother Matthew’s tragic accident, her whole world changed as she unexpectedly became a mother to the little boy she adores so much.

Leo Jackson was always known as Matthew’s fun-loving and wild best friend. But now Matthew is gone, it’s time to put his colourful past behind him. His role as Elliot’s godfather is the most important thing to him. And even though Leo and Isla are two very different people, they both want to give Elliot the childhood he deserves.

As the three of them enjoy time together watching fireworks, baking cakes and collecting conkers, Isla begins to see a softer side to charming Leo, with his twinkling eyes and mischievous sense of humour. And, despite herself, she begins to fall for him.

But does Leo feel the same way? Isla knows their situation is complicated but is it too complicated for true love… or will the year end with a happy new beginning for them all?


A glorious, feel-good romance that will make you want to snuggle up under a warm blanket with a hot chocolate and the one you love. If you enjoy reading Sarah Morgan, Jenny Oliver and Lucy Diamond this book is for you. 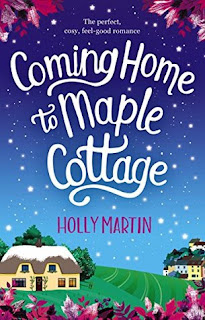 What an endearing read! How can you not love a story where three people just need to be made into a family? Isla Rosewood has left a glamorous life in London to become mother to her orphaned nephew. She tragically lost her brother Matthew and is now guardian to five-year-old Elliot. When Elliot was born, Leo Jackson, Matthew's best friend, was made his godfather. Now both Isla and Leo are devoted to Elliot. They also become very best friends. While it is true that they did share one idyllic night together several years previously, their time and attention is directed towards Elliot.

All Leo wants to do is to take care of Isla and Elliot and repeatedly asks her to marry him. She staunchly refuses each time, because she wants love in her marriage, not companionship. Since Leo cannot offer that to her, Isla just wants him to continue to be there for the child.

What marvelous characters. Coming Home to Maple Cottage is the third in the series. We are brought back into so many lives where love has been found. Now all of them are very concerned, and want Leo and Isla to find that kind of love for each other. While the love story was utterly endearing, the character who stole my heart is little Elliot. What a kid! I absolutely love children in these tender romances. He did not take over the story in any way, but did play a warm, pivotal role. He is a delightful bundle of energy that I am certain most readers will adore as much as I did. Another fun character is Aunt Agatha. She absolutely tickled me.

I did find a couple of minor issues with the story, including the behavior of one of the characters, which I found a bit less than ethical. But this community is so tight-knit that they bent over backwards to protect the interests of the little family of Leo, Isla and Elliot. One gentle factor in this story is the romance itself. Leo held himself back from Isla, and the reasons were truly heartbreaking. I did truly enjoy the setting in the book, and loved the descriptive nature of even the beach at one point - "the sea today an inky blue under a mackerel sky." The colorist in me wanted to pull out my supplies!

Don't miss this tender, engaging read by Holly Martin. The entire series is a true delight and is definitely one not to be missed. Although this certainly could be read as a standalone, I do believe readers will enjoy the entire series as a whole.

Reviewer's Note: This is book #3 in the series. The previous review link for The Cottage on Sunshine Beach: 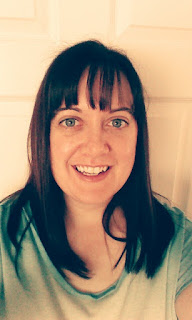 Holly lives in a little white cottage by the sea. She studied media at university which led to a very glitzy career as a hotel receptionist followed by a even more glamorous two years working in a bank. The moment that one of her colleagues received the much coveted carriage clock for fifteen years’ service was the moment when she knew she had to escape. She quit her job and returned to university to train to be a teacher.

Three years later, she emerged wide eyed and terrified that she now had responsibility for the development of thirty young minds. She taught for four years and then escaped the classroom to teach history workshops, dressing up as a Viking one day and an Egyptian High Priestess the next. But the long journeys around the UK and many hours sat on the M25 gave her a lot of time to plan out her stories and she now writes full time, doing what she loves.