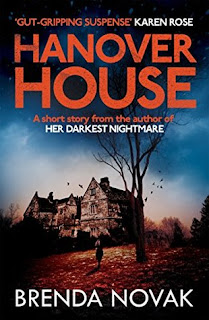 Psychiatrist Evelyn Talbot has dedicated her life to analysing psychopaths. Why they act as they do. How they come to be. Why they don't feel remorse. Her only goal is to use her knowledge to find and stop them.

Having been tortured and left for dead when she was just a teenager by her high school boyfriend, Evelyn's determined to understand how someone she trusted so much could turn on her. Establishing a revolutionary new medical health centre in the remote town of Hilltop, Alaska, where she observes these killers is the final step in years of studying which will give her the answers she needs.

Keeping these killers inside and the residents of Hilltop safe is Evelyn's responsibility, but it will only take one little thing to go wrong for the danger they pose to become all too real...

The second book in the Evelyn Talbot series, HELLO AGAIN, is available to buy in paperback and ebook now.

To be fair, I must warn readers that this book is incredibly intense. It deals with gruesome subjects like murder, torture and rape. It is not explicit, but it is the basis for this series.

Psychiatrist Evelyn Talbot heads to Hilltop, Alaska, to a new medical health center to study the world's worst psychologically disturbed minds. The center is named Hanover House and it the first of its kind. Will she and her colleagues be able to figure out why men kill, rape, and commit other such heinous crimes? By studying all aspects of behavior Evelyn hopes to understand why psychopaths have such abominable behavior.

The story is interrupted at times to tell of a tragic time in Evelyn’s past when she was kidnapped, tortured and left for dead when she was a teenager. The person that did these horrible things to her was her high school boyfriend Jasper Moore. What Jasper did to Evelyn was just the tip of the iceberg for the violently ill young man. He was never charged and found, and unbeknownst to Evelyn, has changed his name to Andy Smith. In her thirties now, Evelyn is still living in fear of Jasper. However, it is that life experience that led to her career as a psychiatrist.

It is no surprise that the town’s citizens in Hilltop are extremely unhappy about the new facility and the violent patients that will be transferred there. Alaska State Trooper, Sergeant Amarok, is especially frustrated about this. When he learns that the main doctor is a woman, he is very concerned that she will be around so many dangerous men. This was very worrisome to Amarok, but once he meets Evelyn his feelings about the matter intensify as he becomes quite drawn to her. So the entire situation has become very personal to him. This concern has a solid basis when it becomes evident that Evelyn is in extreme danger from another source - Jasper Moore from her past. Jasper has tracked Evelyn down. He has spent two decades brutally murdering women with Evelyn as his ultimate prize in mind.

The story shifts as Amarok expresses his strong attraction to Evelyn, but she tells him that she has no intention on becoming romantically involved with him. As accomplished as Evelyn is, she is still severely traumatized and still lives in fear. This fear could be the ruin of her. A slow build of romance develops between Evelyn and Amarok. As the story progresses, Evelyn is forced to deal with her fear of intimacy.

This novella, Hanover House, is the first book in the Evelyn Talbot Chronicles, to be followed by Her Darkest Night, Hello Again and Face Off. This exciting prequel was barely over 200 pages and was an incredibly quick read that I completed in one sitting. This was a fabulous story that set the groundwork for what promises to be an intriguing series. I decided to read this story in order to prepare for my review for Face Off, which I received from NetGalley. I wanted to read this entire series to-date to prepare to read that book. I am really glad that I did because I was really able to get to know the primary protagonists in this series.

Hanover House is not yet in operation in this story. I am eager to continue on and discover how Evelyn will learn about the minds of the psychopaths while also hoping for Jasper to be caught before he kills any more women and finally getting to Evelyn.