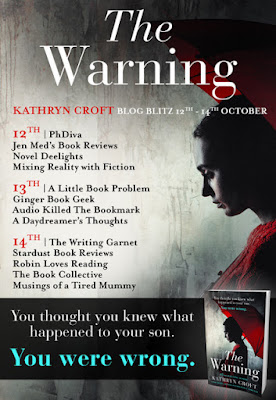 Today I am part of the Blog Blitz for The Warning by Kathryn Croft.

My little boy’s room was empty, his bed neatly made. Alarm bells should have rung immediately. Then the knock on the door came. All I remember is a thick fog wrapping itself tightly around me. This couldn’t be happening to us.

Three years ago, nurse Zoe's son Ethan was found drowned in a muddy river by their home, along with his best friend Josh. With no witnesses, their deaths were ruled a tragic accident.

Heartbroken, Zoe and her family, move away from her home. They’re just beginning to get back to some kind of normality, when, out of the blue, Zoe receives an anonymous email:

You need to find out the truth about what happened to your son. Don’t let this rest. Don’t believe the lie.

Shaken, Zoe starts an obsessive hunt for the truth. But why is her husband so reluctant to help? And why is Josh’s mother so determined not to believe her?

An absolutely unputdownable psychological thriller about a mother’s desperate search for the truth. Fans of The Girl on the Train, and Gone Girl will be hooked from the very first page. 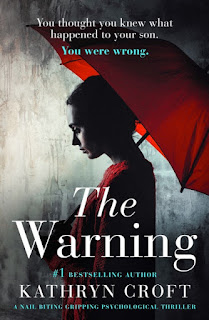 Having taken three years to cope with the loss of her son, Ethan Monaghan, Zoe‘s world is turned upside down yet again, due to this one email: "You need to find out the truth about what happened to your son down by the river three years ago. Don’t let this rest. Don’t believe the lie. It was no accident."

Needless to say, Zoe becomes quite desperate and is determined to find out who sent it. Ethan and his friend Josh were 14 years old when they tragically died. Other things she wonders: Why three years later? It was an accident, wasn't it? After several more emails come her way, she realizes that someone is deliberately targeting her. After all, her son died along with his best friend Josh, yet Josh's mother has never gotten one single email.

Zoe asks a lot of questions. She repeatedly questions Josh's mother, as well as some of their friends. Meanwhile, many complicated situations come to light. There are things about Josh's parents that truly disturb Zoe. Then her relationship between her husband and her other son Harley come into play.

This story is mainly told from Zoe's first-person perspective, so much so that I was truly absorbed. I felt her pain on many levels. Her roles as a mother and a wife were truly very touching. Other chapters also include other viewpoints. The story is also peppered with the creepy thoughts of an untold individual. Who this person is and how they are connected with the death of the two boys remained ever present in my mind.

Then there were several twists and turns. They mostly came in the form of the continued emails. So very chilling. There is also a shocking change of events that might be just enough to destroy Zoe forever. Quite naturally, I flew through the pages. As a reader, I was more than eager to know what really happened to those boys and what would happen to Zoe in her personal life. The other characters in the story, Jake, Harley, Roberta and Adrian, were equally compelling, even if there were ones that I did not like.

The story all came together. The Warning is truly an exceptional read. I was in no way able to guess who penned the notes. But, when I got to the end, boy was I shocked! Here you have a story that began as tragic, so we knew going in that there it was certainly very unlikely to have any sort of a happy ending, but the conclusion! Let's just say that it was worth the read, because Kathryn Croft took readers down what may seem like rabbit trails only to present us with more than one surprising finality. Well done. I highly recommend this book to any lover of psychological thrillers.

I checked Goodreads and was delighted to see that Ms. Croft has written several other books, which seem like they are also psychological thrillers, which, by far, is my favorite genre. I will most certainly be putting her backlist in my TBR and will be following her for future titles. 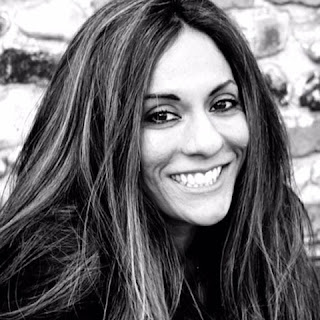 Kathryn Croft is the bestselling author of six psychological thrillers, and to date has sold over one million copies of her books. The Girl With No Past spent over four weeks at number one in the Amazon UK chart and her other novels, Behind Closed Doors, The Stranger Within and The Girl You Lost all reached number one in the psychological thriller charts.

Her seventh psychological thriller is due to be released in October 2018.

Having always been an avid reader, Kathryn believes in the power of words to entertain, teach and transform lives. She is also a firm believer in following your dreams and says anything is possible if you work hard enough and never give up!