Review: Someone to Love 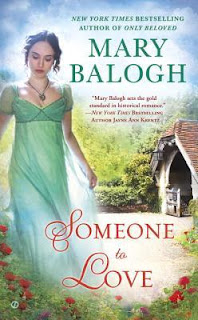 Humphrey Westcott, Earl of Riverdale, has died, leaving behind a fortune that will forever alter the lives of everyone in his family—including the daughter no one knew he had...

Anna Snow grew up in an orphanage in Bath knowing nothing of the family she came from. Now she discovers that the late Earl of Riverdale was her father and that she has inherited his fortune. She is also overjoyed to learn she has siblings. However, they want nothing to do with her or her attempts to share her new wealth. But the new earl’s guardian is interested in Anna…

Avery Archer, Duke of Netherby, keeps others at a distance. Yet something prompts him to aid Anna in her transition from orphan to lady. As London society and her newfound relatives threaten to overwhelm Anna, Avery steps in to rescue her and finds himself vulnerable to feelings and desires he has hidden so well and for so long.

At the age of 25, Anna Snow learns that she is the daughter of the late Humphrey Westcott, Earl of Riverdale. Anna grew up in an orphanage since the age of four. It had always been a mystery to her that she had an anonymous supporter during those years. Now, imagine her shock when, now a teacher, she learns that she has just inherited his fortune. She also learns that she has several siblings. However, they are illegitimate with no claim to her newfound wealth. One of the first thing that Anna wants to do is to share her wealth with them. They want no part of her, or her money.

Avery Archer is the Duke of Netherby. He makes the decision to bring Anna up to snuff in all the ways required to adjust to her new life. One glance and Avery is smitten, but his intentions are indeed honorable.

Anna very aware of Avery. He is average height, slight of build, flamboyant almost. He is a beautiful man. He may not be the stuff of romance novels, but Anna just can't get him out of her mind. Especially with so much on her plate, her growing feelings for Avery are rather confusing.

This book is rich with characters. Too many, sometimes. However, I often wonder when picking up an ongoing series if the cast of characters is in part set up for future stories. Once I made all of the connections, however, I was able to enjoy the story. One of the things that I found easy to like was how I was drawn to Avery. I kept trying to picture his looks, how he could be so attractive without being effeminate. I love that the author chose to write such a different hero. I also thoroughly enjoyed Anna. She was so torn. Her life was just fine, but now she has an entirely new role to fill, while at the same time dealing with raw emotions. Very well done.

The other criticism I have were the letters than Anna wrote to her friend. They often repeated everything that had just occurred, so after a while I skimmed passed the letters. I just wanted to go ahead with the story.

Mary Balogh has written several series. However, I am new to her work. Someone to Love is the first in the Westcott series. There are several books to follow, with the latest book due at the end of November, Someone to Trust. As I will be reviewing that title for First to Read, I will be reading this series in its entirety.