Today is my day on the Blog Tour for Murder in Mind by Faith Martin.

Seventy-five-year-old Sylvia Perkins was found battered to death in her home in 2010, the murder weapon is suspected to be a fire poker.

Her grandson Robbie inherited everything, but he can’t be placed at the scene of the crime.

WHO KILLED THIS HARMLESS OLD WOMAN AND WHY? AND WHAT SECRETS WAS SHE HIDING?

Hillary has a new boss and a baffling cold case to contend with, not to mention a marriage proposal to consider.

She wasn’t sure she wanted to go back. But solving crimes is irresistible for Hillary Greene.

DI Hillary Greene
An attractive, single woman nearing the landmark age of fifty, Hillary Greene was a police officer of many years’ experience (earning the rank of DI) and came up through the ranks. Consequently, she knew how the system worked, and was always fiercely loyal to the force without being blinkered to its faults. Forced to retire early through no fault of her own, she has now returned to the force as a civilian consultant on cold cases. 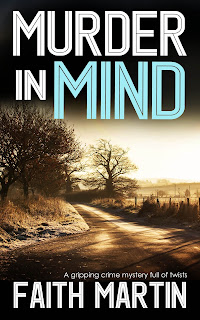 Hillary Greene is back on the scene working on another cold case. She spent several years on the police force as a detective. Two years previously, Hillary took early retirement. Being tired of boredom, she returned and is now working with the Crime Review Team, with a small team of officers. Hillary is invaluable because while in her previous job as a DI she was second to none, with an exceptionally high solve rate.

Hillary's newest case is that of seventy-five-year-old Sylvia Perkins who was found killed in her home in 2010. Sylvia had a reputation of sorts as she was quite popular with the older gentleman. So there is no shortage of suspects. However, the primary suspect is her grandson Robbie who has inherited everything. However he cannot be placed at the scene of the crime so the investigation takes Hillary and her team on a lot of turns.

Meanwhile Hillary is a bit distracted because she recently received a marriage proposal from Superintendent Steven Crayle, who was formally her boss. She is not so sure that she wants to get married again and takes a lot of time to make her decision.

In Murder at Midnight, book 15 in this series, readers were left wondering about one of her team members, Jake Barnes. His actions are rather suspicious and may even bring danger to Hillary. Fortunately, actions he took previously have not gone unnoticed especially since he does not fit well with the team. He is well-to-do and certainly does not need the civilian job. Also he was caught snooping on Hillary‘s computer. Hillary must also contend with a new boss, Roland Sale.

Murder in Mind is an exceptionally quick read. It is a great crime mystery where we get to see Hillary using her exceptional wits to solve this heinous crime. Character development is done quite well in this book. As the book was set some time ago, a lot of footwork and interviews were necessary for this murder to be solved. It was done quite well and the story flowed quickly. However, just as in each book in the series, we are left with unanswered questions. No doubt the final book in the series will wrap things up.

Many thanks to Joffe books and to NetGalley for this ARC for review in exchange for my honest opinion.