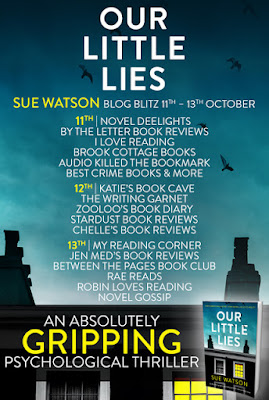 Today I am pleased to be a part of the Blog Tour for Our Little Lies by Sue Watson.

Marianne has a life others dream of. A beautiful townhouse on the best street in the neighbourhood. Three bright children who are her pride and joy.

Sometimes her past still hurts: losing her mother, growing up in foster care. But her husband Simon is always there. A successful surgeon, he’s the envy of every woman they’ve ever met. Flowers, gifts, trips to France – nothing is too good for his family.

Then Simon says another woman’s name. The way he lingers on it, Caroline, gives Marianne a shudder of suspicion, but she knows she can’t entertain this flash of paranoia.

In the old days, she’d have distracted herself at work, but Marianne left her glamorous career behind when she got married. She’d speak to a friend, but she’s too busy with her children and besides, Simon doesn’t approve of the few she has left.

It’s almost by accident that Marianne begins to learn more about Caroline. But once she starts, she can’t stop. Because what she finds makes her wonder whether the question she should be asking is not ‘should she be jealous’, but... ‘should she be scared’?


Fans of The Girl on the Train and I Let You Go looking for a dark, gripping psychological thriller, with a final twist that will put their jaw on the floor, will love Our Little Lies. 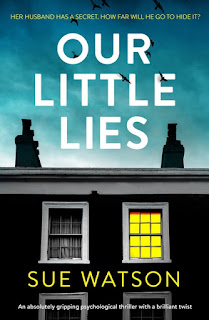 Marianne is a stay-at-home wife to a brilliant heart surgeon named Simon. They have three children. Inasmuch as Marianne once had a successful career, she relishes her role as a wife and mother. On the surface. Deep down, she is a battered woman who is experiencing problems on many levels. Simon is a controlling husband, and that is putting it mildly. He controls her so much that his thoughts become her thoughts. Almost to the degree that she actually thinks LIKE him, thus doubting and even forgetting her own original thoughts.

Our Little Lies made me think of the movie Gaslight, with Charles Boyer and Ingrid Bergman. In the film, the husband systematically tries to drive the wife out of her mind. As a matter of fact, the term “gaslighting” has come to mean to psychologically manipulate someone into believing that they have lost their mind. So intrigued, I stopped reading the book to watch the 1944 classic! Then I stayed up immediately afterward and read the book through.

There are obvious and numerous differences, however. The primary difference is that there is another woman embroiled here. You see, Marianne has spent ten years married to Simon. She has believed herself to be leading the ideal life. Her life is enough. She should be happy in her life. But as the story evolves we see that she is anything but a happy woman. She has spent years devoted to her husband and family. The problem is that he has made her doubt herself time and again.  She often wonders whether or not it is illness, herself, medication, or could it be something even worse. What is that worst? There is another woman, Caroline, a fellow surgeon of Simon’s. Marianne just knows that she is not imagining that her husband is having an affair with Caroline.

I want to mention the point in the story where I begin to sense a strong connection to the film. There was the occasion when Simon arrived home from work before Marianne and the children got home from after-school activities. Dinner was not ready and she was quite alarmed that he might be angry. She reminds him that she didn’t expect him that early because he had surgery scheduled for the day. He pretty much says:  Really? One word, and he then has her believing that maybe he didn’t tell her that he had surgery. That is just one example of how he has her doubting she heard him correctly, even going so far as to gently driving the doubt home.

Can I stop to say at this point that I really did not like the smug, charming, irresistible Simon? He called her paranoid. He undermined her in front of the children. How did I feel about Marianne? I felt very drawn to her, as she was emotionally broken, living with apparent paranoia that she was unable to control.

At some point Marianne meets Caroline, and when this happens she is absolutely certain that her husband is not being faithful to her. Maybe it is true that her entire life has been a lie. "As Simon often says, ‘I’ve given you everything, but everything isn’t good enough for you, is it Marianne?’"

Well, the tables turn, and I just have to quote from the book again briefly - “Welcome to my world, Simon. #GaslightingForGirls.” She wakes up. But, is it too late? What ensues is a thrilling plan of action that will change the very fabric of Marianne’s life.

I was captivated by this book! Although it was very difficult to witness the awful abuse that Marianne had to endure, I just kept replaying the movie in my mind. I was on the edge of my seat just waiting for the “A Ha” moment. Oh, it had to come? But would come before it was too late?

As riveting as Our Little Lies was, the true shocker was the twist at the end. While this psychological thriller is my first read by Sue Watson, it will certainly not be the last. Very well done.

Sue Watson was a journalist then TV Producer at the BBC until she wrote her first book and was hooked.

She's now written thirteen novels - many involving cake - and her books have been translated into Italian, German and Portuguese. Originally from Manchester, Sue now lives with her husband and teenage daughter in Worcestershire where much of her day is spent procrastinating while eating cake (for research purposes), and watching 'My 600lb Life,' on the sofa.

Sue explored the darker side of life for her latest book 'Our Little Lies,' a dark, psychological thriller completely devoid of cake. She's hoping this change in direction will be reflected on the weighing scales.

Sue would love to meet you on FaceBook at https://www.facebook.com/suewatsonbooks