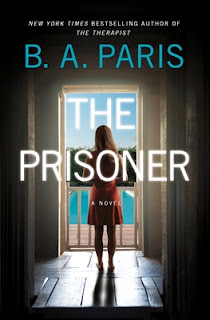 Title:   The Prisoner
Author:  B. A. Paris
Publisher:  St. Martin's Press
Genre:   Psychological Thriller
Format:  Kindle ad Audiobook ARC
Narrator:  Georgia Maguire
Length:  8 hrs 41 mins
No. of Pages:   304
Date of Publication:   November 1, 2022
My Rating:    4 Stars
DESCRIPTION:
With Behind Closed Doors, B.A. Paris takes the psychological thriller to shocking new heights. Now she'll hold you captive with this stunning new thriller about one woman wed into a family with deadly intentions.
Amelie has always been a survivor, from losing her parents as a child in Paris to making it on her own in London. As she builds a life for herself, she is swept up into a glamorous lifestyle where she married the handsome billionaire Jed Hawthorne.
But then, Amelie wakes up in a pitch-black room, not knowing where she is. Why has she been taken? Who are her mysterious captors? And why does she soon feel safer here, imprisoned, than she had begun to feel with her husband Jed?
Link to purchase the book
MY THOUGHTS:
Amelie marries Ned for auspicious reasons. Little did she know that becoming captive as a kidnap victim fared better than the life she was living with Ned. In fact, Amelie agreed to just a 30-day marriage, with a settlement once that time frame has passed. However, neither Amelia nor Ned are able to live the days of their agreement when they both become part of a scheme that neither of them understands.
Amelie's life before being married to the billionaire was full of troubles. She thought she knew troubles, but now they are of an entirely different sort. The fact that Ned was also kidnapped is something that is confusing to both of them. With a slow-burning mystery, readers see what circumstances brought Amelie and Ned together. It was at the point Ned lost a few points in my books because of something about his past. In fact, it was Ned's past as to why he wanted to marry Amelie and for such a short period of time.
With past and present colliding more than once in this intriguing story by B. A. Paris it was impossible not to feel for Amelie and all that she experienced in the pages of this book. The question as to whether either Amelie or Ned would be released was more than enough to keep me invested in this story.
Many thanks to St. Martin's Press and to NetGalley for this ARC for review. This is my honest opinion.
ABOUT THE AUTHOR: 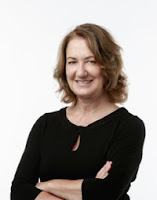 B A Paris grew up in England but has spent most of her adult life in France. She has worked both in finance and as a teacher and has five daughters. Behind Closed Doors is her first novel.
twitter