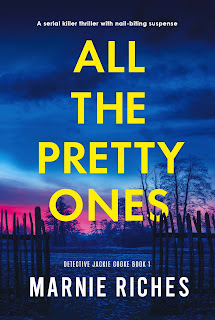 Title:  All the Pretty Ones
Author:  Marnie Riches
Series:  Detective Jackie Cooke #1
Publisher:  Bookouture
Genre:   Mystery & Thrillers
Format:  Kindle
No. of Pages:   338
Date of Publication:   June 7, 2022
My Rating:  4 Stars
DESCRIPTION:
The girl is sitting upright, her dark brown hair arranged over her shoulders and her blue, blue eyes staring into the distance. She looks almost peaceful. But her gaze is vacant, and her skin is cold…

Seventeen-year-old Chloe Smedley walks out of the school gates and spots the person waiting for her across the road. She waves excitedly, hurrying towards them…

A week later, Detective Jackie Cooke is first on the scene when Chloe’s body is found. Her own little brother vanished as a child, and while Jackie could not save him, she has vowed to find justice for every other victim since. But as she looks at the way Chloe has been left, a chill in her gut tells her this case is bigger – and darker – than any she has known. She lays a protective hand on the baby in her belly, and vows to make the world a safer place for her children.

Then another body is found, posed in the same strange way, and Jackie feels certain she is hunting a monster who preys on the vulnerable. Her team won’t listen, but Jackie is convinced these victims are all connected – targeted for some terrible purpose.

But when she returns home soon after to find a multi-coloured friendship bracelet on her kitchen counter, her blood runs cold. It’s the same one her brother was wearing the last time she saw him, nearly thirty years before.

Determined to follow every clue and prevent another innocent life being lost, Jackie realises that only digging into her own past will let her catch the killer… not knowing that he is already watching her every move…

An absolutely gripping crime thriller that will keep you racing through the pages. Fans of Kendra Elliott, Rachel McLean and Val McDermid will love All the Pretty Ones.
Link to purchase the book
MY THOUGHTS:
Detective Jackie Cooke is beside herself with her most recent case. Seventeen-year-old Chloe Smedley was found dead and the first thing that Jackie recognized is that young Chloe had down syndrome. This brings to mind the loss of her little brother who disappeared as a child, also someone with down syndrome. This gives Jackie even more incentive to find who killed Chloe.
As disturbing as Chloe‘s body was discovered, when another victim is discovered in a very similar manner, Jackie realizes that she is looking for someone rather heinous. In fact, while this first book is narrated from Jackie’s point of view, the killer, dubbed “The Monster”, also expresses their opinion, even to the point of watching Jackie on the sidelines and often at crime scenes.
The crime scenes are bad enough, but when something eerie shows up in her home, Jackie strongly feels that the current case is connected to the loss of her brother all those years ago. Jackie’s hands are full on the homefront as well. She has twin nine-year-old boys and is in her third trimester of pregnancy. Furthermore, things with her husband are not going well and her mother, living downstairs from her, is bitter and condescending.
Jackie is determined to catch this killer before yet another body is found, navigating difficult waters all while not realizing that she herself is in danger. All the Pretty Ones is a compelling read and a fabulous start to this series by Marnie Riches.
**Featured Blog Tour Post** 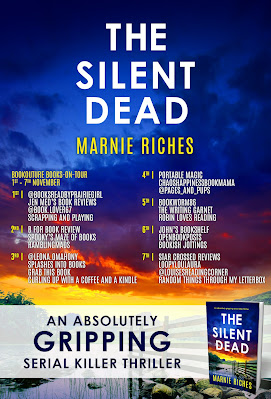 DESCRIPTION:
She was lying as if asleep on the wooden kitchen floor, beneath the fridge covered with a child’s colourful crayon drawings. But her frozen expression showed she would never wake again…

When Detective Jackie Cooke is called out to the scene, she’s expecting a routine check. The bottle of pills on the kitchen table, next to the note with the single word SORRY written in a shaky hand, make it seem obvious what’s happened. But Jackie is shocked when she recognises her old schoolfriend Claire – and she is convinced Claire would never take her own life.

Determined to dig deeper, Jackie soon discovers evidence that proves her right: a roll of notes has been thrust down the victim’s throat. And when she finds another woman killed in the same way, she realises someone may be targeting lonely single mothers. As Jackie talks to Claire’s distraught children, one of them too young to understand his mummy is never coming home, she vows to find answers.

Both victims were in touch with someone calling himself Nice Guy – could he be the killer? Pursuing every clue, Jackie is sure she’s found a match in dead-eyed Tyler, part of a dark world of men intent on silencing women for daring to reject them. But just as she makes the arrest, another single mother is found dead – a woman who never dated at all.

Forced to re-evaluate every lead she has, with her boss pressuring her to make a case against the obvious suspect, Jackie knows she is running out of time before another innocent woman is murdered. And, as a single mother herself, she cannot help but wonder if she is in the killer’s sights. Can she uncover his true motivation and put an end to his deadly game… or will he find her first?

A completely unputdownable crime thriller that will have you reading long into the night. Perfect for fans of Kendra Elliott, Rachel McLean and Val McDermid.
BUY LINKS:
Amazon: https://geni.us/B0B3DQDSJ4social

Listen to a sample here:
https://soundcloud.com/bookouture/the-silent-dead-by-marnie-riches-narrated-by-helen-duff 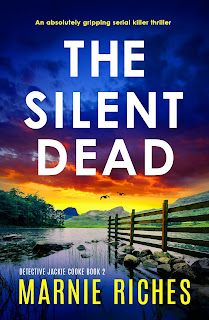 Title:   The Silent Dead
Author:  Marnie Riches
Series:  Detective Jackie Cooke #2
Publisher:  Bookouture
Genre:   Mystery & Thrillers
Format:  Kindle
No. of Pages:   338
Date of Publication:   November 1, 2022
My Rating:  4 Stars
MY THOUGHTS:
When the body of a single mother is discovered with a single word note, suicide might be the apparent cause. The discovery of the woman’s body is even more shocking when Detective Jackie Cooke recognizes that it is a friend of hers from school that she has not seen in decades. Oddly enough, the victim has a telltale sign that proves that this was not a case of suicide. This is especially proven when a second body is discovered in a very similar manner. The second victim is also a single mother. This makes it clear that this killer is targeting single mothers, and Jackie is determined to bring this killer to justice before yet another body is discovered.
Jackie soon makes the connection between the two women, and the brings her just a bit closer to discovering the killer. Sadly, before she can hone in on the killer, yet another body is discovered. Jackie is carrying a lot with this current case. Friction with her boss makes things difficult, and things on the homefront are not doing so great either. She is now a single mother with twin ten-year-old boys and a very young infant daughter. She is forced to balance things at home while trying to find out who is killing these women. Little does Jackie know that she herself is in the killer’s sites. With more than one potential suspect, Jackie finds herself rather overwhelmed with the case, all while navigating difficulties at home.
This book brings up something that I have seen in a previous book, and that is incels, and this is how Jackie tries to narrow down who the killer is. I love this book because Jackie is very real, her cases are rather complex and her relationship with her family is difficult at best. She is a hard worker who really cares about the victims and works very hard to bring these killers to justice. While Marnie Riches was new to me with the first book in the series, I am definitely dedicated to read anything by her going forward. She writes with great skill and fabulous character development making this book a very compelling read. I love reading a book where a dedicated police officer successfully balances their family life with their work. I am very much looking forward to the third book in the series.
Many thanks to Bookouture and to NetGalley for this ARC for review. This is my honest opinion.
Please enjoy my YouTube video review -
ABOUT THE AUTHOR:

Marnie Riches grew up on a rough estate in north Manchester. Exchanging the spires of nearby Strangeways prison for those of Cambridge University, she gained a Masters in German & Dutch. She has been a punk, a trainee rock star, a pretend artist and professional fundraiser.
Her best-selling, award-winning George McKenzie crime thrillers were inspired by her own time spent in The Netherlands. Dubbed the Martina Cole of the North, she has also authored a series about Manchester’s notorious gangland as well as two books in a mini-series featuring quirky northern PI Bev Saunders.
Detective Jackson Cooke is Marnie’s latest heroine to root for, as she hunts down one of the most brutal killers the north west has ever seen at devastating personal cost.
When she isn’t writing gritty, twisty crime thrillers, Marnie also regularly appears on BBC Radio Manchester, commenting on social media trends and discussing the world of crime fiction. She is a Royal Literary Fund Fellow at Salford University’s Doctoral School and a tutor for the Faber Novel Writing Course.
https://marnieriches.com/
https://www.facebook.com/MarnieRichesAuthor
https://www.instagram.com/marnie_riches/
https://twitter.com/Marnie_Riches
Sign up to be the first to hear about new releases from Marnie Riches here: https://www.bookouture.com/marnie-riches