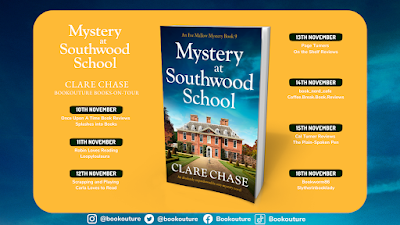 Eve Mallow’s going back to school! But when a former student is murdered, Eve must discover who taught her a deadly lesson…Eve Mallow is delighted when she’s asked to cater Founders’ Day at Southwood School. It’s the best – and most secretive – school for miles around, and Eve can’t wait to see what it’s really like. But when she arrives, the atmosphere is far from scholarly. Natalie Somerson, ex-pupil and professional gossip, is the guest of honour, but nobody seems to want her there… especially when her speech stirs up an old scandal about a secret love affair. So why was she invited?The next morning, Natalie is found dead in a locked attic room. To make matters worse, Eve’s boyfriend Robin becomes the police’s prime suspect. Determined to prove his innocence, Eve starts to investigate everyone with a stake in the school. Is it the prudish principal, worried about Natalie’s influence? Her former teacher, whose life Natalie made miserable? Or the head girl, who seemed to hate Natalie one day and adore her the next?When strange letters arrive at the school and Eve finds a bottle of Natalie’s perfume in the most unexpected place, she senses time is running out to save Robin’s good name. Eve had better study her suspects and unmask the real killer… before they give her a fatal mark!An utterly delightful and page-turning English cozy mystery, perfect for fans of Frances Evesham, J.R. Ellis and Agatha Christie. 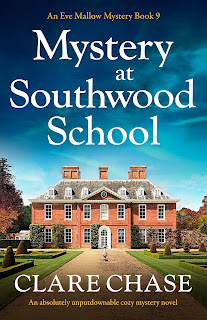 Title:   Mystery at Southwood School
Author:  Clare Chase
Series:  Eve Mallow #9
Publisher:  Bookouture
Genre:   Cozy Mystery
Format:  Kindke ARC
No. of Pages:   269
Date of Publication:   November 10, 2022
My Rating:   5 Stars
Eve Mallow is about to perform double duties yet again. Catering at the Southwood School for the Founder’s Day event is not the only thing that will keep Eve busy. In fact, when a former student is murdered, Eve puts on her amateur sleuth hat and is determined to find the murderer. Her secret boyfriend Robin is working as a temporary gardener at the school, and after it is learned that he had briefly talked to the murder victim, Robin becomes the chief suspect. This really increases Eve‘s determination to figure out what happened because she is certain that Robin had nothing to do with the murder.
Eve begins talking to as many people as she possibly can, discovering that the victim was not well liked at all, almost from the first day that she originally started at the school. Could it be the school principal, a former teacher, or perhaps another former student? Time is definitely of the essence to find the killer.
This is an excellent installment to a delightful series. Each time Eve proves more than adept at finding the killer as each story changes. Eve’s having a personal stake in this particular murder makes this book even more intriguing.
Robin‘s story has always been a mystery of its own in this series. This particular book lays into that a bit more which will no doubt leave  lovers of this series with a sense of satisfaction regarding Robin. As always, Eve always manages to find herself in the most precarious situations. This book an easy read because I felt like I had to know who is behind everything in this book just as Eve did. Clare Chase writes this series with flair, making this book and every previous book in this series truly worthy reads. I am really excited for book ten in this fabulous series, which is Mystery at Fairfield Castle.
Many thanks to Bookouture and to NetGalley for this ARC for review. This is my honest opinion.
Please also enjoy my YouTube video review -
ABOUT THE AUTHOR:

Clare Chase writes classic mysteries. Her aim is to take readers away from it all via some armchair sleuthing in atmospheric locations.

Her debut novel was shortlisted for Novelicious’s Undiscovered Award, as well as an EPIC award post-publication, and was chosen as a Debut of the Month by LoveReading. Murder on the Marshes (Tara Thorpe 1) was shortlisted for an International Thriller Writers award.

Like her heroines, Clare is fascinated by people and what makes them tick. Before becoming a full-time writer, she worked in settings as diverse as Littlehey Prison and the University of Cambridge, in her home city. She’s lived everywhere from the house of a lord to a slug-infested flat and finds the mid-terrace she currently occupies a good happy medium.