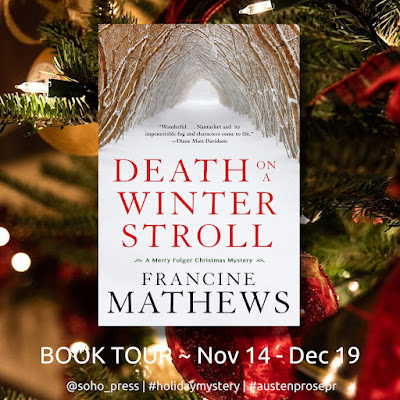 No-nonsense Nantucket detective Merry Folger grapples with the aftermath of the COVID-19 pandemic and two murders as the island is overtaken by Hollywood stars and DC suits.

Nantucket Police Chief Meredith Folger is acutely conscious of the stress COVID-19 has placed on the community she loves. Although the island has proved a refuge for many during the pandemic, the cost to Nantucket has been high. Merry hopes that the Christmas Stroll, one of Nantucket’s favorite traditions, in which Main Street is transformed into a winter wonderland, will lift the island’s spirits. But the arrival of a large-scale TV production, and the Secretary of State and her family, complicates matters significantly.

The TV shoot is plagued with problems from within, as a shady, power-hungry producer clashes with strong-willed actors. Across Nantucket, the Secretary’s troubled stepson keeps shaking off his security detail to visit a dilapidated house near conservation land, where an intriguing recluse guards secrets of her own. With all parties overly conscious of spending too much time in the public eye and secrets swirling around both camps, it is difficult to parse what behavior is suspicious or not—until the bodies turn up.

Now, it’s up to Merry and Detective Howie Seitz to find a connection between two seemingly unconnected murders and catch the killer. But when everyone has a motive, and half of the suspects are politicians and actors, how can Merry and Howie tell fact from fiction?

This latest installment in critically acclaimed author Francine Mathews’ Merry Folger series is an immersive escape to festive Nantucket, a poignant exploration of grief as a result of parental absence, and a delicious new mystery to keep you guessing.

• “This fast-moving mystery packs in a lot, but never too much, and will work for fans of coming-of-age stories, police procedurals, and romance.” —First Clue
• “Fresh, well-wrought prose brings the setting of Nantucket to life. Mathews consistently entertains.” —Publishers Weekly
• “Christmas and death come to Nantucket . . . Plenty of fascinating characters and myriad motives make for an exciting read.” —Kirkus Reviews
• “Mathews consistently places relationships at the forefront of her mysteries, and Merry's unique blend of tenacity and humanity makes her a heroine to root for.”—USA Today bestselling author Karen Odden, author of the Inspector Corravan mysteries 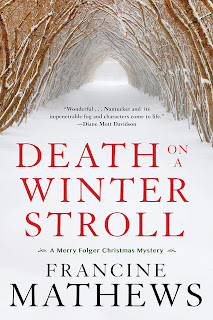 Title:   Death on a Winter Stroll
Author:  Francine Matthews
Series:  A Merry Folger Nantucket Mystery #7
Publisher:  Soho Crime
Genre:   Mystery & Thrillers
Format:  Kindle ARC
No. of Pages:   289
Date of Publication:   November 1, 2022
My Rating:   4 Stars
Police Chief Merry Folger’s life and work on Nantucket is anything but quiet. Her town, like everywhere around the world, is bouncing back from the pandemic, and they are not quite prepared for the newest influx of island visitors.
Not only is there a large crowd from Hollywood filming on the island, the U. S. Secretary of State and his wife and difficult stepson are there as well. Quarantine wasn’t easy, and with all the new people suddenly flocking to the island, permanent residents are not happy. To really complicate things, the female lead in the Hollywood production is murdered.
Merry’s job of discovering the murderer is not easy, as the list of suspects is long. Howie Seitz, one of Merry’s detectives, is leading the investigation, leaving Merry to another matter. When a woman is found dead who had been living in what was thought to be an abandoned house, Merry is determined to find out who she was and how she came to be living in the house. More than that, her manner of death is concerning to Merry.
Although this is the seventh book in a series, I had not read the previous titles. Although it took a few pages to get to know Merry, the story flowed easily from there. Along with Merry and Howie as excellent protagonists, I enjoyed the two younger people in the story as well. They were the murdered lady’s son Ansel and Winter, the daughter of the lead actor in the production. They had deeper problems that were explored in this mystery, all while the investigations into the two deaths that were likely connected went on. Factoring in the effects COVID-19 had on so many lives gave another layer to this story.
This intriguing story definitely caught my attention as it was well executed as well as entertaining and left me guessing. I definitely am looking forward to book eight in the series, as well as finding time to read the previous titles.
Many thanks to Soho Books and to NetGalley for this ARC for review. This is my honest opinion.
Please enjoy my YouTube video review -

Francine Mathews was born in Binghamton, New York, the last of six girls. She attended Princeton and Stanford Universities, where she studied history, before going on to work as an intelligence analyst at the CIA. She wrote her first book in 1992 and left the Agency a year later. Since then, she has written thirty books, including six previous novels in the Merry Folger series (Death in the Off-Season, Death in Rough Water, Death in a Mood Indigo, Death in a Cold Hard Light, Death on Nantucket, and Death on Tuckernuck) as well as the nationally bestselling Being a Jane Austen mystery series, which she writes under the pen name Stephanie Barron. She lives and works in Denver, Colorado.