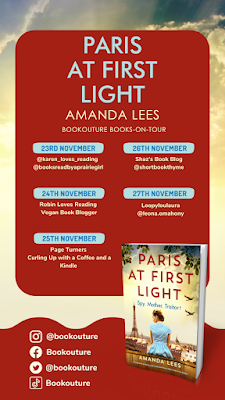 Paris, 1944: secret agent Juliette is on her most dangerous mission of the war so far. But then her children are kidnapped, and to get them back she may have to commit the ultimate betrayal – that of France itself…Four years ago, when France fell to the Nazis, Juliette made the ultimate sacrifice, leaving behind her two precious children to join the Resistance and defend her country. Now a spy in Paris, she must work with Captain Daniel Diaz – an American agent she’s taken an instant dislike to – on a dangerous mission to uncover a deadly Nazi plot.As the pair play their parts, Juliette begins to see another side to Daniel, and their feelings for each other start to grow. But just as love blossoms, Juliette receives a ransom note that changes everything. Someone in Paris knows who she is. And they’ve kidnapped her little son and daughter. The message is clear: betray your country, or you’ll never see your children alive again.Juliette has sworn a sacred oath to save France at all costs, but she could never sacrifice her children. So, against all the odds, she decides to attempt the impossible: rescue her children and continue her dangerous work fighting the Nazi threat.But as the mission forces Juliette and Daniel to the very brink, will they succeed on all fronts? And if not, will France pay the ultimate price, or will Juliette?A completely gripping and heart-wrenching historical novel about hope, betrayal and one mother’s limitless courage. Perfect for fans of The Alice Network, The Nightingale and My Name is Eva, this epic story will leave you breathless. 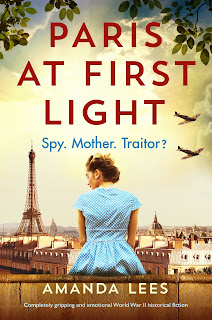 Title:   Paris at First Light
Author:  Amanda Lees
Series:  WW2 Resistance Series #2
Publisher:  Bookouture
Genre:   Historical Fiction
Format:  Kindle ARC
No. of Pages:   353
Date of Publication:   November 23, 2022
My Rating:   5 Stars
Juliette know danger, even to the point of leaving her two children in the care of their grandmother while she continues in the critical role she has played since joining the Resistance. Advanced in her role as a spy, she has no choice but to join forces with Captain Daniel Diaz, an American agent. The two must work together in order to uncover a plot being set in place by their enemy. While at first Juliette and Daniel are like oil and water, they both begin to develop strong feelings towards each other, even to the point where love begins to solidify their relationship.
Romance is not key to Juliette, especially when she receives news of the worst kind. Her children and mother are missing, even though they were being protected. Juliette’s role has been discovered and the kidnapping of those most precious to her leaves her with an ultimatum. If she does not turn traitor, her family will be lost to her forever. Save her children or save France. Determined to do both, Juliette plots a dangerous plan.
What an amazing story by Amanda Lees! Any mother could imagine Juliette’s heart breaking in a million pieces with her worry for the safety of her children. However, it is her courage. Her strength. Even her loyalty that proves her incredible character.
This powerful story was not an easy read. This was especially so when the reason behind the kidnapping led back to the horrific experiences Juliette had to deal with during her marriage. Now experiencing the worst kind of betrayal, Juliette must really dig deep to save those she loves. Meanwhile, any possible future with Daniel just might be lost forever.
For a read that will keep you turning pages until the very end, look no further than Paris at First Light. In fact, for a read just as impactful I highly recommend the first book in this incredible series, The Silence Before Dawn. Both of these fabulous stories show strong and fearless women who survive the odds while making the most difficult choices.
Many thanks to Bookouture and to NetGalley for this ARC for review. This is my honest opinion. 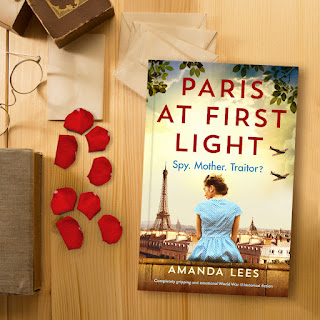 Amanda was born in Hong Kong and survived both a convent boarding school and a Jesuit boys’ school before being summarily ejected from the latter. She gets her thirst for adventure from her parents who met in the jungle in Borneo where her mother had set up a hospital and her father, a former Gurkha Intelligence officer and Oxford-educated spy, was probably up to no good.

She is the author of the bestselling satirical novels Selling Out and Secret Admirer (published by Pan) which have both received critical acclaim and have been translated into several languages. Her major YA thriller trilogy, Kumari, Goddess of Gotham, was written as a tribute to her mum, who died a couple of months before Amanda got the idea for a series which would reflect her own exotic childhood. Kumari was nominated for the Guardian Children’s Book Prize and the Doncaster Book Award. It featured as Redhouse Book Of The Month and Lovereading4kids Book Of The Month.

A broadcaster as well as an actress and novelist, Amanda appears regularly on BBC radio and LBC and was a contracted writer to the hit series Weekending on Radio 4. She researched and edited the leading directory for banks, The Banker’s Almanac, for Euromoney publications while also covering stories of shady dealings in the City for them. She has written for, or contributed to, The Evening Standard, The Times, New Woman, US Cosmopolitan, Bulgaria's Vagabond and Company Magazine as well as numerous online publications and has two non-fiction books published under a pen name.

Amanda has conducted a love coaching phone-in from the sofa of Richard & Judy and wooed the viewers on Channel 5 Live. She won an award at the Hungarian Gyor Film Festival for a short film she produced, a psychological thriller called Pros and Cons.

Her book, From Aconite to the Zodiac Killer: The Dictionary of Crime, was published by Robinson/Little Brown in July 2020 to excellent reviews. It was published in the US by Ulysses Press in May 2021. She has just completed the first in a romantic thriller series set at the end of WW2.
Author Social Media Links
Website: amandalees.com
Facebook:  https://www.facebook.com/AmandaLeesAuthor/
Twitter: https://twitter.com/amandalees
Bookouture Email Sign Up: https://www.bookouture.com/amanda-lees/