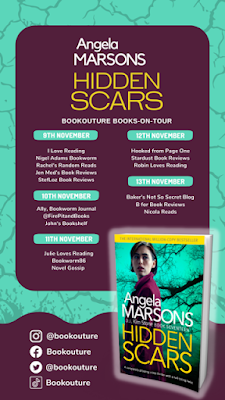 DESCRIPTION:
The boy’s dark hair shone in the bright lights. His lips seemed about to speak. But his body was cold and his blue eyes would never open again.

When a nineteen-year-old boy, Jamie Mills, is found hanging from a tree in a local park, his death is ruled a suicide. Detective Kim Stone’s instincts tell her something isn’t right. Why, when his mother is told, does she not break down in tears? And how could Jamie have climbed the tree with a recent injury?

Kim should be easing back into work gently after a harrowing case left her body and mind broken, but quickly taking charge of her team, Kim is shocked to learn that Jamie’s parents had sent him to a clinic to ‘cure’ him of his sexuality.

The clues to smashing open this disturbing case lie behind the old Victorian walls of the clinic, run by the Gardner family. They claim that patients come of their own accord and are free to leave at any time. But why are those who attended the clinic so afraid to speak of what happens there? And where did the faded restraint marks on Jamie’s wrists come from?

Kim makes a further chilling discovery – the head of the clinic, Celia Gardner, was sent there for conversion therapy when she was sixteen.

Then the body of a young woman is found dead by suffocation, her death also staged to look like a suicide.

Scarred from a previous case that nearly took her life, can Kim unearth the dark secrets within the Gardner family and is she strong enough to stop a terrifying killer silencing the clinic’s previous patients one by one?

A compulsive page-turner that will have your heart hammering in your chest and leave you absolutely reeling when you discover the explosive final twist. If you’re a fan of Karin Slaughter, Val McDermid, and Robert Dugoni, you’ll love Hidden Scars.
BUY LINKS:
AMZ: geni.us/B0B8DKKQR8social
Apple: ow.ly/s46x50Kbnfs
Kobo: ow.ly/TgTc50KbnI5
Google: ow.ly/pMls50KbnoS 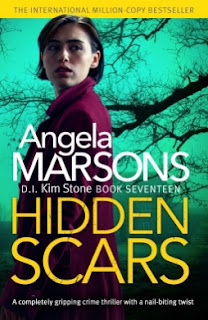 Title:   Hidden Scars
Author:  Angela Marsons
Series:  D. I. Kim Stone Book 17
Publisher:  Bookouture
Genre:   Mystery & Thrillers
Format:  Kindle ARC
No. of Pages:   352
Date of Publication:   November 9, 2022
My Rating:   5
MY THOUGHTS:
Angela Marsons hits the ground running with the next amazing installment in her incredibly successful Kim Stone series. Off the job for the past two months, Kim is a bit worse for wear as she is recovering from a brutal beating while on her last case. Nonetheless,  Kim is determined to jump right into things. Never one to take anything at face value, Kim notices two things about her unit's latest case: the dead body of nineteen-year-old Jamie Mills in the morgue, and an empty evidence board. Never one to get along with others easily, her temporary replacement Burns has left a bad taste in her mouth, so Kim intends on making tis investigation her own.
Kim is not going to just wipe away the death of the young man, even though it was ruled a suicide. As the investigation apparently went nowhere, Kim decides to look into Jamie's life. By so doing, she begins to see that something was terribly wrong. In short, Kim is certain that Jamie had been murdered and she is determined to find justice for him.
Glad to be back with her team, one of Kim's first actions is to visit Jamie's parents. This is when she learns of a clinic that specializes in a form of therapy with long-lasting results, and these are not always positive results.. The clinic boasts the ability to change the sexuality of "confused" individuals, and Jamie had been a patient there before his death. Kim is determined to turn over every rock she can to find out what really goes on in that clinic, and if Jamie's association with it had anything to do with his death.
Not at all liking what she is finding, Kim is further dismayed when another body is found, which also looked like a suicide at first glance. Kim now has no doubt the two cases are connected, and that these unfortunate deaths are related to that clinic. While the staff at the clinic seems upright and devoted to their patients, Kim's instincts tell her otherwise.
Not only did compassion for the victims break my heart, it was also hard to see the effect that this case had on Kim and her team. It was painful to watch Kim unravel the uncouth methods employed by the clinic's owners and staff. As the therapy at the clinic left many scars, Kim's determination to make sure no other young people lost their lives was paramount. This showed her concern on a very deep level, thus revealing yet another layer in this remarkable character. Meanwhile, the story had a few surprise twists along the way, as well as a pleasant surprise for long-time fans of this illustrious series.
I love how Ms. Marsons presents Kim with strikingly different cases with each book, making each book in this series fresh and smart each and every time. Seventeen books in and the series grows stronger with each one. For lovers of the compelling Kim Stone series, Hidden Scars is a must-read.
Many thanks to Bookouture and to NetGalley for this ARC for review. This is my honest opinion. 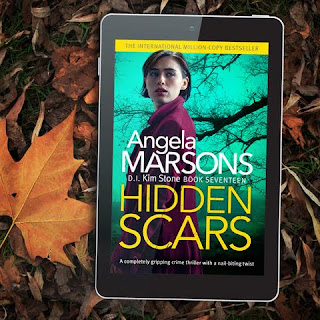 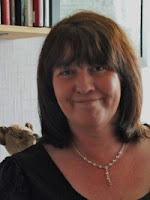 Angela Marsons is the Wall Street Journal and USA Today bestselling author of the DI Kim Stone series and her books have sold more than 5 million in 7 years.

She lives in Worcestershire with her partner and their 2 cheeky Golden Retrievers.

She first discovered her love of writing at Junior School when actual lessons came second to watching other people and quietly making up her own stories about them. Her report card invariably read "Angela would do well if she minded her own business as well as she minds other people's".

After years of writing relationship based stories (The Forgotten Woman and Dear Mother) Angela turned to Crime, fictionally speaking of course, and developed a character that refused to go away.

She is signed to Bookouture.com for a total of 28 books in the Kim Stone series and her books have been translated into more than 27 languages.