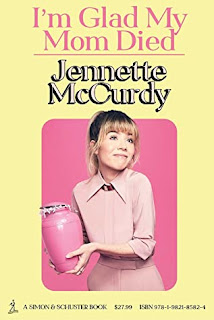 A heartbreaking and hilarious memoir by iCarly and Sam & Cat star Jennette McCurdy about her struggles as a former child actor—including eating disorders, addiction, and a complicated relationship with her overbearing mother—and how she retook control of her life.

Jennette McCurdy was six years old when she had her first acting audition. Her mother’s dream was for her only daughter to become a star, and Jennette would do anything to make her mother happy. So she went along with what Mom called “calorie restriction,” eating little and weighing herself five times a day. She endured extensive at-home makeovers while Mom chided, “Your eyelashes are invisible, okay? You think Dakota Fanning doesn’t tint hers?” She was even showered by Mom until age sixteen while sharing her diaries, email, and all her income.

In I’m Glad My Mom Died, Jennette recounts all this in unflinching detail—just as she chronicles what happens when the dream finally comes true. Cast in a new Nickelodeon series called iCarly, she is thrust into fame. Though Mom is ecstatic, emailing fan club moderators and getting on a first-name basis with the paparazzi (“Hi Gale!”), Jennette is riddled with anxiety, shame, and self-loathing, which manifest into eating disorders, addiction, and a series of unhealthy relationships. These issues only get worse when, soon after taking the lead in the iCarlyspinoff Sam & Cat alongside Ariana Grande, her mother dies of cancer. Finally, after discovering therapy and quitting acting, Jennette embarks on recovery and decides for the first time in her life what she really wants.

Told with refreshing candor and dark humor, I’m Glad My Mom Died is an inspiring story of resilience, independence, and the joy of shampooing your own hair.
Link to purchase the book
MY THOUGHTS:
Jennette McCurdy became quite a successful child Star, but this was not of her own making. No, it was all about her overbearing and extremely controlling mother. Her mother’s deplorable actions led young Jennette into a whirlwind of eating disorders, drug and alcohol abuse and more.
Most six-year-olds are excited about beginning first grade. Instead, Jennette’s energies are focused on acting audition after audition. Her mother is firmly in control, and all Jennette wants and can see is her mother’s happiness. So, she does her very best, but still manages to disappoint her mother. Thus begins a life of extreme control.
Some of the things Jennette’s mother forced on her was a very strict dietary intake, forceful beauty makeovers (She was still a young child!) and even being showered by her mother until she was sixteen years old! In fact, if it were not for her mother becoming ill and weak with cancer, these daily showers would have continued.
In her self-narrated audiobook, Jennette does not shy away from the extent of her mother’s controlling and abusive behavior towards her. Her mother’s attempts were indeed rewarded, as Jennette became cast in the Nickelodeon show iCarly. This might have made her mother happy, but not so for Jennette in fact, this is when her self-destructive behaviors began and grew by leaps and bounds.
Her mother was not the only toxic person in Jennette’s life, sadly enough. In fact, it was the show’s producer, Dan Schneider, a man who did not even earn his name being mentioned in her book, called only “the producer”, was someone who often made her feel very uncomfortable. After Jennette’s second major acting job won her a starring role on Sam & Cat, her mother lost her battle with cancer.
Sadly, this did not free Jennette from the effects of years of abuse. In fact, her self-destructive behavior continued. It wasn’t until she left the world of acting before she started to look at what she herself wanted in life, and thus began the world of recovery that would change her life and give her the control that she so deserved.
Readers just made wonder why the title, I’m Glad My Mom Died, was chosen by Jennette. No doubt, writing this book, and naming it this way, was part of the cathartic healing process she needed and truly deserved. It may have taken some time, but Jennette found healing and for that readers of this book and those aware of her story should be happy. More than writing this book, Jennette also narrated the incredibly touching audiobook. This  intensified the impact that this book had on me as a reader.
Quite naturally, this book comes with a bevy of content warnings. These would include child abuse, sexual assault, drug and alcohol abuse, gaslighting, parental death, etc.
Many thanks to Jennette McCurdy, Simon and Schuster and Libro.fm for this ARC for review. This is my honest opinion.
ABOUT THE AUTHOR:

Jennette McCurdy got her start in child acting, which by her late teen years had brought her success (she starred in Nickelodeon's hit show iCarly and her own spin-off, Sam & Cat). She went on to star in the Netflix series Between, and had a short-lived country music career with Capitol Records Nashville. Despite her outside success, McCurdy felt ashamed of 90% of her resume and ultimately unfulfilled, so she turned to alcohol, but since that didn't work, she quit acting and began pursuing writing/directing in 2017. She has written/directed a pilot and four short films. Her work has been featured in/on The Hollywood Reporter, Short of the Week, Florida Film Festival, Salute Your Shorts, and many more. She has written articles for Huffington Post and the Wall Street Journal. Her one-woman show “I’m Glad My Mom Died” had a sold-out run at Lyric Hyperion Theatre. She hosts a podcast called “Empty Inside”, where she speaks with guests about uncomfortable topics. (
web | twitter