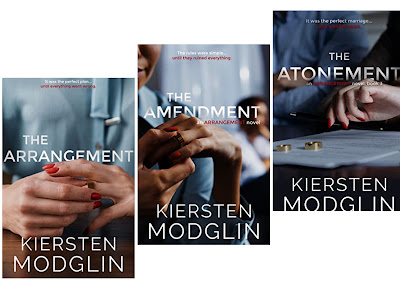 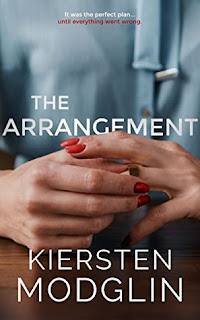 Title:   The Arrangement
Author:  Kiersten Modglin
Series:  The Arrangement #1
Genre:   Psychological Thriller
Format:  Audiobook
No. of Pages:   228
Date of Publication:   January 28, 2021
My Rating:   5 Stars
DESCRIPTION:
Ainsley Greenburg is a fixer.
It’s what she prides herself on.

So, when she realizes her marriage is at its breaking point, she makes a decision to repair it, no matter the cost. Approaching her husband to propose the arrangement is supposed to be the hard part, but Peter agrees to the salacious plan almost immediately.

The rules are simple:
They will each date someone new once a week.
They will never discuss what happens on the dates.

Soon, though, the rules are broken, turning terrible mistakes into unspeakable consequences.

When the only person they can count on to keep their darkest secret is each other, new questions and deceits surface. Can they truly trust the person they share a life with, or will the vicious lies that have mounted over the years destroy everything they’ve built?

Once, Peter and Ainsley vowed to stand together forever, but as they push boundaries of deception, suspicion, and temptation, each begins to wonder if ’til death do us part may come sooner than they’d intended.
Link to purchase the book
MY THOUGHTS:
Ainsley and Peter Greensburg’s marriage is falling apart. It has hit a dead end. However, always a fixer, Ainsley comes up with a plan. An Arrangement, in fact. Out of the ordinary and rather impractical to be sure. But Ainsley is determined to make their marriage survive. Simply put, on a weekly basis they can date others, with no limits, but they have to keep their experiences to themselves. Peter doesn't have the confidence that Ainsley does, but he agrees, although he i  rather uncomfortable with the idea. He had better go along with Ainsley’s plan, because she convinces him that this is necessary to save their floundering marriage.
This rather uncouth plan has a single motive. To spice up their marriage. However, someone breaks the rules. In a big way. In fact, they find themselves involved in an irreversible situation, further fracturing their delicate marriage and family life. This leads to further distrust and lies that grow exponentially.
Although the entire idea of cheating and open marriage are not my cup of tea, this book was very intriguing, especially as I knew would be listening to all three books in succession. This series worked for me because I just had to see how far Ainsley and Peter would go. Let’s just say that I was intrigued page after page, chapter after chapter, book after book. Kiersten Modglin has demonstrated true genius with this and the other two books in the series.
Since Ainsley and Peter started to implode even more than they already had, Ainsley had to think of something else. This left this book with a cliffhanger and had me turning directly to the second book in the series. 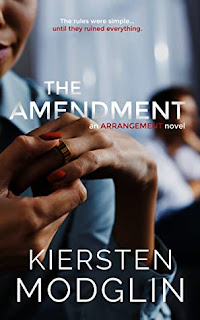 First, there was the arrangement.
A simple, yet salacious fix to the problems looming in their marriage.
But when things took a tragic turn, Peter’s and Ainsley’s lives quickly fell into disarray.

Now, their secrets have been exposed.
They know the truth—about each other and their marriage.
As they struggle to move on from their past and the damage they’ve caused, new problems begin to surface.

Someone they love is hiding a catastrophic secret. The fragile ground they stand on is starting to crumble. Their family is being torn apart at the seams. And, maybe worst of all, a threat from the past is lurking, ready to unveil the things they’d kill to keep hidden.

They thought the nightmare they’d made it through was over, but the worst is just beginning…

Once, they vowed to do anything to make their marriage work.
Now, that vow will push every boundary they have left.

In order to survive, they’ll need to completely trust each other.
But can they?
Last time they did, things went terribly wrong…
This time, it might be worse.
If there’s one thing that’s certain, their secrets are too big to let anyone walk away alive.
Link to purchase the book
MY THOUGHTS:
Well, Ainsley and Peter Greenburg tried something that did not work. Our fixer Ainsley found that her original Agreement proved lacking so it was time for an Amendment. This second book in the Agreement series picks right up where the first book left off.
This is not a book or series that should be read as a standalone or out of order. In order to fully follow this book, The Amendment, you really have to read The Agreement first.
Continuing with the alternating points of view of both Ainsley and Peter, the unchangeable circumstances that came as a result of their original plan have led them down a path of no return. Suffice it to say that secrets and lies made a bad situation worse. Much worse. As the secrets that had been deeply buried have come to the surface, both Ainsley and Peter have to find a way to live with the consequences of actions that have been taken. However, this is easier said than done, in fact, as mentioned, things become far worse.
One thing is apparently clear, especially as the couple are amending their original agreement - they step out into areas in which the implicit need for trust becomes something of extreme importance. Boundaries are tested beyond limits. All along, this is a couple that is doing everything that they are doing for the sake of love, saving a marriage and saving a family. However, the question is how far will they go and will what they engage in give them what they are so desperately seeking?
As with the first book in the series, this book leaves the reader with yet another cliffhanger, so since I already had The Atonement, I kept on going, as I just had to see how things would conclude. 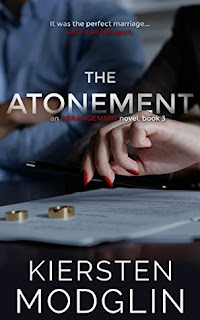 First, there was THE ARRANGEMENT—a scandalous story about Peter and Ainsley Greenburg’s attempt to fix their marriage, no matter the cost.
Next, came THE AMENDMENT—with their darkest secrets revealed, the couple set out in a treacherous attempt to repair what had been broken.
Now, Peter and Ainsley’s marriage will be put to one final test with THE ATONEMENT.

Ainsley Greenburg has always been a fixer.
But her latest attempt to repair her marriage left it more damaged than ever before.

Now, trapped in a vicious game of cat and mouse with the man she thought she knew, Ainsley must do what it takes to put out the fire their arrangement ignited.
But it won’t be that simple.

As Peter closes in on her, Ainsley finds herself driven down a path of paranoia and fear.
Her only hope lies in her ability to trust her instincts, but they’ve let her down before.
This time, there’s so much more at stake, and the secrets waiting to be revealed will change everything.

Whom can she trust when her world is up in flames?
One wrong decision could cost her everything she has left—her family, her home, and her life.

And, with a final showdown looming, Ainsley must decide what she's willing to let burn in order to survive.
As the blaze continues to heat up, it's only a matter of time before someone must atone for their sins.
Link to purchase the book
MY THOUGHTS:
The Agreement didn’t work. The Amendment made things even worse. Ainsley and Peter Greenburg appeared to have a common goal in the very beginning. They both wanted to save their marriage. To give it back the spark that it once had. To make their family a happy unit.
Now that all the secrets have been exposed, Ainsley finds that she has set an irreversible course in motion, leaving her in fear of Peter. This is going to be a case of who wins as there can only be one winner. As the second book in the series left with a cliffhanger, The Atonement starts off with a bang. In fact, it also ends with a bang! This is an incredible game of cat and mouse, delivered to the reader in a dual point of view fashion from both Ainsley and Peter’s perspectives. Chilling and exciting all at the same time.
This is definitely a series that has to be read in order. In fact, I was able to listen to all three books in this series, The Arrangement, The Amendment and The Atonement, as audiobooks with excellent dual narration. That made each of these books that much more intriguing. I listened to these books with bated breath as it was more than evident that things would eventually come to a head. I love it when you think you have figured out a book especially as you get very close to the end. Then you find a humdinger of an ending. And that’s exactly what happens with this third book and one of the best trilogies I have had the pleasure of reading.
Many thanks to Kiersten Modglin and to NetGalley for this ARC for review. This is my honest opinion.
Please enjoy my YouTube video review -

Kiersten Modglin is an Amazon top-30 bestselling author of award-winning psychological thrillers and a member of International Thriller Writers. Kiersten lives in Nashville, Tennessee with her husband, daughter, and their two Boston Terriers: Cedric and Georgie. She is best known for her unpredictable suspense and her readers have dubbed her 'The Queen of Twists.' A Netflix addict, Shonda Rhimes super-fan, psychology fanatic, and indoor enthusiast, Kiersten enjoys rainy days spent with her nose in a book.