Review - Carrie Soto is Back 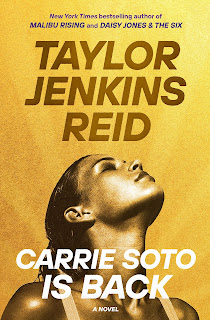 Title:   Carrie Soto is Back
Author:  Taylor Jenkins Reid
Publisher:  Ballantine Books
Genre:   Women’s Fiction
Format:  Kindle and Audiobook ARCs
No. of Pages:   384
Length:  10 Hours and 30 Minutes
Date of Publication:   August 30, 2022
My Rating:   5 Stars
DESCRIPTION:
In this powerful novel about the cost of greatness, a legendary athlete attempts a comeback when the world considers her past her prime—from the New York Times bestselling author of Malibu Rising.

Carrie Soto is fierce, and her determination to win at any cost has not made her popular. But by the time she retires from tennis, she is the best player the world has ever seen. She has shattered every record and claimed twenty Grand Slam titles. And if you ask Carrie, she is entitled to every one. She sacrificed nearly everything to become the best, with her father, Javier, as her coach. A former champion himself, Javier has trained her since the age of two.

But six years after her retirement, Carrie finds herself sitting in the stands of the 1994 US Open, watching her record be taken from her by a brutal, stunning player named Nicki Chan.

At thirty-seven years old, Carrie makes the monumental decision to come out of retirement and be coached by her father for one last year in an attempt to reclaim her record. Even if the sports media says that they never liked “the Battle-Axe” anyway. Even if her body doesn’t move as fast as it did. And even if it means swallowing her pride to train with a man she once almost opened her heart to: Bowe Huntley. Like her, he has something to prove before he gives up the game forever.

In spite of it all, Carrie Soto is back, for one epic final season. In this riveting and unforgettable novel, Taylor Jenkins Reid tells her most vulnerable, emotional story yet.
Link to purchase the book
MY THOUGHTS:
In this remarkable read by the ever-popular Taylor Jenkins Reid, Carrie Soto’s rise to fame was rivaled by her comeback in her late thirties, something rather unheard of in the aggressive and demanding world of tennis.
With a successful and talented tennis player as a father, Carrie came by her talent naturally, training since two years of age. Carrie’s talent only came second to her drive to win. To be the greatest. At any cost. Called the Battle-Axe, Carrie earned a powerful reputation, and sadly this led to her being mostly unliked by competitors, and even some of the public.
An injury and aging out of the sport let her retirement when she was just past 30 years of age. Surgery and recuperation and a six year break seemed to be all Carrie needed to come back to the sport that she loved, the sport that made her a household name. She once again had the desire to achieve more records. Now at the 37 years of age, Carrie was determined to win the highest accolade the sport has to offer, including beating someone that was determined to decimate any records that Carrie had earned over the years. Carrie’s story also showed how unhappy she was at times, and what her motivations were. It also showed how she didn’t have someone special in her life for years and how that eventually began to change.
As someone who really enjoyed the sport of tennis as a younger person, this story proved to be very enjoyable to me. This book smoothly explained the rules and intricacies of tennis and the various matches without making the book sounding clinical. In addition. although I had this as a Kindle ARC, I also received this as an audiobook ARC. That was truly a blessing, because with a full cast of twelve narrators, this excellent book was made even better with all of the voices and the occasional sound effects.
Many thanks to Ballantine Books, Libro.fm and to NetGalley for this ARC for review. This is my honest opinion.
Please enjoy my YouTube video review -
ABOUT THE AUTHOR:

Taylor Jenkins Reid is the author of the New York Times Bestselling novels Malibu Rising, Daisy Jones and the Six and The Seven Husbands of Evelyn Hugo, as well as One True Loves, Maybe in Another Life, After I Do, and Forever, Interrupted. Her books have been chosen by Reese’s Book Club, Read with Jenna, Indie Next, Best of Amazon, and Book of the Month. Her novel, Daisy Jones and the Six, is currently being adapted by Hello Sunshine into a limited series for Amazon. She lives in Los Angeles.
web | twitter