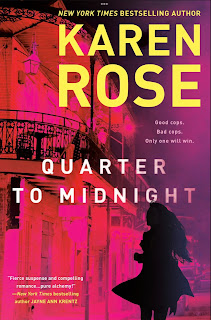 Title:  Quarter to Midnight
Author:  Karen Rose
Series:  New Orleans #1
Publisher:  Berkley Books
Genre:   Mystery & Thrillers
Format:  Kindle ARC
No. of Pages:   608
Date of Publication:   August 2, 2022
My Rating:
DESCRIPTION:
Discover New York Times and USA Today bestselling author Karen Rose's brand-new series set in the sultry, crime-ridden city of New Orleans and featuring a tough team of high-end private investigators who are after justice--no matter what they have to do to get it.

There are good cops. And there are bad cops. The question is...who wins?

After completing her tours with the Marines in Iraq, Molly Sutton knew she could take down any bad guy she met. But when her law enforcement agency in North Carolina turned against her, she joined up with her former CO Burke Broussard, who left New Orleans PD to set up a private investigative service for people who couldn't find justice elsewhere.

Gabe Hebert saw the toll that working for the NOPD took on his dad and decided instead to make a name for himself as one of the best young chefs in the French Quarter. But when his father's death is ruled a suicide after a deliberately botched investigation by his former captain, Gabe knows his dad stumbled onto a truth that someone wants silenced.

Gabe goes to his father's best friend, Burke, for help. Burke assigns the toughest member of his team, Molly, to the case. Molly can't believe she's being asked to work with the smoking hot chef whose chocolate cake is not the only thing that makes her mouth water. Sparks fly as they follow the leads Gabe's dad left them, unraveling a web of crimes, corruption, and murder that runs all the way to the top.
Link to purchase the book
MY THOUGHTS:
Gabe Hebert, chef turned private investigator, works alongside an actual PI, Molly Sutton, to find his father’s killer. He’s able to work with Molly because he initially went to his father’s best friend Burke. It was Burke who assigned Molly to this case.The police ruled the death as a suicide, but Gabe is certain that it was murder, and he wants answers.
Molly is a strong woman. Former Marine, she handles the most dangerous situations with flair, all while drawing closer to Gabe. As you read this exciting book, it’s hard to imagine that it only takes place in the course of one week! That ratchets the danger level even higher, especially considering what the characters experience in the course of that week.
Gabe’s dad was a cop for years, and the job was not easy. In fact, this made Gabe certain that this was not the career he wanted. So, he became a chef. Despite his primary talent taking place in the kitchen, he does an amazing job working with Molly while trying to pursue his father‘s killer.
While Gabe and Molly are working feverishly to find the killer, said killer is leaving bodies left and right. This book is dark, harrowing, and truly intense. It is Karen Rose at her best. With more than one point of view, this book never loses a beat when it comes to pacing.
How exciting that Quarter to Midnight is the first book in a new series by the brilliant Karen Rose! Danger, suspense and romance, blended with intensity and danger, made this book a compelling page-turner. The series is set in New Orleans, and it is truly an atmospheric book as the good guys and the bad guys fight their way to the finish.
Many thanks to Berkley Books and to NetGalley for this ARC for review. This is my honest opinion.
Please enjoy the following excerpt:
Please enjoy my YouTube video review -
ABOUT THE AUTHOR:

Internationally bestselling author Karen Rose was born and raised in the Maryland suburbs of Washington, DC. She met her husband, Martin, on a blind date when they were seventeen and after they both graduated from the University of Maryland, (Karen with a degree in Chemical Engineering) they moved to Cincinnati, Ohio. Karen worked as an engineer for a large consumer goods company, earning two patents, but as Karen says, “scenes were roiling in my head and I couldn't concentrate on my job so I started writing them down. I started out writing for fun, and soon found I was hooked.”

Her debut suspense novel, DON'T TELL, was released in July, 2003. Since then, she has published more than fifteen novels and two novellas. Her twenty-sixth novel, QUARTER TO MIDNIGHT, will be released in 2022.

Karen's books have appeared on the bestseller lists of the New York Times, USA Today, London's Sunday Times, and Germany's der Spiegel (#1), and the Irish Times, as well as lists in South Africa(#1) and Australia! To date, her books have been translated into more than twenty languages.

A former high school teacher of chemistry and physics, Karen lives in Florida with her husband of more than thirty years.