BLOG TOUR - The Locked Away Life 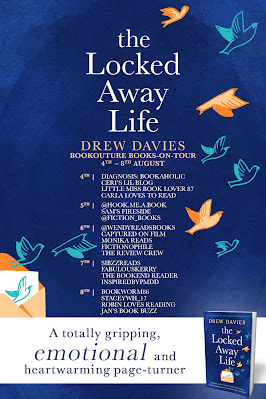 At the grand old age of eighty-two, Esther Saul has just one regret in life. Today, she’s going to change that.
For decades, Esther has barricaded herself in her vine-covered manor house. She spends her days tending to her rose-filled garden, glued to the pages of her favourite books, and listening to her beloved records. But, one spring morning, Esther wakes up and realises that time is running out.
Forty years ago, the love of her life betrayed her – the only man she allowed herself to trust. Where is Thackeray, the handsome Scot with a devilish smile and piercing blue eyes? Will she ever learn the truth? Will she ever understand why he lied to her? Esther has to find out. If she doesn’t act soon, her one regret will haunt her forever…
But she’ll need some assistance. That’s where Bruno comes in. After Esther places an advert in the local library, seeking internet lessons, the eighteen-year-old knocks on her door. Esther can see how out of place Bruno is in their sleepy village, and that the paid position could be his one-way ticket out of there.
An unexpected friendship forms between the two strangers, who have nothing in common except that they have spent most of their lives in hiding. It’s the beginning of a journey – featuring a secret motorcycle ride, an escape plan, and a garden party with whisky, apple pie, and dancing the jig. Along the way, can a locked-away life finally start living?
Just as heartbreaking as it is heartwarming, this utterly gripping page-turner is for anyone who has ever felt left behind, came close to giving up, or needed a friend. Perfect for fans of Sally Page, Ruth Hogan and Mike Gayle.
BUY LINK: 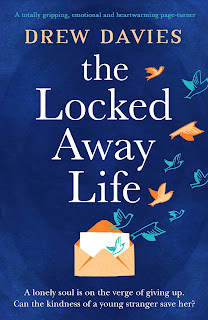 Title:   The Locked Away Life
Author:  Drew Davies
Publisher:  Bookouture
Genre:   Women’s Fiction
Format:  Kindle ARC
No. of Pages:   326
Date of Publication:   August 4, 2022
My Rating:   5 Stars
In this touching story by Drew Davies, an unlikely couple form an alliance. They are octogenarian Esther and eighteen-year-old Bruno. One day while at the library Bruno spots an advertisement for internet lessons. There’s an older lady that wants to learn all about the internet. Of course, when he goes to her home in response to her ad, and tells her what he’s there for, they are definitely not speaking the same language. However, Bruno is more than patient. He is able to ascertain what it is that will end up helping Esther the most.
As the story develops, readers are going to see that Esther is working on secrets of her past, while Bruno‘s secrets will affect his future. How her past and his future ties together is what brings this delightful read to life. In fact, they are both hiding from something. Can their secrets be the catalyst that brings them both together?
Esther slowly unravels the secrets of her past, and the independence that she shows reflect the strong person that she is. Something happened in her life that caused her to become a recluse, and that was what slowly unravels in this story. Meanwhile, we see how sensitive Bruno is, from the relationship that he has with his ailing father, his siblings, and a neighborhood friend from school named Dominic. We also see another relationship in the story, and that is Esther’s relationship with her daughter Jane. Although this book touched on some serious subjects, the story is laced with humor, especially when Esther is trying to learn all the lingo that goes along with the great worldwide web.
While the story is developing, Bruno’s secret leads him to a situation that present danger, and that changed the direction of the story when it came to his relationship with Esther and the whole reason for him working with her. This wonderful story proves that strong friendships can be formed despite a major age difference. Meanwhile, the author did not shy away from dealing with a very tough subject in this book, that of conversion therapy and its dangers. Interestingly, this book had two prologues just as it had two epilogues. This played into the fact that there were two powerful stories being told in this most engaging and emotional read by Drew Davies.
This was an utterly compelling story that made it very easy to connect with both characters. They were more than relatable which made it easy to root for both of them. The title of this book, The Locked Away Life, and it’s beautiful cover, showed how each of our characters were locked within the confines of their lives but yet they were able to find their way out. This gave this book relevance while delivering a beautiful message of hope.
Many thanks to Bookouture and to NetGalley for this ARC for review. This is my honest opinion.
Please enjoy my YouTube video review -

Drew Davies was born in London and grew up in Whanganui, New Zealand. He attended the Unitec School of Performing Arts in Auckland and won a Playmarket New Zealand Young Playwright of the Year award in 2000. After a brief stint on a kiwi soap, he has worked in Search for the past 15 years. Drew’s other claim to fame is that Stephen Fry once called him droll. Either that, or he got his name wrong. He now lives in Wanstead, London.
https://www.instagram.com/drewdavieswriter/
https://twitter.com/Drew_Davies
Sign up to be the first to hear about new releases from Drew Davies here: https://www.bookouture.com/drew-davies